TV Review: 24 Hour Days Only Thing That Will Stop ‘Shades of Blue’ 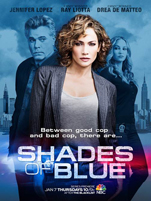 Sometimes it is a shame that 2016 represents the best of times in television and the worst of times.

With the exorbitant amount of network channels and video on demand platforms like Netflix, Amazon Prime and Funhouse TV, there are literally thousands of good television shows.  The aforementioned facts make it the best of times.

The fact that there is only 24 hours in a day makes it almost impossible to absorb all of the great TV shows.  That fact makes it the worst of times for television executives.

NBC’s “Shades of Blue” is definitely a great show.  It has a great storyline and great actors like Ray Liotta.

However, Thursdays at 10 p.m. EST is not a great timeslot considering that Shonda Rhimes owns Thursday nights with shows like “How to Get Away with Murder” for ABC.

“Shades of Blue” will pit the lovely Jennifer Lopez against the legendary Viola Davis in “How to Get Away with Murder.”

May the best woman win.  And let it be known, that both actresses are great.

Harlee Santos (Lopez) is a single mother and police officer struggling to give her talented daughter the best in life.

Although she makes a living, her salary as a cop is not enough to maintain a household and pay tuition for her daughter at Julliard.

She has support from colleagues like Wozniak (Liotta) but still struggles maintaining her daily lifestyle.

Although her colleagues represent a family-type structure, many families unfortunately are dysfunctional.

Their dysfunction comes in the form of extortion from gangsters and murder cover-ups.

Despite the dysfunction, there is a sense of loyalty just like in every family and every gang.

When an extortion plot goes wrong, Harlee is given an ultimatum.

Wear a wire so that the FBI can infiltrate their local police department or face jail time for her crimes.

“Shades of Blue” has brilliant performances as to be expected with the likes of Liotta and Drea de Matteo (Tezz Nazario).

Although Lopez is not the greatest actress, she holds her own with the legendary Liotta.

As expected, she also brings unintentional sexiness to her character.

The storyline in “Shades of Blue” is nothing new.  It has been done before numerous times like in “Black Mass” on the big screen.

The emotion that Liotta shows when he discovers there is a “rat” in his organization can be felt through the screen.

Unfortunately, “Shades of Blue” is to law enforcement what “Concussion” is to the National Football League.

Although, “Shades of Blue” is not a true story it could be.

That truth is a shame.

But “Shades of Blue” capitalizes on that shamefulness.

It will also be shameful if television connoisseurs do not check out this show.

And if it does not have legs, it will also be shameful but only because of stiff competition.