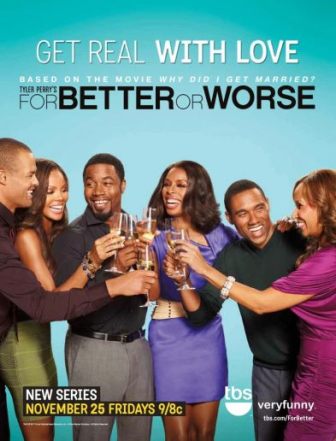 Introducing the Cast of “Tyler Perry’s For Better or Worse”

On a rainy Tuesday afternoon in Houston, critically acclaimed actress Tasha Smith and Miss USA 2008, Crystle Stewart met with Regal Magazine publisher Todd A. Smith.  The discussion centered on the new “dramedy” “Tyler Perry’s For Better Worse.”  Whether you love or hate Perry, according to Smith, you definitely should not put the man in a box, because “Tyler Perry’s For Better or Worse,” which premieres Friday, Nov. 25 with back-to-back episodes at 9:00 PM and 9:30 PM central time is not a show that can easily be placed in a box.  It definitely has something for everyone.

Todd: Nothing much.  Most of Tyler Perry’s shows are sitcoms.  How do you think his fans will respond to a more dramatic type of show from Tyler on television?

Tasha: They’re gonna love it.  They’re absolutely going to love it.  And not only are they going to love it, but they’re going to be so proud of this show as Black people.  They’re going to be grateful that Tyler created it, shot it, and made it happen because we need to see ourselves on television.  It’s not a lot of diversity on TV as it is, so this show is not only great, it’s funny, it’s dramatic.  It has a beautiful cast, but I’m telling you people are going to be proud of this show.  If they think it’s going to be like “Meet the Browns” or “House of Payne,” no.  It’s different.  It’s unlike anything else on TV to be honest.

Todd: We talked about the lack of diversity and we definitely don’t have a lot of diversity on TV.  Most of Tyler Perry’s fans look like us, but he has a lot of fans, because of the Christian background, that don’t look like us.  What do you think when you hear people criticize him, for not being as diverse as some of his fans should want him to be?

Tasha: I don’t agree with it.  Yes, there’s a huge urban following, but guess what?  A lot of White people come up to me, and say “You were in Why Did I Get Married.”  Tyler Perry has fans across the board because the stories connect to the urban community, but they are universal.  Even this television show, “Tyler Perry’s For Better or Worse,” it’s not just a Black show about Black circumstances.  Relationships are universal.  Guess what?   White people have baby mama drama too.   Not just Black people.  White people, Asian people, Spanish people have relationship issues.  It’s not just a Black folk’s thing.  It’s a universal thing.  That’s what’s so wonderful about Tyler.  When they think they got his number, he comes back with something on another level.

Todd: What can viewers expect from (your character) Leslie?

Crystle: Leslie is the one who looks at the optimistic side.  She looks at the glass half full instead of half-empty.  (She’s) the peacemaker of the group.  She’s very passionate about her relationship.  She has a wonderful boyfriend and a great best friend, Angela.  And she’s very real with them; she’s very honest and true.  Anytime they need advice they come to her and she gives them the right answer.  Even though they might not always wanna hear it, I stay true to them.

Todd: How has your story of perseverance through beauty pageants influenced other people? And how did you make the turn into acting?

Crystle:  I’ll answer the first one.  It took me five times to win Miss Texas and I live by the three P’s, being persistent, persevering and patience, with whatever goal that you have.  I call it waiting to win.  I think it helps people with whatever goal or dream that you have keep going.  You might have some let-downs and fall backs, but God has the perfect timing.  When it’s your time, you will win.  And your second question, I won a scholarship to the New York Film Academy and I said let me give this a try.  I was never really interested in acting, didn’t think I could do it, but I said let me give this a try.  So, I did it.  The teacher said I did pretty good (and) I thought I did pretty good, so I said let’s give it a run.  So, right before I graduated, I met Mr. Perry, auditioned for the show, (and) he offered me the role and then I didn’t even graduate.

Todd: Angela is a popular character let me say that. My mother won’t call you Tasha Smith, she calls you Angela.   Angela has a specific personality.  How will the character change or grow in “Tyler Perry’s For Better or Worse?”

Tasha:  I feel like you’re going to see many dimensions of Angela.  Because in the movie, you have a certain amount of time to show them, so you usually only see one aspect of their relationship in the movie.  As far as the television show is concerned, you’re going to see her as a mother.  You’re going to see her as a businesswoman.  You’re going to see her in her relationship, as far as her friendships are concerned.  How she runs her household as woman.  When she makes mistakes, how she tries to recover from the mistakes she may have made.  You’re not going to just see Angela mad and upset, but you may see the reasons why she’s upset.  I’m sure we’re going to explore some of her history, as far as her fears, her insecurities, rejection issues, abandonment issues.  All those things that make her so reactive and I feel that the audience is going to grow with her and see her journey of growth as a woman, as a wife, as a mother and as a businesswoman.

Todd: What would you say to those critics that think Angela is just a stereotypical Black woman?

Tasha: As a woman, people can honestly say, if they’re honest and look into their relationships and look at the reason why people connect with Angela.  It’s because she’s transparent.  Everybody else might hide their flaws and constantly put on their public persona…when they’re dealing with relationships.  You have people in marriages right now that are dealing with some major issues at home with their wife, but it’s just not as transparent to their public.  But you’re almost like a fly on Angela’s wall with her personal friends and her husband.  It’s not that she just wants to be a loud, Black woman.  Yes, she’s reactive sometimes because she’s passionate.  And when you’re passionate and you’re in love deeply and when you have trust issues, you may end up being reactive.  And guess what?  Marcus is not no punk.  If they really took a good look at their relationship, without judging it, they will see Marcus is a real man.  He is patient.  He loves Angela like Christ loves the church.  You know when they say love suffers long.  Love is patient.  It’s kind.  To me, Marcus’ character shows all those aspects of a true man with his wife.  He was willing to make a commitment to her and he’s willing to love her through her issues and her flaws.  And he’s the bigger person.  He doesn’t have to fly off the handle because she’s trippin’.  But, he’s patient in his belief that she’s going to get the picture and that’s the kind of growth you’re going to see with Angela and Marcus.  I just feel like people see it the wrong way.

Todd: Crystle, what are your future goals in film and television?  In addition to “Tyler Perry’s For Better or Worse,” where do you see your career going?

Todd: How has your public speaking background with the pageants and motivational speaking after winning Miss USA, how has that affected your acting?

Crystle: It helped a lot.  I learned how to communicate with different types of audiences and you speak to them in different ways.  I know Black people normally they go to church, and they want to hear God and they want to hear Scriptures.  I know different groups they want a little more humor or something like that.  I know how to talk to different types of audiences.  With acting, I know how to be more appealing to the audience and speak through the camera and really be more personable.  I think I learned that not even in acting school, but through the pageants.

Todd: I want to go back to Marcus and Angela.  How similar is Angela and Marcus’ marriage to your marriage?

Tasha: First of all, my husband wouldn’t be going for it.  And with Marcus, he is not no punk, I mean Michael Jai.  But there are no similarities at all because we don’t have that kind of relationship.  That’s just not where our marriages are.  Not that our marriages are perfect all the time, we’re human beings.  But, we’re not necessarily going through the stuff that Marcus and Angela are going through.  They’ve been married 13 years.  They’ve had different circumstances and situations that they’ve encountered.  But we can pull from other aspects of relationships.  And what’s interesting, and I don’t know if you know this, Michael Jai and I dated.  We dated almost 10 years ago and when Tyler brought us together to play the roles in Why Did I Get Married? he had no idea that we had dated.  But I think that’s where the chemistry comes from with him and I.

Tasha: It’s given me a deeper sense of compassion.  And I feel personally as actors, we have to be compassionate towards every character that we choose to take on because it’s telling a human story, dealing with humanity in real life.  It’s not for us to judge. I would never judge Angela.  I have to understand why she’s the way she is…Healing comes in when you’re moved with compassion.  Even when Jesus went out and healed, he was moved by compassion.

Todd: Where are you with the Donna Summer biopic?

Tasha: Donna ain’t feeling me.  That’s my dream but I don’t know if that’s going to happen.

Todd: I’m going to have to call Donna.

Todd: When all is said Ms. Stewart how do you want to be remembered?

Todd: What’s up with Why Did I Get Married 3?

Crystle: We should do one with new friends!

Tasha: All I have to say is you never know what Mr. Perry has up his sleeve.