Five TV Shows That Should Be Adapted into Films ASAP 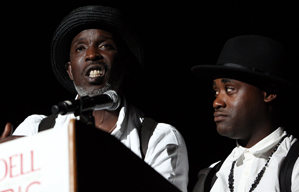 Talented actors like Michael K. Williams (left) who played Omar and Tray Chaney who played Poot made “The Wire” one of the most beloved TV series of all time (Photo Credit: Icon Sportswire via AP Images).

Let’s keep it all the way 100.  Hollywood likes to recycle hits.

“Entourage” was a fantastic film, and let’s hope that “Limitless” is as fascinating on the small screen and without regular appearances by Bradley Cooper as it was on film.

But what other TV franchises should Hollywood dust off and recycle as a film?

RegalMag.com formulated a list of the five television series that should get the big screen treatment.  Did we hit the nail on the head with our list or did we totally whiff on the target?

Check it out below and let us know if our list is genius or idiotic.

“Breaking Bad”—What ever happened to Jesse Pinkman yo?  The meth head that teamed up with his former high school teacher to form the biggest crystal meth operation in New Mexico was the only player who made it out of the series finale alive.  Saul (Bob Odenkirk) got his own show, the prequel “Better Call Saul,” but what happened to Jesse (Aaron Paul), Flynn (RJ Mitte), Skyler (Anna Gunn) and Marie (Betsy Brandt) after Hank (Dean Norris) and Water’s (Bryan Cranston) death.  Did Jesse get back into the drug game?  Was Skyler able to make ends meet?  How did their daughter endure childhood without her father and were there any reprecussions that the family faced because of all the people Walter crossed?  Inquiring minds want to know.

“The Sopranos”—HBO’s “The Sopranos” is considered by some as the best series in the history of the TV industry.  The show about Tony Soprano (James Gandolfini) juggling his duties of heading his real family and his crime family won numerous awards, resulted in video games, books and other forms of merchandising.  Unfortunately, it has not resulted in a film, and would likely be too bittersweet with the loss Gandolfini.

“The Wire”—Baltimore has been in the news constantly over the last few months in regards to police brutality and the death of Freddie Gray.  Anyone that has ever watched HBO’s “The Wire” was probably shocked at how accurate a picture the hit television show painted of that city.  The show depicted how the cops routinely roughed up the citizens, but it also showed why the police responded to the citizens in such a way.  “The Wire” showed a city engulfed with drugs and violence, distrust for law enforcement officials and good law enforcement officials desperately trying to lower the crime rate.

“Prison Break”—The Fox series “Prison Break” is sometimes forgotten with all of the recent late night soaps that have flooded the airways.  But “Prison Break” should have been a much bigger phenomenon and should have made a killing in merchandising and spin-offs.  In the series, Lincoln Burrows (Dominic Purcell) is wrongly convicted of killing the vice president’s brother.  He has been set up by a crooked agency to take the fall in the murder, but his brother, structural engineer Michael Scofield (Wentworth Miller) devises a scheme to get incarcerated and break his brother out of prison.

“Lost”—ABC’s “Lost” was the dramatic version of “Gilligan’s Island” and it definitely produced high drama.  The J.J. Abrams-created show centered on survivors of a plane crash who are forced to come together to survive on a deserted tropical island.  “Lost” also dealt a lot with science fiction and the supernatural.  Sixteen million viewers watched the pilot episode and the sixth and final season averaged 11 million viewers per episode.