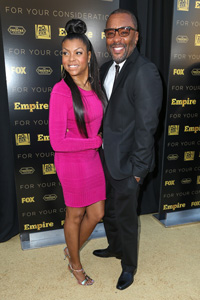 Black soap operas like Lee Daniels’ (right) “Empire” have given Black stars like Taraji P. Henson (left) more opportunities in front and behind the camera (Photo Credit: Paul A. Hebert/Invision/AP).

That is probably because Hollywood has long been an industry that made it hard for Black talent to get their chance behind or in front of the camera for whatever reason.

However, because of the popularity of Black soap operas or dramas, many Black writers, directors, editors, producers and stars are getting an opportunity to showcase their talent.

So while many protest the so-called stereotypical portrayal of “Black life” on shows like “Empire” or “Being Mary Jane,” let us appreciate the barriers that are being broken because of visionaries such as Mara Brock Akil, Salim Akil, Tyler Perry and Lee Daniels.

According to Variety, six of the nine writers on “Empire” are people of color.

“We’re getting to tell the American dream from the Black male point of view, which has been done in music for 40 years, but for whatever reason hasn’t made it to television.  That’s pretty thrilling,” Calhoun added.

For years, the Black community could brag about many successful sitcoms that portrayed Black experiences, but very few Black soap operas hit the small screen.

Even when Black sitcoms were at their summit, many of the shows like “Good Times” consisted of predominately White writers and producers attempting to tell Black actors and a Black public what authentic Black life was about.

“Working on ‘Good Times’ was real hard,” said creator and script supervisor Eric Monte.  “All the White writers wanted to do stereotypes and I refused.  Every week we’d argue and fight.  They would ignore what I suggested and take all that ‘Yassuh Boss,’ stuff to the cast and John Amos and Ester Rolle would have a fit.”

Despite the success of Black soap operas and more opportunities for Black writers and directors, many still see the portrayal of Black life on television as stereotypical.

But with the success of so many Black soap operas, what we have in Hollywood is a renaissance of the Black artist.

Not since the days of the Harlem Renaissance has Black life been at the forefront of American pop culture when it comes to the theatrical arts.

Furthermore, what is more fascinating is that this time African-Americans are getting the opportunity to tell their own stories, not having someone of a different hue give their perspective of the Black culture.

Many predominately White shows like “Breaking Bad” and “The Sopranos” portrayed the gangster and criminal lifestyles.  Were those shows seen as stereotypical to Whites or were they celebrated for their art?

While many in the African-American will not embrace all of the images of Black life on the small screen, let us embrace the talent bringing that art to the light.

Let us celebrate the fact that veteran actress Regina King gets to direct shows like “Scandal” and “Being Mary Jane.”

Let us celebrate the genius that is Debbie Allen, who has directed episodes of “Empire,” “Scandal,” “Grey’s Anatomy” and “How to Get Away with Murder.”

Let us celebrate relative newcomers like Attica Locke who is making a name for herself as a respected Hollywood writer thanks to “Empire.”

Additionally, shows like “Empire” have allowed veteran film directors like John Singleton (“Boyz N The Hood”) the opportunity to direct television for the first time.  Singleton now has a new television show in development called “Snowfall” according to XXL.

Therefore, at a time when Black filmmakers, especially Black female filmmakers, are still fighting for respect in Hollywood, it seems as if they need the support of the Black community more than the criticism.  Because Hollywood is cyclical and when the fad of Black soap operas dies down, so will the opportunities for Black talent.