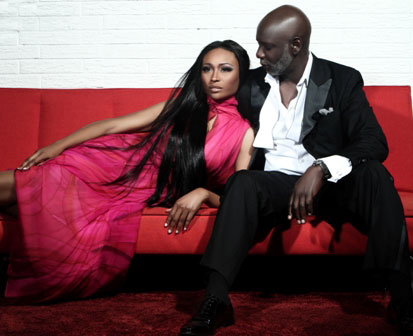 Cynthia Bailey and Peter Thomas of “The Real Housewives of Atlanta” share their secrets to a successful marriage in their new memoir (Photo courtesy of Double XXposure Media Relations).

Reality Shows are What You Make It

“I approach a marriage like a business; a business acquisition,” Peter Thomas of “The Real Housewives of Atlanta” told Regal Magazine.  “If you want your marriage to work, it’s a working relationship.  You have to work hard in it in order for it to work.”

Thomas’ approach to his marriage with “The Real Housewives of Atlanta” star Cynthia Bailey has not only provided a boost to his many business endeavors, but their strong marriage, which is not stereotypically seen in Black reality shows, has been an inspiration for many couples struggling with the demands of marriage.

Their experience with marriage after the age of 40 is the motivation behind their new book Carry on Baggage: Our Nonstop Flight, which is in stores everywhere this month.

“We didn’t know that’s how it was going to come (across on television),” Thomas said of their positive marriage.  However, they have shown what a great example Black reality shows can be when it comes to marriage and relationships.

Like all marriages, couples who marry after the age of 40 bring their own personal baggage into their union.  Whether it is personality differences, children from other relationships or dealing with the parents of stepchildren, every marriage has its cross to bear.

However, Thomas believes that it is up to parents and stepparents to work together, because biological parents are always going to be a part of their child’s life and it takes maturity to accept another person of the opposite sex playing a part in one’s marriage.

And although their marriage gives Black reality shows a much needed positive example of a strong relationship, they did not go into the show with that intention.  Thomas and Bailey just wanted to keep it “100” by being honest and truthful.

Furthermore, Thomas said it was important to provide an example for Bailey’s daughter because they did not want her to see her mother shacking up with some man.  They wanted to provide a positive example for their children, not just those watching on Bravo.

Although Thomas does not watch many reality shows, he is aware of the criticism that many in the Black community have for some Black reality shows.

However, Thomas feels that it is up to the individual to how they want to be portrayed and he believes many celebrities on Black reality shows make a conscious effort to display over the top drama when in front of the camera.

“They can’t use anything you haven’t given them,” Thomas said.  “If you don’t give it to them, they can’t use it.”

“I’m a grown man and I want to be respected as a grown man,” Thomas explained.

He is also the epitome of the word entrepreneur and being on arguably one of the hottest Black reality shows is definitely good for business because the 20 million people who watch “The Real Housewives of Atlanta” now know his name and face.

With his company, The Peter Thomas Entertainment Group (PTEG), Thomas has dominated the dining and nightlife scene for decades.

He has pioneered magazines, helped bring hip-hop to the United Kingdom by working on tours for artists like Dr. Dre, Snoop Dogg, ONYX and Public Enemy.  Thomas is also responsible for launching the Source Awards.

His latest business venture is the upscale lounge experience, bar One, which is currently in Atlanta with openings planned for Charlotte, N.C.

Bailey is no lightweight in the field of business either.  She is the founder and CEO of the modeling and fashion school, The Bailey Agency.

While others shy away from working with their spouse, Thomas believes that he and Bailey balance out each other’s shortcomings, making the perfect business tandem.

Furthermore, he absolutely loves being around his wife and vice versa.

And while many marriages fail, Thomas and Bailey have learned how to find the perfect balance between intimacy and business, giving many couples the blueprint to building the perfect marital foundation.