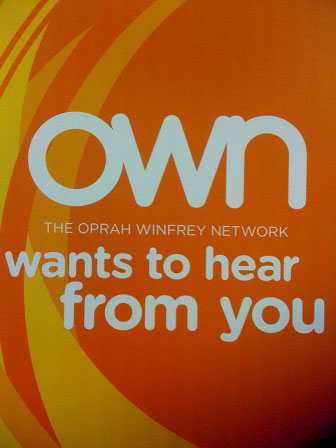 OWN was once criticized for not being diverse enough, now entertainment reporter Jawn Murray jokingly calls it Black Lifetime (Photo Credit: OWN).

Since OWN network’s launch in 2011, its search for content that’s the perfect fit for viewers has been widely reported as not diverse (see Regal’s 2011 article “Is Diversity in Television Important to Oprah, OWN?), boring and even irrelevant.

Fast forward two years,  OWN’s first reality show adoption “Finding Sarah,” about Sarah Ferguson, Duchess of York, rebuilding her life has been dethroned by “Oprah’s Next Chapter,” a show similar to her talk show except she visits the celebrities in their surroundings.

And the real keeper of the glass slipper that seems to be a perfect fit for OWN viewers is Tyler Perry’s scripted soap “The Haves and the Have Nots,” revolving around the lives and loves of a wealthy family and their help. It is OWN’s first foray into scripted programming (OWN content also includes Perry’s comedy series “Love Thy Neighbor.”) and its Oprah Winfrey’s exclusive partnership with Perry that has propelled the network to record ratings.

According to Bloomberg Businessweek, Perry’s shows have increased OWN’s ratings by nearly 40 percent among women aged 25 to 54.

In addition, Nielsen ranked OWN the top five cable network on TV among African American women within the target age group in June.

It’s a surprising about face for a network faced with dismal ratings, sagging revenue and snarky newspaper headlines circling Harpo Studios like vultures after easy prey just 24 months ago.

But if the OWN network saga has played out like the perseverance-always-wins childhood book “The Little Engine That Could,” it’s the predominately African American shows that are chugging OWN content down the track.

Nevertheless, some fans are still unsure what station she’s attempting to pull into, or better yet how OWN’s content relates to the Winfrey brand.

“She had to rebrand the network and (now) she’s realizing her primary audience will be African Americans,” shares Mark Anthony Neal, professor of African American Studies at Duke University and creator of New Black Man blog. “White viewers were comfortable having to come into her space on a broadcast network, but didn’t love her so much to follow her on her own network.”

A pretty spot-on account considering media research firm Horizon Media reported OWN content attracted a viewership one 10th the size of what her talk show received.

However, given the musical chairs of OWN content, ratings have slowly increased from 262,000 prime-time viewers during OWN’s launch to 353,000 during the first quarter of 2013.

“What she’s done is create a new audience for herself (that is) largely African American and it’s a much smaller audience,” offers Neal, who wrote “Post-Modern Mammy? The Oprah Legacy” on his blog.  “She’s reaching a very different demographic and I think she’s found an audience of devotees that don’t look like the fans of her talk show.”

Michele Grant, Dallas based author and creator of Black ‘n Bougie blog that covers all things considered bourgeoisie, is a long time fan of Winfrey along with her mom, but is confused about OWN content.

“There’s parts of OWN I love and parts I hate,” explains Grant, a viewer of OWN since 2011. “I wish she would find a sweet spot [that would be] a middle ground. One of the things I was dying to see was original scripted shows that aren’t reality based.”

Enter famed playwright/movie director Perry. Last fall, Winfrey and Perry announced their collaboration to bring scripted OWN content, and sealed the deal by using their bigger than life and centuries apart alter egos “Color Purple’s” Sofia and Madea together to promote the alliance.

However, for some Winfrey viewers it illustrated how their respected brands are worlds apart.

“I guess [Winfrey and Perry] were trying to make light [of the partnership] for the critics,” says Wendy Todd, creator of entertainment blog Cocoa Popps of the OWN promo. “It just highlighted how different their brands are. Tyler Perry joining OWN isn’t consistent with her brand. It would have been if the quality of the programming was heightened.”

For Eva Vega, Los Angeles diversity trainer and public speaker, it wasn’t. This spring, Vega started an online petition to get Perry booted from the OWN network. Vega said the change.org petition, which has only garnered 317 signatures so far, was born out of a combination of her 14 years studying diversity issues ( i.e. homophobia, sexism) and her personal dismay of Perry’s style of entertainment being part of OWN content.

“I remember friends going to see [Perry’s] plays in Newark, N.J. and it would be a multigenerational crowd: aunts, grandmothers, and they would come back and feel conflicted because [his form of entertainment is] kind of polarizing,” recalls Vega.

Vega admits she has not seen full episodes of “The Have and the Have Nots” or “Love Thy Neighbor,” but immediately reacted to the promos.

“[I] had a visceral reaction for the promos of ‘Love Thy Neighbor,’” shares Vega. “It’s this over the top thing. He’s creating these Mamie arch types of buffoons, which is really problematic. ‘The Haves and the Have Nots;’ I don’t do soap operas, so haven’t watched it.”

Grant has watched both shows and shares the same sentiments as Vega, but realizes there are some truths in Perry’s portrayal of African Americans.

“‘The Haves and the Have Nots’ is ‘Dynasty’ meets ‘Good Times’ meets ‘Soul Plane,’ says Grant. “‘Love Thy Neighbor,’ I didn’t find it to be funny. I found it to be over the top.”

Grant goes on to say that upon hearing about the Perry-Winfrey collaboration for OWN content she was immediately disappointed.

“My heart sank when I heard they were partnering up. There is a basic split in African American communities,” explains Grant, who wrote blog post “The Problem with #OWN: The Oprah Winfrey Network.” “Don Lemon feels there are ‘respectable Negroes and hood Negros.’  I think everybody has a little of both and them, including me.”

Despite the backlash and panned reviews, Perry’s “The Haves and the Have Nots” consistently averages one million total viewers on Tuesday nights.

With this series included as OWN content, it has ranked number two in its time slot on cable, nabbing the female demographic (aged 25-54) for five weeks in a row.

It’s not shocking news to Jawn Murray, entertainment commentator and creator of Always A List, an entertainment news site, who believes Winfrey and Perry’s creative visions are more alike than people think.

“Their beginnings are similar; both had very hard knock beginnings,” offers Murray. “So with that in mind, they have more similarities. In essence they both possess, live your best life [mantra], both optimistic and have Christian principles.”

Murray says it took more than Perry to push the OWN network to finally turn a profit this year.

“We can’t discredit ‘Welcome to Sweetie Pie’s,’ ‘Iylana Fix My Life’ series. All these shows are viable, all of them have become ratings juggernauts,” reports Murray. “In addition to ‘Super Soul’ series; they have all performed very strongly.”

“What was perceived as Oprah’s core audience is not there anymore; if they were her core audience they would have followed her. So, now she’s going for a more multicultural diversity grid. I jokingly call it the Black Lifetime,” Murray adds.

And how does the Black Lifetime aka OWN content appeal to men?

Despite research from Horizon Media that shows three women are watching the OWN network for every man and is slightly more female than Oxygen, Murray says OWN content is for men too.

“Listen, men have always given Oprah a hard time. I believe Oprah embodies living your best life, those stories and messages, you find elements in those shows,” says Murray who highlighted “Raising Whitley,” a show about actress and comedian Kym Whitley who decides to adopt a baby and her friends help her raise him, as a nontraditional program that can appeal to both genders.

Jacky Jasper, Los Angeles blogger of Diary of a Hollywood Street King website, says Winfrey will have to dig deeper to have OWN content appeal to men.

“She never makes programming for men,” declares Jasper. “We need to see more dudes like [TV anchor] T.J. Holmes, more newsworthy stuff of what’s happening in the inner city instead of the fluff.”

What viewers are seeing is OWN network’s content being narrowed around familiar terrain that viewers recognize as BET, TV ONE and Centric, which begs the question is the OWN network too Black?

“I think right now it may seem skewed toward Black programming with the shows that have given the network more visibility (Iylana, Sweetie Pie’s and the newer shows like Kym Whitley) and the addition of Tyler Perry that got so much attention,” writes Todd in an email response. “But other signature shows still target Oprah’s traditional core audience of middle class, White women; ‘Super Soul Sunday,’ ‘Lifeclass,’ ‘Masterclass,’ etc. I think Oprah’s traditional core audience could shift away from the network as a result of a shift in the Oprah brand,” Todd concludes.

In a recent interview with Metro New York, Winfrey revealed that her brand appeals to everyone.

“I feel I have made a living being myself. I’ve made a career out of my own authenticity. I don’t have one face I present to the White world or to the Black world.”