Learn How To Succeed in Entertainment Business at MPAC Tour 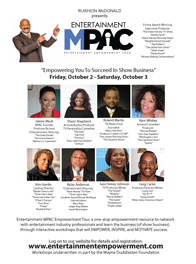 Learning from the Vets

Have you ever wondered how celebrities got their big break in Hollywood?

Sure everyone’s success story differs, but what if you could learn the dos and don’ts from the best in Hollywood, even if you cannot afford a trip to Los Angeles?

Well if you are near Houston, Atlanta, Chicago, Los Angeles and Washington, D.C. you are in luck because the Mack Performing Arts Collective (MPAC) has teamed up with some of Hollywood’s heaviest hitters to empower, inspire and motivate all of those eager to break into the business.

The MPAC tour stops in Houston on Oct. 2-3 at the University of Houston Central Campus Student Life Center, located at 4800 Calhoun Road.

“I am ecstatic about this collaboration because it has always been my goal for MPAC to make an impact on the entertainment industry,” said MPAC founder, attorney Jalene Mack.  “We do just that when we connect entertainment industry resources to those that do not have access otherwise, which creates opportunities to be successful in this business.”

Some of those industry resources will come in the form of Emmy Award winning Executive Producer Rushion McDonald (“Steve Harvey”), who collaborated with Mack to create the “Entertainment MPAC, an Entertainment Empowerment Tour,” which is a one-stop shop entertainment resource tour.

“With this Entertainment Empowerment Tour, I want to pull back the curtain and help people to better understand the many job opportunities that exist in the Entertainment Industry and to let them see that it’s not the celebrities that have the power, but the people behind the camera,” said McDonald.

Sessions of the tour will cover everything from casting, building a successful comedy career, developing a project to the legal expertise needed to get the best deal possible.