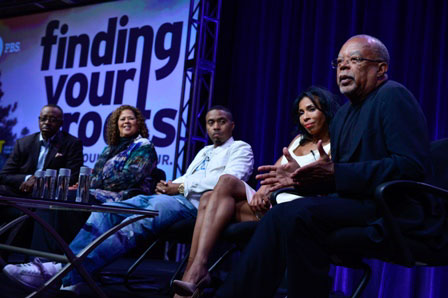 The Ability to Stand Up Straight

Actor Courtney B. Vance never knew much about his lineage.

His father, Conroy, grew up under the care of his foster parent John B. Cooper and like many African Americans his mother did not know much about her heritage because of the atrocities of slavery and segregation.

However, when Henry Louis Gates of “Finding Your Roots” presented information to Vance that his ancestor John Janey was a runaway slave who had escaped to freedom, served in the Union army and even marched at the funeral procession after President Abraham Lincoln’s assassination, Vance replied, “my back is a little straighter.”

Although he is still uncovering the story of his paternal ancestors, that little bit of knowledge about Janey was enough to make a proud man even prouder.

Those revelations are common for participants of the PBS show “Finding Your Roots,” which begins its second season on Sept. 23 at 8 pm ET.

The revered Harvard professor has made a huge contribution to the African diaspora by uncovering the lineage of many prominent African Americans, but like many historians the knowledge of their own history and the knowledge of all history is on equal footing.

Gates is even able to teach novelist Stephen King a thing or two about the story of the King family, which is actually the Pollack family.

King is mesmerized to look at a picture of his father, who abandoned the family when he was 2 years old, and see the striking resemblance the two share.

Gates is able to uncover that the Pollack family had its roots in Ireland, and that his ancestors, which included a Methodist minister, were so against slavery that they relocated to Indiana and fought for the Union army.

“Finding Your Roots” is also able to tell actress Gloria Reuben who has always struggled with her mixed ancestry that she is 59 percent European.

Her father’s family was forced to flee Spain in the 1400s for Jamaica when they refused to convert from Judaism to Catholicism.

Reuben’s mother is of African ancestry and Gates is able to locate her first relative to land in Jamaica after the Middle Passage, information that often eludes most people of African decent.

The show is simply fascinating because it brings the history books right to one’s front door steps.

It’s especially fascinating for the African American community because we have heard vague stories of our ancestry but usually not our own personal story.
Those newly uncovered stories tell a person a little more about themselves and their family and it gives them clues into their own idiosyncrasies and family cultures.

For many people who are upset about the actions of family members they can soon realize the meaning behind all of the good and bad choices made by one’s family members.

However, “Finding Your Roots” might only be a fascination for a certain subsection of American society.

Those who are intrigued about the world’s history will love it while others may become bitter about the struggles our ancestors had to overcome.

Nevertheless, Gates has lit a fire in the hearts of many Americans to fully understand the stories that led us to our current station in life.

The facts will undoubtedly make us appreciate our heritage and make us stand up straighter because of the burden that they carried on their backs to give us a better tomorrow.