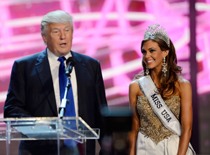 Fired by Univision and NBC, Rehired by Reelz

Since announcing his bid for the GOP presidential nomination, Trump has offended many in the Latino community resulting in him losing deals with Univision, NBC Universal, Macy’s and several Miss USA judges and performers.

According to the Associated Press, “Trump’s presidential campaign announcement contained his assertion that some Mexican immigrants to the Unites States bring drugs and crime, and some are rapists.

“The comment struck many Latinos as insensitive, and Univision’s decision last week to back out of televising Miss USA and break off its business ties with Trump led to a cascade of others following suit.”

Despite being fired by Univision and NBC, the controversial business mogul and aspiring politician has been rehired by the cable network Reelz to air the Miss USA Pageant on July 12.

“The decision on the part of Reelz to acquire the rights to the Miss USA pageant was based on our belief that this special event, and the women who compete in it, are an integral part of American tradition,” said Reelz CEO Stan E. Hubbard in a statement.

According to CNN Money, “Reelz says it’s available in 67 million of the roughly 100 million cable-connected homes in the United States.  It is hard to find on some channel lineups, however.”

Likewise, former judges and scheduled performers will be impossible to find on the latest reincarnation of the Miss USA Pageant.

NFL Hall of Famer Emmitt Smith has backed out of the pageant, as has scheduled performers like rapper Flo Rida and country singer Craig Wayne Boyd, winner of “The Voice” last year.

Despite the controversial comments about the Latino community, Trump has remained defiant throughout the ordeal.

“Both Macy’s and NBC totally caved at the first sight of potential difficulty with special interest groups who are nothing more than professional agitators,” Trump stated.

The Baton Rouge, La. based pageant will continue as scheduled despite broadcasting on a more obscure network.

“As one of only a few independent networks, (Reelz) decided to exercise our own voice and committed ourselves to bringing this pageant to American viewers everywhere,” Hubbard said.

Additionally, the PGA Tour, LPGA Tour, USGA and PGA of America stressed that Trump’s views do not reflect their views.  Trump had previously stated that he received “tremendous support” from the golf community “because they all know I’m right.”

However, it remains to be seen whether Trump will receive tremendous support from minority communities after his negative remarks about Mexican-Americans.

Nevertheless, he is currently number two in the polls against other GOP presidential hopefuls in states like Iowa and New Hampshire.

According to the Washington Post, “In Iowa, Trump is tied with Ben Carson for second place behind Wisconsin Gov. Scott Walker with 10 percent, according to a Quinnipiac University survey released last Wednesday.  In New Hampshire, a CNN-WMUR poll last week had Trump in second place behind former Florida governor Jeb Bush with 11 percent.”