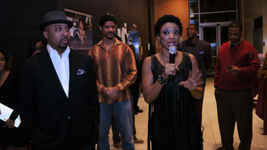 For some media professionals, working with celebrities like Steve Harvey, Wendy Raquel Robinson and Thomas “Nephew Tommy” Miles would represent the pinnacle of success.

However for entertainment attorney and actress Jalene Mack, success does not just mean cultivating relationships with celebrities, it also means taking what she learns from those celebrities and inspiring the next generation of celebrities.

On Feb. 8, Mack hosted the third annual Black MPAC (Mack Performing Arts Collective, Inc.), an event at Texas Southern University in Houston where young talent received an opportunity to learn from the masters of the acting craft, like workshop host Robinson from “The Steve Harvey Show” and BET’s “The Game.”

Anyone who has ever attempted acting knows that the key to a successful performance is embracing the moment and getting away from you.  Thespians just have to be and become the character, being oblivious to the “real life” around them.

Many communities in America can boast of true artistic talent, but many talented youngsters do not have the resources to train at some of the best institutions for young talent.

Therefore, events like Black MPAC are crucial to the development of young, up-tapped urban talent who only need that one break that can change their life forever.

Another barrier to finding success in the entertainment industry is obtaining the right representation to further one’s career.

“Finding the right agent is always gonna be a challenge,” Robinson told Regal Magazine.  “I’m still looking for the right agent, but I would strongly suggest doing theater and inviting agents out to see your work.”

Robinson added that because of the changing media landscape, one does not necessarily need an agent to strike a deal if they have the right lawyer and manager.

Black MPAC consisted of three events, an acting workshop, a panel discussion on the state of the entertainment business and a private cocktail party, which featured the likes of Miles, gospel legend Kim Burrell and acting great Charnele Brown of “A Different World” fame.

“What we currently have is the business panel discussion,” said Mack.  “It covers television and film and (the) legal side, so we provide various experts from the industry…[and] that’s the opportunity for parents and students in the industry to ask any type of question, whether it’s legal or business, related to the industry.”

During the workshop, Robinson taught an improvisational/cold-reading technique, which enabled participants to learn how to live a scene fully.  Character development, audition techniques, industry knowledge of scene study also were taught at the workshop.

Black MPAC was a sure reminder that many in the arts have not forgotten the difficult road they traveled to success.

And reaching back to help the next generation of entertainers is their way of making sure that the road is much smoother for others to follow.