Kevin Hart Turns Up in ‘Let Me Explain’ 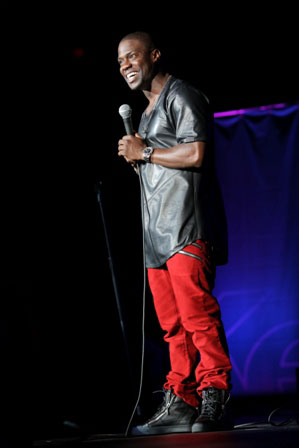 Kevin Hart has officially arrived.  From small comedy clubs to 30,000 fans at Madison Square Garden, the diminutive comic’s rise to the top is enough to bring tears to the eyes of the Philadelphia native.

And why not?  After many cried in sympathy for the young actor after being “punished” with the starring role in “Soul Plane,” few would have believed that Hart could become the funniest man in America.  There were times I had to convince people to watch his comedy specials because they were so turned off by “Soul Plane.”

Nevertheless, with success comes the criticism that no celebrity can avoid.  From rumors that he hates his ex-wife; to rumors that he does not keep in touch with his father; to rumors that he no longer likes dark-skinned women, Hart felt the need to give his side of the story and the concert film “Let Me Explain” gives him a platform that few have to dispel rumors about themselves.

Hart’s “Let Me Explain” is different than most “recent” urban comedy concert films in that the comedian strays away from hot-button topics such as politics, religion and racial issues.  That fact is why his audience at Madison Square Garden consists of old and young, Black and White and celebrity (like Taraji P. Henson) and civilian.

The comedian has reached such rarefied air that he can have fire at his concert for no reason like he is Jay-Z or Kanye West or something.

“Let Me Explain” is in some ways like the concert version of the instant classic “Think Like a Man” in that Hart goes into depth about his struggles with relationships and how his mistakes have made him a better man.

In “Let Me Explain,” Hart talks about the hard work that he put into cheating and his not-so intelligent friends that made his escapades harder to keep away from his ex-wife and ex-girlfriends.

Although he experienced a divorce, Hart explains to his fans that he is still happy, just much happier than his ex-wife because of the freedom he now enjoys.

The comedian said that he can just go for long walks for no reason and feed pigeons without worrying about if that story is believable.  After all, what woman in their right mind would believe that her man was just out feeding pigeons if he stayed away from home for an extended period of time?

Nevertheless, the single life has its down side, such as not being able to hang out with your boys because they are enjoying cupcake night with their wives and they are getting to lick the bowl.

The jokes in “Let Me Explain” are absolutely hilarious and with his crossover appeal the sky is definitely the limit for Hart.

However, the behind-the-scenes footage that set up the film drag a little bit as “Let Me Explain” should have transitioned to the actual concert much sooner.

Nevertheless, there are humorous scenes from the opening act of the film from the haters at his mix-and-mingle party to the foreign fan that thought “Soul Plane” was Hart’s best work.

The opening segments were a way to show how far the comedian has come and to show his gratitude to his fans.

Fans, however, want to see Hart’s shenanigans and the quicker the audience can get to those antics, the better.

“Let Me Explain” is the first step to placing Hart in the same category as Richard Pryor and Eddie Murphy.  Film supremacy is the only thing left to conquer.  And for someone like Hart who had to fight to get to this point, fans know he will not stop until he conquers all challenges and challengers.