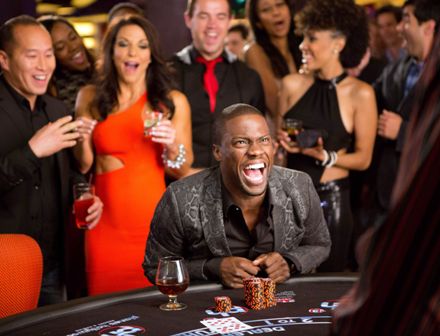 Don’t Get it Twisted

Do not let the silliness on screen or the stage fool you.

Kevin Hart is all business when it comes to his brand and his longevity in Hollywood.

He is not obsessed with the celebrity mentality.  Hart is consumed with the CEO mentality and not allowing movie studios to control his career.

The Philadelphia native has created a brand that extends beyond movies and comedy concerts.  Hart has a social media following of over 36 million fans and that gives him leverage that other stars do not enjoy.

“A studio goes, ‘this guy’s a business as well,’” Hart explained on a recent trip to Houston to promote his upcoming film, “Think Like a Man Too.”  “That’s where my longevity comes in.  You can’t really outdo me because I control what I wanna do…I’m a company.  I’m a CEO.  So, that’s always good when you have a CEO mindset.”

Fortunately or unfortunately, depending on perspective, longevity in one’s career can take even longer to develop and it was no different even for someone as talented as the comedian.

“My journey was a real journey.  I’ve been smacked in the face with reality,” said Hart.

That journey from reality began in 1998 when he launched his career as a stand up comedian.

Hart stated that he would sometimes be paid in food for performing and he can vividly remember driving 12 hours to a gig that only paid $75.

When he finally got the chance to become a “movie star” in 2004 with his starring role in “Soul Plane,” the film bombed at the box office and was eaten alive by movie critics.

Studio executives who once believed in his talents began to doubt his ability to be a box office draw.

In addition, his sitcom “The Big House” was canceled that same year after only six episodes.

It took Hart over five years after the failure of “Soul Plane” and “The Big House” to repair his brand and rebuild his reputation in “Tinsletown.”

Instead of sulking or quitting, he hired an acting coach, learned from past mistakes by studying his old performances and listened and learned from Hollywood veterans.

The end result is that he is currently sitting on the world’s comedy throne, selling out venues across the globe and proving that African American actors and movies can be extremely profitable overseas, which is a barrier that is not given the attention it warrants.

“Studios don’t feel that African American movies translate overseas…We don’t do well overseas because we’re not given the opportunity to fail overseas,” Hart told Regal Magazine.  “I’m not saying that every movie should be promoted internationally.  It’s expensive for a studio.  I get that.  But we can’t have movies that are performing domestically and they’re putting up certain numbers domestically; when you start to break that $100 million number domestically, those numbers translate to all races.  One hundred million dollars is not one race supporting a film in any way, shape or form.”

And why do Hart’s films translate so well to all demographic groups?

“The one thing we all share is laughter,” Hart said, regardless of ethnicity or nationality.

As a result of that philosophy, the comedian has been laughing all the way to the bank since “Think Like a Man” grossed over $90 million at the box office and became an instant classic.

He followed up that success with “About Last Night” and “Ride Along,” which surpassed the $100 million plateau.

With the sequel to “Think Like a Man,” he is looking to surpass the former’s box office success.

Furthermore, he has learned a lot about marriage, relationships and divorce from working on the films based on Steve Harvey’s relationship advice books.

Unfortunately, the actor’s first marriage fell victim to divorce, but he has learned from past mistakes and has been able to incorporate those mistakes and lessons learned into the character Cedric in “Think Like a Man Too” and its predecessor.

“What I learned was the true definition of marriage,” he told Regal.  “Regardless of what problems (my wife and I) went through, as a man I decided to step out and leave.  I made mistakes.  I said, ‘I’m not good in this situation.  I need to go.  You deserve better.  You can do better.  Right now I’m not a good guy for you because I’m all over the place, whether it was infidelity [or something else].’  We got married at 22, so I was not mentally prepared for that…

In “Think Like a Man,” Cedric constantly complained about his wife Gail, but at the end of the movie he wanted her back.

However, he does not want to hook back up with his ex-wife because he realized that they had gone through so much it would be impossible to grow as a person while still being married to her.

“When you have so many cuts, you can only put a Band-Aid on it so many times.  It’s always going to bleed underneath.  And…somebody’s gonna say, ‘how did you get that cut’ and you gotta explain it.  And that was my situation.  I didn’t want to explain anymore cuts so I stepped out,” he explained to Regal.

One thing that he doesn’t have to explain is his enormous success because it is blatantly obvious.

Nevertheless, he is quick to explain that success for him is not just about being famous; it is about owning his content and controlling his brand.

His goal for his Hart Beat Productions is for it to be on the level of major studios in Hollywood.

He wants to mirror the success of Adam Sandler’s Happy Madison Productions and Tyler Perry Studios.

He knows the process to reach that level and he is quickly reaching the pinnacle of entertainment success.

On deck for Hart is a sequel to “Ride Along” with Ice Cube, “Get Hard” starring Will Ferrell and “The Wedding Ringer,” where he stars as Jimmy, the owner of a company that sells best man services to men without friends who are getting married.

What he does not know or understand is how entertainers can labor so hard to reach success and then quit or chill and let their opportunity slip by.

“I don’t understand how people work very hard to be successful and stop,” he stressed.

Unfortunately, that is why they do not enjoy his level of superstardom.