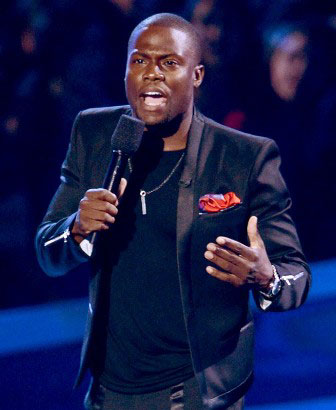 Kevin Hart is on top of the comedy game (Photo courtesy of AceShowbiz.com).

Standing on the Shoulders of Giants

First it was Richard Pryor with his groundbreaking concert film “Live on the Sunset Strip” in 1982.  Then Eddie Murphy got “Raw” in 1987 and took the comedy game to the next level.

Many iconic comics have come and gone since the heyday of stand-ups in the 1980s and 1990s from Chris Tucker to Chris Rock, but Kevin Hart is now Hollywood’s “it-man,” riding a wave of successful television shows and film appearances.

“I’m a student of the game,” Hart said.  “I’m able to do what I do because so many paved the way.  I’m just someone coming up on the totem pole.”

With the July 3 release of the Kevin Hart comedy film “Let Me Explain,” the Philadelphia native firmly places himself on the Mount Rushmore of new urban comedians, which gives him a platform to have his opinions and viewpoints heard.

Hart told Regal Magazine, the title “Let Me Explain” comes from the fact that comedians have a unique opportunity to voice their opinions to the masses.  Throughout his ascension to the top of the comedy mountaintop, Hart has faced more scrutiny from critics to his ex-wife.

The Kevin Hart comedy film gives fans backstage access that one would not see when purchasing a ticket to the live performance, from him hanging out with his friends on the tour bus to him being ignored by women on the streets of London, despite recently declaring himself as a sex symbol on ESPN.

The new Kevin Hart comedy film allows him to explain those situations for himself, but in an amusing way.

Despite his platform to affect the masses, there are several themes or topics that Hart will not address because Kevin Hart comedy is not in the business of offending people, but unifying people.

Hart told Regal Magazine that he is not a politician and doesn’t do politically-partisan jokes.  Furthermore, he stays away from jokes about people’s sexuality because it is often seen as offensive to certain individuals.

The Kevin Hart comedy brand has been so successful that it has led to numerous film roles, including his role as Cedric in the instant classic, “Think Like a Man.”  The cast and crew are currently reunited in Las Vegas filming the sequel, “Think Like a Man Too.”

He describes his experience working on the sequel as being challenging living up to the original, but still very good work.

Although his brand is rapidly expanding, Hart does not see himself branching out to non-comedic roles anytime soon.

However, he is broadening his empire to include producing films.  He told Regal Magazine that he started Hart Beat Productions because as a brand he wants to have multiple things under his belt.

His brand is blessed with worldwide appeal as evident in him selling out the 16,000 seat O2 Arena in London.

When asked if he could ever see this generation of urban comedians like himself, Katt Williams or Mike Epps collaborating on a Kings of Comedy-like tour, he stated that collaboration is not a bad idea if the timing is right, but right now he and other comics are focusing on their personal brand.

That brand is apparently doing well if sold out shows and hit movies and TV shows are any indication.

Ultimately, if things continue going north for Hart, it will not be long before he is considered in the same pantheon as legends like Redd Foxx, Pryor and Murphy.