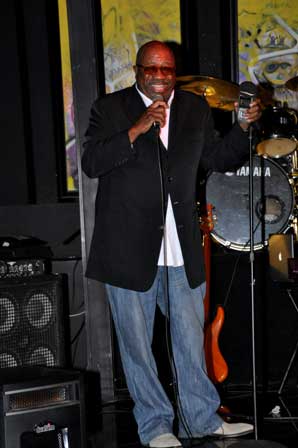 Over 35 years in the comedy game can change your outlook on the entertainment industry.

When one thinks of comedian J. Anthony Brown from the “Tom Joyner Morning Show,” one thinks of the wise cracking guy from Columbia, S.C. and his popular catchphrase, “watch out deh now.”

However, the “real” J. Anthony Brown can be shy, soft-spoken and is very introspective about the comedy industry and how difficult it can be for Black comedians to get their opportunity in this business.

“I guess the sad part is if you’re a Black comic, it’s just that there’s not that much work,” Brown explained to Regal Magazine.  “We just don’t get that much work.”

Because he was one of the blessed to find steady work for over two decades, Brown is using his influence and clout to give up-and-coming comedians the break they deserve by bringing his J. Spot Comedy Club to the Red Cat Jazz Café in Houston every Thursday starting March 6.

Although Black comedians can find success on the club circuit, there are very view opportunities for work on sitcoms or talk shows, in front or behind the camera, with the exception of BET, Tyler Perry shows and TV One.  TV One’s “The Ricky Smiley Show” (which stars Brown) has all Black writers according to the comedian.

“When I wrote on ‘Arsenio’ we had two shows.  You have to understand right now, we have Jay Leno [now Jimmy Fallon], we have the David Letterman show, you have Seth (Meyers), ‘Chelsea Lately,’ and you have Arsenio Hall.  And maybe two percent of the people that work on the shows are Black.

Houstonian Derrick Ellis is a comic that Brown is excited to see get a break and grow along with his daughter, Mahoganie Brown, even though Brown admitted she takes his advice and does the opposite.

Despite the advice, Mahoganie Brown, 39, does feel some pressure following in the footsteps of her famous father.

“The pressure does come when people expect you to have what your father has.  They have to realize that you’re an individual and you have a family, (so) you have to go out and get it just like he did,” said the comedienne and author of the upcoming self-published book “Just Joking When Laughter Wasn’t an Option.”

The veteran comedian who was influenced by legends like Richard Pryor, Bill Cosby and Redd Foxx, however, believes that young comics are at an advantage because of the enormous amount of comedy clubs that are available, which did not exist when he started his career.

Brown even has plans to build more brick and mortar comedy clubs like his J. Spot Comedy Club in Los Angeles.

Although the road is tougher for Black comedians, he encourages all comedians to persevere and one day Hollywood will fully recognize the acting and writing talents of comedians who aspire to be the next great Black comedian.

Nevertheless, success on the comedy circuit means being able to adapt to all audiences, a luxury that White comedians do not have to adhere to because of the abundance of White-owned clubs.

Nonetheless, White club owners reap the benefits because Black comedians like Sommore, D.L. Hughley and Bruce Bruce are often the most popular artists.

“They won’t admit it, but Black comics save these White clubs,” Brown said.

Regardless, no one can refuse to admit or recognize the enormous talents of the latest entry onto the Mount Rushmore of Black comedians, Kevin Hart.

“Ride Along” has surpassed $100 million at the box office, and “About Last Night” came in second place in its opening weekend.  If Hollywood cannot book Hart, they could possibly look for another Black comic who is Hart-like.

Nevertheless, it is about opportunity.  Brown was able to get his opportunity through “Def Comedy Jam,” a daily gig at an Atlanta comedy club and ultimately before eight million listeners every morning via the “Tom Joyner Morning Show.”

His comedy special every week in Houston is just another opportunity for young comics to shine.

Unfortunately, fans will not get to see him shine or reprise his role in the sequel to “Think Like a Man” because they “killed” off his character, but fans should rule nothing out when it comes to his career because it could include writing screenplays or sitcoms in the future.

He has done it all over the last 35 years, so nothing seems impossible for the next 35 years.