From Houston to Hollywood: Nephew Tommy Living the Dream 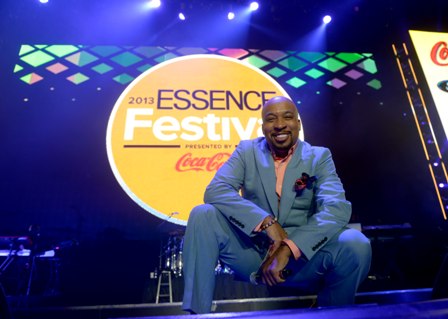 Thomas “Nephew Tommy” Miles has become a mainstay as the host of the annual Essence Festival in New Orleans (Photo Credit: Matthew Hinton/Invision for Essence/AP Images).

The lyrics of “The Impossible Dream” say, “To dream…the impossible dream, to fight the unbeatable foe, to bear…with unbearable sorrow, to run…where the brave not dare go…To try…when your arms are too weary, To reach…the unreachable star…”

Thomas “Nephew Tommy” Miles has reached the so-called unreachable star in Hollywood, and his career has proven that no dream is impossible.

That classic song written and composed by Joe Darion and Mitch Leigh for the 1965 Broadway musical “Man of La Mancha” has been covered by everyone from Frank Sinatra to The Temptations to Luther Vandross, and it epitomizes Miles’ meteoric rise to the top of the entertainment industry.

The dream might have seemed impossible when Nephew Tommy enrolled in the theater department at Texas A&M University in 1985.

That campus in College Station, Texas had a turbulent racial history, and because of the status quo it was hard for African American talent to land the leading roles in the top productions.

“While being at Texas A&M trying to get a leading role was almost impossible because (there were) not a lot of Blacks in the actual theater department, so it was really a tug of war trying to get the best role and the leading role in a play,” Miles said.

That tug of war battle became a little more balanced during Miles’ sophomore year when the theater department hired his mentor, the late playwright Charles Gordone.

Gordone, who in 1970 became the first Black playwright to win a Pulitzer Prize for “No Place to be Somebody,” championed the cross-cultural casting movement at Texas A&M University, which meant that race was a non-factor in casting roles for family members, etc.  A Black father could have an Asian son and vice versa.

Because of Gordone’s influence, Miles was able to showcase his immense talent to a wider audience.

Upon graduating from college, Nephew Tommy showcased his talents as a thespian working on over a dozen stage plays, such as “He Say…She Say…But What Does God Say,” independent films like “Fifth Ward” and studied with the famed Royal Shakespeare Company in London.

Despite steady work in the entertainment industry, the road to mainstream recognition and celebrity may have seemed like an impossible dream until another legend entered into his life.

While performing in stage plays, the lighting technician on one of his plays was connected with the producer of Vandross’ music tour, and when Vandross’ opening act had to miss an entire week, the producer inquired about Miles’ skills as a stand up comedian.

He was offered the job as Vandross’ opening act for one week, but after a week of performances the legendary R&B singer’s road manager offered Miles the job permanently.

The gig lasted for three years, and took Miles everywhere from the States to Europe, allowing him to learn firsthand from one of the greatest entertainers of our time on a daily basis.

“The greatest advice was watching Luther,” explained Miles.  “Luther was a perfectionist and Luther always wanted to make sure things were picture perfect and right.

Now, that attention to detail and desire for perfection has allowed him to give over eight million radio listeners what they want, which is his zany brand of comedy every morning as the co-host of the nationally syndicated “Steve Harvey Morning Show.”

For some, working with Steve Harvey would be the dream realized, but for Nephew Tommy it is only the beginning.

Harvey encourages all comedians, including his nephew, to stay in the gym, which is the comedy stage, in order to constantly work out those muscles called talent.

And Miles’ hustle keeps him on stages from the casinos of Mississippi to the main stage at the Mercedes Benz Superdome in New Orleans as the host of the Essence Festival.

Because of such a large platform, he is able to display his talents to producers, actors and filmmakers who listen to the radio show on a daily basis.

“We play the role so well to where a lot of people didn’t even know that Thomas was a theater guy, an actor by trade,” Miles explained.  “I’m just so good at acting stupid they really think that’s what the hell I do.”

What he has done is parlayed the perfect platform into an international fan base, which now includes mainstream films like “Think Like a Man” and “Baggage Claim.”

Soon, he will begin filming the movie “You Play Too Much,” based off of his hilarious radio prank calls in his hometown, Houston, which will surely delight his fans.

“Nephew Tommy’s prank calls (are) spleen busters,” said fan Kristy Lucas.  “Compiling his prank calls into a movie would be phenomenal and funnier than listening to them via radio.  As a viewer, I would like to see the facial expressions and physical reactions of his victims.”

He is also pitching a sitcom to Kevin Hart’s Hart Beat Productions, and is currently hosting a comedy show in San Francisco entitled “Uncontrolled Comedy,” which allows him to showcase his sketch comedy characters Oatmeal and Eugene.

Furthermore, he is hosting “Black College Quiz Show,” a game show on Bounce and Aspire that tests students from HBCUs on Black history, awarding scholarships to winners.

What is even more phenomenal is how Miles has used his celebrity to give back to those less fortunate like wounded military veterans.

He started the foundation Miles of Giving after his first USO Tour in the Middle East and fell in love with the bravery and sacrifice of American soldiers.

The foundation provides financial assistance to wounded warriors and their families, which they can spend at their discretion.

Additionally, Miles along with Harvey and radio co-hosts Shirley Strawberry and Carla Ferrell recently broadcasted their popular show from Orlando, Fla. at the Disney Dreamers Academy.

The Dreamers Academy is a four-day event where 100 children are chosen via an essay contest to be mentored by celebrities, doctors, lawyers, pilots and other professionals on how to fulfill their dreams.

Disney Dreamers Academy allows children from various backgrounds to see that there is an entire world out there that is bigger than their neighborhood or surroundings, and that they can achieve anything that they dream of.

“Education is not the most important thing in your life: It’s your dream,” said Harvey.  “I tell parents all the time just talk to your children at least once a month to find out what they want and dream about because it changes all the time.  Their dreams propel them to get an education.”

However for Miles, his dream has been the same since the fourth grade when he would perfect his celebrity imitations with his father, Thomas Miles, Sr.

As a result, he began chasing that so-called impossible dream as a youngster and he is currently enjoying the fruits of his labor.  In the process, he has proven to all of those that no dream is actually impossible.

Miles’ career has embodied the lyrics, “That one man, scorned and covered with scars, still strove, with his last ounce of courage, to reach…the unreachable star.”

His comedy career has endured some good nights and bad nights, but because he kept pushing when he got weary, he has now reached Hollywood’s elusive star.