Commercial Star J.T. Jackson Next in Line for Comedy Throne 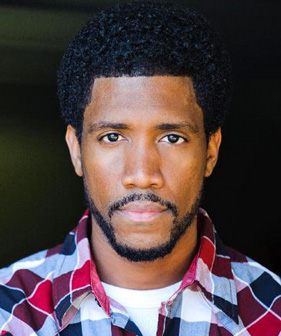 The Ohio State Buckeyes kept trucking throughout the 2014 season despite the hiccups and obstacles.

When quarterback Braxton Miller fell victim to a season-ending injury during the offseason, J.T. Barrett took the reins of the football team and guided them to the Big 10 championship game.

And when the injury bug bit Barrett, third string quarterback Cardale Jones carried the team all the way to the national title.  In essence, the team virtually had a next man up mentality.

The Buckeyes can be considered a microcosm for Hollywood.

Stars come and go in Hollywood.  One minute a star is as bright as the sun, but as time passes that star’s light dims into the night, and the next day a new star rises.

In the entertainment business, fans and producers are constantly looking for the next big comedic star or the next man up.

However, one only has to look at their television to see a new star blazing across the scene.

His name is J.T. “Action” Jackson, a budding star seen in countless commercials who is ready to take his talents to bigger stages and bigger platforms.

“To be like the Redd Foxxes and Chris Tuckers and all that, I really feel that I will be there, [but] the only way I’ma get there is by doing my own thing,” the 37-year-old University City, Mo. native said.  “I’m not gonna get it through Hollywood, because they’re not writing the stuff for me to make it in that light.”

Nevertheless, Jackson has made a name for himself on the comedy circuit and in the world of commercials, working as the spokesperson for companies like Bacardi, Dos Equis and Kingsford grills.

And now Jackson is taking his talents to movies and television with appearances in “CSI: Crime Scene Investigation” and “Think Like a Man Too.”  But regardless of the role, he wants to stay true to his comedy roots.

“I always wanted to be the comic relief of the movie,” Jackson explained.  “Whether it’s a drama…regardless I want to make people laugh.  Granted, right now my bread and butter is commercials and it’s getting me by just to get to my goal, which is to be that star in that movie where I’m the comic relief.”

Anyone who knows Jackson knows it will not be long before he reaches his ultimate goal because he has a proven track record in Hollywood of accomplishing his goals.

Growing up in the St. Louis area, Jackson was always seen as the funny guy in his neighborhood, school and at local parties.

Friends encouraged him to give stand up comedy a shot and he began taking acting classes at 16 years old.

After a chance meeting, a Los Angeles resident encouraged him to move to Los Angeles or New York if he was serious about acting because there were virtually no television studios in Missouri.

Confident in his talent and inspired by the success of hometown hero Cedric the Entertainer, Jackson “sacrificed himself” by joining the United States Navy at 18 years old.

He strategically got stationed in California so he could see for himself if acting was really something he wanted to do for a living.

Jackson’s plan included doing stand up comedy just to get in front of the right people and it worked immediately.

The comedian met his agent after his first gig and began getting gigs almost instantly.

His first big break came in 2003 when he became the spokesperson for Bacardi.

It was at the time that he booked the Bacardi deal that Jackson met friend and current comedy giant Kevin Hart.

From the beginning they clicked and formed a crew of talented performers that includes stars like Corey Holcomb (“The Wedding Ringer”).

Hart, who experienced his bumps and hiccups on the road to success, made a vow with his crew that whoever made it first in Hollywood would open the door for the whole crew to get into the building.

The thought process behind the pact was that at sometime all of them will be washed up in Hollywood, but if they opened doors for their friends, then they would always have work in this business.

They formed an alliance that mirrors Adam Sandler’s Happy Madison Productions in which all of their films would feature the same stars so everyone could eat regularly.

It’s an alliance that has paid off for Jackson, as Hart has been able to set up meetings with key Hollywood players to discuss Jackson’s upcoming television and film productions.

While many up-and-coming Black stars may have to fight racism to get in the door, his friendship with Hart allows him to meet all of the right people in the business, which is a necessity to make it in Hollywood.

Actually, it was with Hart and Holcomb that “Action Jackson” was born.

After a gig at The Laugh Factory in Los Angeles in 2003, the group of comedians hung out at a bowling alley.

Although a novice to the game, Jackson picked up on the sport immediately.  He threw the ball so hard; he got a lot of pin action because the pins would go crazy.

Furthermore, he was fond of another form of action, gambling, therefore the name J.T. “Action” Jackson stuck.

Soon, he will get even more action in Hollywood as he has many industry insiders interested in the projects created by him and his writing partner.

Although he goes on a lot of auditions, the characters that they are producing for Black actors are not authentic to whom he is and how he wants to be portrayed; therefore he is creating those roles for himself.

And with so many more avenues to get his content out like Netflix, Amazon and Crackle, it is only a matter of time until Hollywood has another Jackson to add to the Walk of Fame.

Hart’s advice to Jackson: “Don’t ever give up if you’re talented,” Jackson said.  “You’re gonna go through ups and downs [just] stick with it.”

That advice was probably the mantra of the Ohio State quarterbacks in 2014 also.

They had so much talent on their roster that it became easy to be overlooked.

But eventually, Miller, Barrett and Jones all got their time to shine.  Hollywood can be the exact same way.  There’s so much talent out there it is easy to get overlooked, but very soon Jackson will have his time in the limelight like all of his predecessors.