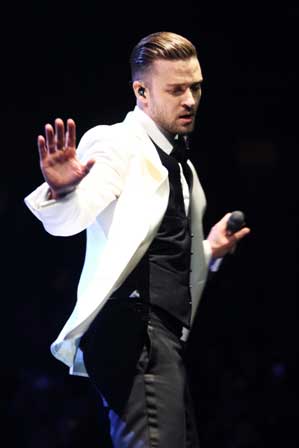 Critics have ridiculed the NAACP for nominating White musicians like Justin Timberlake for awards that were once exclusively for Black artists (Photo Credit: Robb D. Cohen/Invision/AP).

Unlike the Golden Globes or Grammys whose golden statues are doled out to outstanding performers of the year, the NAACP Image Awards are designed for a higher plateau of artistic excellence.

The NAACP Image Awards’ litmus test for nominees are “…people of color in the arts, as well as those individuals or groups who promote social justice through their creative endeavors,” according to its website. And over time, the civil rights organization has expanded its recognition to include a more diverse set of entertainers (i.e. Indian actress Archie Panjabi of “The Good Wife” and Puerto Rican and Filipino musician Bruno Mars) to match those needs.

But this year’s two nominees—Justin Timberlake, who is up for three awards for “The 20/20 Experience,” and Robin Thicke, who has four nods for “Blurred Lines”—have sparked a controversy that has viewers questioning the exclusivity of what the NAACP Image Awards are built on.

“All the (artists the NAACP committee) could have chosen, you choose Robin Thicke; he has done nothing in alignment of what the NAACP has stood for,” said Morris W. O’Kelly, author of Huffington Post’s blog article, “Either Robin Thicke is Unworthy of an NAACP Image Award or the Awards are Unworthy of our Support.”

“The nominating body didn’t conceive it as controversial, just [wanted] a singer of a No. 1 song on the award show.”

Not unlike other award shows whose modus operandi is to reel in popular talent and feast on high ratings numbers (a prospect the NAACP is potentially banking on considering this year’s NAACP Image Awards will be aired on cable network’s TV One, rather than a primetime network).

It’s a strategy O’Kelly, Los Angeles based satellite radio host of “The Mo Kelly Show” is not unfamiliar with having worked for award programs in the past.

Yet, what baffles him about the selection of Thicke goes beyond the obvious skin color conflict and zeroes in on the artist’s catchy-but-contentious “Blurred Lines” tune, which he believes is laced with derogatory, sexually violent lyrics toward women that isn’t worthy of a nomination at the NAACP Image Awards.

“Honoring this song on this particular award show sends the wrong message for past and future nominees,” O’Kelly told Regal. “What is actually beyond the pale? It opens the door for anyone (to be nominated).”

And some feel that door has already been widened with NAACP Image Awards 2011 nominations that included rappers Jay-Z and Nicki Minaj.

A survey conducted by Your Black World website at the time found that 83 percent out of 335 participants felt the NAACP organization wasn’t upholding its positive Black legacy by highlighting Minaj and Jay-Z, who used the N-word and derogatory lyrics against women at the awards.

And 83 percent of respondents also believed their NAACP Image Award nominations were “a contradiction to the message and image of the NAACP.”

Stacia L. Brown, who penned Salon’s “The Golden Globes Race Problem: Why Award Shows Matter,” offered Regal another example of how the NAACP nominating committee straddles the line between celebrating positive portrayals of Black culture through art and maintaining its relevance by honoring popular and possibly controversial performers.

“If I’m not mistaken, R. Kelly has been nominated for (a) NAACP Image Award. I don’t understand why they would consider rewarding R. Kelly’s image,” questioned Brown, hinting at the popular R&B artist’s accusations of sexual assault on underage girls.

“Clearly, ‘Blurred Lines’ isn’t a song that should be celebrated for its lyrical content, but I can understand why it was; it was the song of the summer despite the controversy of Marvin Gaye’s family [suing Thicke for copyright infringement claiming ‘Blurred Lines’ has similarities to Gaye’s ‘Got to Give it Up,’], and Black radio and listeners made it the song of the summer,” said the Maryland resident.

“I don’t know what (the) NAACP is thinking when it nominates artists whose work is controversial (or even damaging) for Black audiences. We viewers have to think about what we expect from them.”

Viewer expectations for this year’s NAACP Image Awards nominees were more artists of color and less recognition of Thicke and Timberlake.

“Justin and Robin are great artists but they are both White. The NAACP was created for people of color,” declared Danielle Jones of Brooklyn, N.Y. “There’s nothing wrong with acknowledging talent, but because Black people (have) such a huge problem with uniting as a community at some point we need to start practicing exclusivity.

“You don’t hear about the Jewish community letting others in their club just to be nice. We can take that lesson from them. They understand as a whole the importance of having some things be exclusive to their people and their people alone, like many other communities do.”

It’s a lesson the Black community has rallied against when artists of color are locked out of mainstream award shows, and stands as the foundation for NAACP’s incarnation of the Image Awards, so is advocating the exclusion of White performers at Black award shows two sides of the same coin?

According to Edward Bowser, editor of the Soul in Stereo blog, it is.

“So we cry racism when our favorite Black folks don’t win Golden Globes and whatnot but we also don’t want White folks getting nominated for our awards,” he wrote in his “Let Justin Timberlake and Robin Thicke Live: NAACP Image Awards Aren’t Just for Black Folks” blog post.

The Birmingham, Ala.-based journalist continued by posing this question: “But when we expect the Image Awards—our awards—to exclude talented White artists in favor of Black folk aren’t we doing the SAME THING we accuse those biased selection committees of doing years ago?”

Charing Ball of Madame Noire countered Bowser with her article, “Why are Justin Timberlake and Robin Thicke Nominated for Image Awards?”

She cited the impact White musical artists conquering the Billboard Hot 100 charts in 2013—for the first time no Black artist scored a No. 1 single on the charts this past year—has had on genres that would ordinarily be segregated.

“And just because a White person can rap and perform in R&B, soul and other art forms created by and largely associated with Black folks, does not necessarily make them a friend to the people or the cause,” Ball wrote.

However, if White artists are willing to contribute a valuable piece of fabric to Black culture’s tapestry, why should that go unrecognized, questioned O’Kelly.

“Justin Timberlake and Robin Thicke are two White boys singing Black music. But if you say NAACP (Image Awards are) only for Black people, (then) we shouldn’t recognize Steven Spielberg for ‘The Color Purple’ or George Lucas for ‘Red Tails,’ which feature positive Black imagery,” said O’Kelly, who approves of Timberlake’s NAACP Image Award nomination because of the R&B singer’s public acknowledgment of Michael Jackson and his support of Trayvon Martin’s family.

“I mean, I guess some organizations start with a certain purpose in mind but deviate away from that purpose,” said Placide. “Maybe the NAACP will lean more towards diversity and start to include people of all backgrounds.

“Like if I did something for Asian culture there is no reason I shouldn’t be nominated based on my actions and not my skin color. R&B was pioneered by African Americans, but that is the genre that Robin Thicke is part of. In the same sense, country music was pioneered by Caucasians but the country music awards still include Darius Rucker in their nominations.”

The jury is still out on why the NAACP Image Awards included Thicke and Timberlake. A spokesperson for the organization was not available for comment on this article.

The NAACP nominating committee is made up of 300 members within a variety of roles in the entertainment industry as well as NAACP board and staff members. The committee evaluates five criteria for member nominee votes: inclusive representations of a broad spectrum of people of color; subject matter that is original; the impact the project has on society; the cultural responsibility of the work as it aligns with NAACP Image Awards’ civic purpose and finally the overall quality of its message. The nominated projects in the top five are voted on by NAACP membership and the nominee garnering the most votes is the winner.

Whether it’s a win or loss for Thicke and Timberlake, Brown believes they have a right to be there.

“I don’t really believe in excluding in Black awards. I don’t believe White people shouldn’t be nominated for them, unless their work is unworthy. Image Awards are supposed to be for any work that contributes to the positive representation of people of color. HBCUs (Historically Black Colleges and Universities) admit a certain number of White people who apply, because it’s still discrimination if you’re saying, ‘you’re not eligible because of your skin color.’”