Regal’s Favorite Ladies From the 1980s 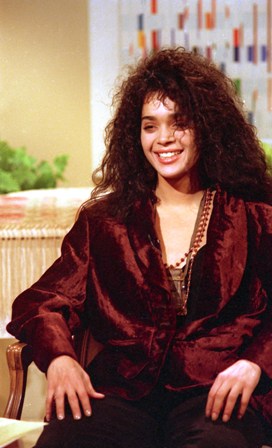 Ladies from the 80s

Admit it, if you were a teenager in the late 1980s your man-card would have probably been revoked if you did not have a poster of R&B singer Pebbles on your bedroom wall.

Or if you were coming of age in the early 1980s, you vividly remember the debate of who was finer, Vanity or Apollonia.

The ladies from the 1980s were no more or less beautiful than the women of any other decade, but for those growing up in that decade; they were our Marilyn Monroe and Dorothy Dandridge.

They say hindsight is 20/20, but perfect vision is definitely not required to recognize the beauty in our 10 ladies from the 80s.

10) Holly Robinson—For years, Holly Robinson Peete has epitomized what one should do with fame.  She has used her celebrity to advocate for children with autism, using her family’s own testimony as an inspiration for others.

Although she has consistently turned out great performances like her portrayal of Diana Ross in “The Jacksons: An American Dream,” it was her role as Officer Judy Hoffs on the television show “21 Jump Street” that jump started her career and started crushes for many young boys.

Robinson Peete would go on to find success in the sitcom “Hangin’ with Mr. Cooper,” and even reprised her role in the film adaptation of “21 Jump Street.”

9) Sheila E—All of Prince’s female protégés in the 1980s were drop-dead gorgeous, and all of them were ridiculously talented.  Arguably, none were more talented than percussionist and vocalist Sheila Escovedo.

Born into a musical family, Sheila E. rose to fame performing with musicians like Lionel Ritchie and later, Prince.

However, she proved to be talented enough to fly solo, releasing hits like “The Glamorous Life” in 1984 and “A Love Bizarre” in 1985.

Although she struggled to create hit records after her collaboration with Prince ended, she and her family, The E Family, still record and tour to this day.

8) Apollonia—No man can watch the film “Purple Rain” and not remember the scene where Apollonia had to purify herself in the waters of Lake Minnetonka.

That classic scene was definitely sexy, but Apollonia was more than just a sex object.

After Vanity left Vanity 6, Prince desperately needed a replacement for “Purple Rain” and Apollonia was hired as the next lead singer of the group and as the film’s co-star.

Although Apollonia 6 only released one self-titled album in 1984 with one hit, (“Sex Shooter”), their lead singer used that success to land roles on “Falcon Crest” and several films throughout the 1980s.

7) Whitney Houston—Whitney Elizabeth Houston had it all, beauty, grace and like Oprah Winfrey would say, the voice.  The daughter of gospel legend Cissy Houston burst onto the music season with her self-titled debut in 1985.  And the hits did not stop until she went on to glory.

The Newark, N.J. native got her start as a fashion model.  To anyone old enough to remember her in her heyday, she definitely had the goods to make it as a successful model.  And although we did not know it at the time, Houston had acting chops as well.  She was considered for the role of Sondra Huxtable on “The Cosby Show” before Bill Cosby gave the role to Sabrina La Beauf.

Nevertheless, Houston would go on to find enormous success as an actress in the 1990s, and will go down in music history as having one of the best voices of all time.

6) Jasmine Guy—Jasmine Guy is an accomplished thespian in every sense of the word, but to her fans from the late 1980s and early 1990s, she will always be Whitley Gilbert from “A Different World.”

That Southern drawl was a thing of perfection, and her romance with Dwayne Wayne (Kadeem Hardison) was probably one of the most popular relationships in Black television history.

Guy began her career with the Alvin Ailey American Dance Theater in New York and starred on Broadway in productions like “Beehive” and “Leader of the Pack.”

She went on to famously star in the film “Harlem Nights” with Eddie Murphy and on television in “The Vampire Diaries,” but she will always be Ms. Thang (as Patti LaBelle referred to her) from Hillman College in “A Different World.”

5) Lisa Lisa—In the 1980s, men loved singer Lisa Lisa from “Head to Toe” and many wished she would take them home.  Thanks to Full Force and her band Cult Jam, Lisa Velez became an overnight sensation as a teenager thanks to songs like “I Wonder If I Take You Home” and “All Cried Out.”

Young girls wanted to look like her and men fell in love with her.  She was arguably the first true Latina R&B star, and she had the beauty, body and boldness to take the game to another level combining the freestyle phenomenon with soul and pop music.

Lisa Lisa was the originator.  There would be no Gloria Estefan, Jennifer Lopez or Selena Gomez without the contributions of this Manhattan, N.Y. native.

4) Lisa Bonet—Physical beauty usually comes a dime a dozen, but what truly makes one beautiful is uniqueness and talent.

Actress Lisa Bonet embodied uniqueness and talent during the 1980s, thanks to her role as Denise on “The Cosby Show” and its spinoff “A Different World.”

Although she played a good girl as Denise Huxtable, there was something eclectic and mysterious about her vibe and it made men desire her even more.  She reportedly was hard to work with on “The Cosby Show,” but Bill Cosby thought so highly of her that he created “A Different World” for her.

Nevertheless, Bonet was not only eclectic, but also eccentric.  At the height of her popularity, she disappeared from the limelight to focus on family.  The talented actress was basically the first Lauryn Hill, and her fans have been eagerly anticipating a comeback since she exited stage left prematurely.

3) Phylicia Rashad—Elegance, intelligence and grace are all adjectives that accurately describe actress, and Houston native Phylicia Rashad.  The daughter of a dentist father and poet mother, Rashad and her sister Debbie Allen obviously took after their artist mother.

Although she had become an accomplished actor by the 1970s thanks to roles in productions like “The Wiz,” it was not until 1984 and her role as Claire Huxtable on “The Cosby Show” that Rashad reached pop icon status.

In the neighborhood, she would have been the beautiful mother that all the young boys had a crush on.

However, her beauty was much more than skin deep and her role as Claire showed that professional Black women were the norm for many families of color.  Her role was transcendent, and many people believe that seeing a successful Black family on TV for eight seasons, made Americans feel comfortable with seeing a Black family in the White House for eight years.

2) Vanity—Denise “Vanity” Matthews represents the epitome of womanhood.  The former model, actress and singer epitomizes strong femininity not because of her outward beauty, but because of the strength it took for her to correct past mistakes like drug use and walk away from fame to follow Jesus Christ.

The former Prince protégé, known for hit songs like “Nasty Girl” with her group Vanity 6 and movies like “The Last Dragon” was often criticized for not having much talent, only a pretty face.  She actually delivered good and underappreciated performances in films like “Action Jackson” with Carl Weathers and “52 Pick-Up.”

However, the Niagara Falls, Canada native proved there was much substance behind her style, becoming an evangelist in the 1990s.

1) Pebbles—Although steeped in controversy recently because of the unflattering portrayal of her in the TLC biopic “CrazySexyCool,” Perri “Pebbles” Reid is another woman to epitomize the strength of a beautiful woman.

In the late 1980s, she was the alluring songstress behind Platinum and Gold hits like “Mercedes Boy,” and “Girlfriend.”

However, like Vanity she was more than just a pretty face without substance.  After marrying music executive Antonio “L.A.” Reid (now divorced) she began discovering acts for her Pebbitone imprint like pop sensations TLC.

After leaving the secular music business, Pebbles became a Christian minister under the moniker Sister Perri, releasing a gospel album, “Prophetic Flows Vol. I &II”  after a 13 year recording hiatus in 2008.