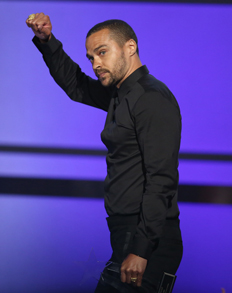 Some of Webster’s definitions of black include the adjectives dirty, evil and sad.

However, that definition should instead include strong, defiant, valiant and outspoken.

Hollywood has a history of blacklisting its talent.

With the recent efforts of some “Grey’s Anatomy” fans to get actor Jesse Williams fired from the show for his powerful speech at the 2016 BET Awards, RegalMag.com thought it was time to redefine the blacklist into something positive.

The blacklist is something every entertainer, especially entertainers of color, should aspire to belong to.

It is simply a list of entertainers who use their platform to improve the lives of African-Americans and other oppressed minorities in this country.

Without further adieu, RegalMag.com honors the five inductees into this distinguished group of Hollywood renegades.

David Banner—The Mississippi born rapper/actor has been an activist since his days as Student Government Association president at Southern University.  He has used his fame to educate the community via the college lecture circuit and on cable news television.  The entertainer born Lavell Crump has received the Visionary Award from the National Black Caucus after his work in the aftermath of Hurricane Katrina.  And he has appeared before Congress on hearings about racism and misogyny in hip-hop.

Darrin Dewitt Henson—Known for his role on the television adaptation of “Soul Food,” this actor has no problem voicing the concerns of underprivileged communities and giving back.  In the past, he has helped raise funds for the Charles H. Wright Museum in Detroit and also joined forces to raise funds for the M.A. Lee Scholarship Fund Gala.  Henson is also dedicated to using his talents to open more doors for African-Americans in Hollywood with successful independent film projects like “Black Coffee.”

Matt McGorry—It might be safe and easy for White entertainers to stay out of Black issues and politics, but this “How to Get Away with Murder” and “Orange is the New Black” star has used his platform to educate his fan base on issues that they might be unaware of from police brutality to other issues like the feminist movement.  In 2015, McGorry wrote an essay for Cosmopolitan magazine on what it means to be a feminist.

Common—Common’s discography and filmography is a testament to using one’s talent to fulfill one’s calling in life.  His music has always uplifted his people with songs like the Academy Award-winning “Glory.”  His movies have sought to decrease gang violence like in “Barbershop: The Next Cut” and to educate the masses on Black history like “Selma.”  The Chicago-raised entertainer protested the death of Michael Brown in Ferguson, Mo. and pressed for criminal justice reforms in New York after the death of Eric Garner.

Jesse Williams—It is extremely appropriate that Williams will play actor/singer/activist Harry Belafonte in a biopic because he is this generation’s version of Belafonte.  His speech at this year’s BET Awards about inequality and police brutality will go down in history.  He is a board member of the Advancement Project, which inspires and supports national and local movements toward democracy.  The “Grey’s Anatomy” star is also on the board of directors of Sankofa, a social justice organization founded by Belafonte.