Yearning for ’90s Musical Renaissance: Who Should Make Comeback? 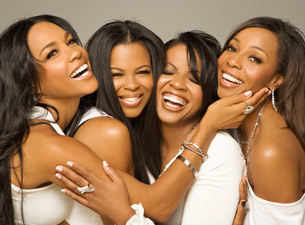 10 Musicians That Should Make a Comeback in 2012

It’s a question we’ve all asked ourselves when an old jam comes through the air waves, or a vintage CD from a long forgotten artist reappears like a relic from a time capsule; whatever happened to that singer or group?

Lauryn Hill was a part of what some R&B and hip-hop fans described as a musical renaissance—with her famous album The Miseducation of Lauryn Hill—an influx of R&B groups, rappers and solo artists producing a variety of hit albums in the ‘90s.

After sporadically performing at music festivals these past several years, Hill made a surprise appearance with The Roots in Philadelphia on July 4. Boyz II Men and SWV have also reemerged from the shadows and onto the stage, picking up where they left off. However, there are still so many artists from the ‘90s musical renaissance unaccounted for, which begs the question, who is the next artist to make a comeback? Here are 10 performers who we think should:

Before there was Robin Thicke, we had Jon B., a silky tenor voice that echoed from his hometown of Pasadena, Calif. to our radios with “Someone to Love,” the Grammy-nominated duet with Babyface.

Three major hits on his sophomore album, Cool Relax including the beloved ballad “They Don’t Know,” sealed his fate as a successful R&B singer.

Last year, Jon B. independently produced his seventh album Comfortable Swagg, but hasn’t received the exposure he once had in the ‘90s, but keeps fans satisfied with tours around the country.

This quartet embodied the spirit of the ‘90s girl group, while channeling the legendary group, The Supremes.

En Vogue broke new ground with their music’s themes, leading the pack of the musical renaissance.

The Oakland-based group performed songs that were sophisticated and sexy such as “My Lovin’ (You’re Never Gonna Get it),” which was No. 1 on the Billboard charts for 17 weeks. It’s not surprising En Vogue was the most sought after girl group at that time. What is shocking is the group’s tepid album sales post-1990s; plagued by group member reshuffling and changing record labels.

However, the foursome have been touring around the country and announced their seventh album is in the works (keep your fingers crossed).

Hehehehe haw hehehe haw is a sound I never thought I’d hear come across my lips, but out of the mouths of innovators come followers (Yeah, I still don’t know what it means). And Missy Elliott is a true original with her hard-to-replicate dance moves, energetic beats and catchy rap verses. It’s no wonder she’s the sole female rapper to have six albums certified platinum and one album certified double platinum.

The Virginia-bred rapper, singer and record producer got her start in a childhood singing group, under the guidance of Jodeci member Devante Swing, as she parlayed her singing, songwriting and rapping skills into being a mega producer and performer.

Elliott continues to produce artists, but has yet to release her highly anticipated seventh album Block Party. But her spark of originality is what set the ‘90s musical renaissance ablaze and we are waiting with baited breath for it to reignite.

Lately, I’ve had the strangest feeling…that this groundbreaking quartet won’t make a comeback. The original bad boys of R&B have been missing in action since 1998. Jo Jo, Devante Swing, K-Ci and Mr. Dalvin shattered the model of the buttoned up, mild-mannered male crooners of the ‘90s musical renaissance, by sporting doo-rags, Timberland boots and tattoos.

Their rough edges captured ladies’ hearts and attention with ballads that made any female melt such as “Forever My Lady” and “Come & Talk to Me.”

The foursome—made up of two groups of brothers—had three albums reach the top of R&B/ Hip Hop Billboard charts. Their last album, 1995’s The Show, the After Party, the Hotel was their last as a group.

Brothers K-Ci and Jo Jo branched out as a duo. Earlier this summer Mr. Dalvin hinted the group may come together for a new album later this year. So, maybe we don’t have to say goodbye.

If it wasn’t for Andre 3000 and Big Boi’s solo careers we would never see the Atlanta natives grace the stage, but fans are still waiting for the high school friends to reunite on it.

The hip-hop duo, made famous for their mix of Dirty South rap, funk and soul genres, released their debut album in 1994, Southernplayalisticadillacmuzik that went platinum and climbed the Top 20 album charts.

Their outlandish style and original approach to the hip-hop genre have led them to sell over 25 million copies of their eight album releases.

The group’s 2003 double album, Speakerboxx/The Love Below not only garnered number one singles “Hey Ya” and “The Way You Move,” it also reinvented the musical renaissance that started in the late ‘90s.

In 2007, a year after their musical film Idlewild fizzled at the box office, the duo announced a hiatus, a move that’s prompted fans for an apology that’s not just for Ms. Jackson.

I wonder how many times teenage boys serenaded their girlfriends with “Before I Let You Go” before it lost its significance.

What isn’t gone is the appeal this new jack swing group had on the ‘90s musical renaissance.

Singer and producer Teddy Riley founded the group in 1991. Members included Chauncey “Black” Hannibal, Levi Little, and Joe Stonestreet, along with Riley (the group name was originated using Hannibal’s nickname and Stonestreet’s last name) but Stonestreet was replaced with Dave Hollister before the group’s debut album in 1994.

Blackstreet became a platinum-selling smash upon their first album release, but Blackstreet’s second album, appropriately titled Another Level pushed the group to new heights with the pop song “No Diggity,” which was No. 1 on the pop charts for four weeks and snagged the group a Grammy in 1997 for best R&B performance by a group.

However, the late ‘90s were filled with changes for the group with member replacements and record label changes that hit Blackstreet’s popularity hard.

Despite a reunion that was featured on Riley’s solo album in 2003, the group has yet to announce a comeback.

The booming voice and angry growl are unmistakable features of a rapper whose raw talent is pushed to the surface by the insufferable demons he faces.

DMX released his debut album in 1998, but prior to that he made a few guest appearances on R&B and rap songs such as The Lox’s single “Money, Power & Respect.”

His first album, It’s Dark and Hell is Hot was No. 1 on the Billboard 200 and sold over five million copies. DMX’s sophomore album was released soon after, entitled Flesh of My Flesh, Blood of My Blood and had similar success—it was at the top of the Billboard 200 for three weeks, and went triple platinum.

DMX was the second rapper (Tupac Shakur was the first) to release two albums in one calendar year, and have both debut at No. 1 on the Billboard 200, as well as being the first artist to have his first four albums enter the charts at No. 1.

After several delays, last year DMX announced his new album UnDefeated will be in stores next month. It’s his first record in six years.

The name has a whole new meaning these days, but this songbird has enough of a following to know the lasting impression her sultry voice gave us in the early 2000s.

Her debut album Southern Hummingbird also produced two other hit singles, “Call Me” and “Smoking Cigarettes” propelling the album to number three on the Billboard 200 chart. Tweet’s sophomore album It’s Me Again received mixed reviews and led to a five year hiatus. The singer released four new songs on her website and announced her third album Simply Tweet was complete, but release dates have not been reported.

A cohesion of varying personalities, themes and styles, this hip-hop group—made up of rappers RZA, GZA, Method Man, Raekwon, Ghostface Killah, Inspectah Deck, U-God, Masta Killa and the late Ol’ Dirty Bastard—was one of the most eclectic groups of the ‘90s musical renaissance.

They set unprecedented milestones for the hip-hop genre by embracing a variety of collaborators that included Nas, Busta Rhymes and Mobb Deep, and was innovative in giving its members the freedom to create solo projects while riding the wave of the Clan’s popularity.

RZA founded the group in the early ‘90s, and modeled the name after the film Shaolin and Wu Tang.

The group’s debut album Enter the Wu-Tang was met with critical success. It was followed up by 1997’s Wu-Tang Forever album that debuted at No. 1 on the Billboard charts.

The group’s preceding three albums were also received successfully, but after several solo projects from all the group members Wu-Tang has yet to reunite for a new record.

Last summer, Raekwon announced the group was working on its sixth album, but GZA dashed those hopes when he said that time had passed in a recent interview.

With the anemic presence of female rappers in the game these past few years, it’s surprising the self-described pit bull in a skirt has been on the sidelines helping other performers shine.

The Philadelphia native was introduced in the late ‘90s with her debut album Let There be Eve…Ruff Ryders First Lady, which made her a commercial success as the first female rapper to enter Billboard 200 at No. 1.

Eve’s sophomore album Scorpion snagged her a Grammy with the popular single “Let Me Blow Your Mind” featuring Gwen Stefani. The album went platinum soon after.

Since 2005, Eve has made several guest appearances on several R&B singles after a lukewarm response to 2002’s Eve-Olution, the rapper’s lowest selling album to date.

After work on her as-yet-to-be released fourth album Lip-Lock (shelved since 2007 due to a record label dispute) the rapper announced it would hit stores this year.

Which artists did we miss? Who do you think contributed to the ‘90s musical renaissance? Sound off below.