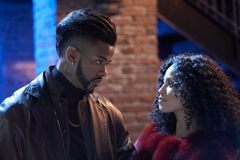 A time existed a few decades ago, when original motion picture soundtracks for urban movies made a bigger impact than the movie itself.

The running joke became that Hollywood only made predominantly Black movies so that they could make a hit soundtrack.

Unfortunately, the 21st century has seen less importance placed on soundtracks, with movies like “Get on Up,” understandably releasing classic songs on soundtracks instead of original material.

However, in 2018 with the release of the “Black Panther” soundtrack, curated by rapper Kendrick Lamar, the urban movie soundtrack has experienced somewhat of a renaissance.

Hopefully, the renaissance continues and does not die out again.

Regardless, RegalMag.com looks at the first four months of 2018 and the epic soundtracks that have set the charts on fire and the soundtracks to come throughout the year.

“Black Panther” curated by Kendrick Lamar—Top Dawg Entertainment/Aftermath Entertainment emcee Kendrick Lamar did his thing with the soundtrack to the instant Marvel classic, “Black Panther.” The hype f0r the movie was off the charts leading to its release date, and the soundtrack was highly anticipated as well. K-Dot did a magnificent job of infusing the sounds of modern day hip-hop with the sounds of Africa to create a sound that was unique enough to fit such a unique movie. Even the visuals for the soundtrack like the video for “All the Stars” by Kendrick Lamar and SZA were captivating and eye-popping. Although the emcee from Compton, Calif. remained the main attraction throughout the project, he allowed other artists from TDE and/or Aftermath to shine as well like Ab-Soul, Anderson .Paak and James Blake on “Bloody Waters” as well as non-label mates like The Weeknd on “Pray for Me.”

“SuperFly” curated by Future—Creating a follow-up to Curtis Mayfield’s soundtrack for the original version of “Super Fly” will prove daunting for rapper Future, but the Atlanta emcee is talented enough to pull it off. Future’s creation might become the first trap music soundtrack and hopefully will showcase some of the best (past and present) from Atlanta’s hot music scene. At press time, a track list and list of artists remain unreleased. However, let’s pray that music lovers get an Outkast reunion track, especially since Big Boi will act in the film. Furthermore, Migos and 2 Chainz are a must and hopefully the legendary Organized Noize, which includes Future’s cousin Rico Wade, will produce some tracks because they often collaborated with Mayfield before his death.

“Before Anythang” curated by Birdman—First Lil Wayne and Birdman seemed to reconcile their differences. Then Turk of the Hot Boys appeared on an official Cash Money Records track for the first time in forever. And to cap it off, Birdman reunited with fellow Big Tymers’ member and former in-house Cash Money producer Mannie Fresh for the track “Designer Caskets,” which appears on the soundtrack to the documentary, “Before Anythang.” However, anyone who follows Birdman can attest that he does not stay nostalgic for too long, always adapting to the new sounds of the day and the soundtrack for his Apple Music documentary is no different. The soundtrack features veterans from the Cash Money heyday, but also features current non-Cash Money superstars like Migos, Young Boy NBA and Gucci Mane. However, the standout track is from Jaquees and DeJ Loaf entitled, “At the Club.”

“A Wrinkle in Time”—Anything including Sade will probably get the attention of 90 percent of brothers. And filmmaker Ava DuVernay managed to get two new tracks from Sade, “Flower of the Universe” and the remix so the soundtrack should definitely get some love. Furthermore, DJ Khaled showed his diversity by producing an inspirational track with Demi Lovato entitled, “I Believe.” Singer Sia contributes a little “Magic” to the soundtrack and Freestyle Fellowship contributes the song “Park Bench People,” which has a 1990s Arrested Development/Us3 vibe. But that soundtrack jams because it is filled to the brim with motivation and inspiration, which is something every demographic can use these days.