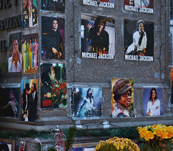 Michael Jackson has two songs (“Man in the Mirror” and “Earth Song”) on RegalMag.com’s 10 most inspirational R&B and hip-hop songs of the last 40 years.

Songs to Keep You Going During a Tumultuous Time

As a result of this turbulent and tiresome political climate, feeling disgusted, downtrodden and downright depressed has become commonplace.

America has seemed to go backwards thanks to the rhetoric of some people in very high places.

But, the end could be near.

Nevertheless, a new regime coming to steer the ship might not come soon enough for some people as this beloved land seems like its moving backwards to an era of blatant hate, racism and sexism.

Therefore, RegalMag.com has formulated a list of the most inspirational R&B and hip-hop songs over the past 40 years that should give people the encouragement to keep it moving in hopes of a brighter tomorrow.

And even though songs like “I Believe I Can Fly” and “U Saved Me” inspired many people over the years, R. Kelly did not survive the selection process for this list because of his past alleged sins.

Despite the fact that the times look bleak, just remember to smile and refuse to go back and forth with these people because ain’t no stoppin’ us now, we’re on the move and we have come too far now to turn back.

“Smile (Living My Best Life)” by Lil Duval featuring Snoop Dogg and Ball Greezy—It’s hard not to look at comedian Lil Duval and not smile and bust out into laughter. But in 2018, Lil Duval took his comedic platform and parlayed it into a positive music career. With help from Snoop Dogg and Ball Greezy, Lil Duval and his boys put everything in perspective. If you’re breathing, you’re achieving, so smile. But the most important message in “Smile” is to not go back and forth with negative people when you have so much positive in your life to celebrate.

“Ain’t No Stoppin’ Us Now” by McFadden and Whitehead—This 1979 anthem goes out to all of the negative people trying to hold a good brother or sister down. No matter what the hater does, there’s nothing that is going to stop you from reaching your full potential in life and getting blessed with God’s best. Although Black America, in particular, has dealt with forces sent to destroy us, the community is still here, bigger, better and stronger than ever. And as long as the community keeps moving forward, nothing can stop its progress.

“Man in the Mirror” by Michael Jackson—Often people like to point the finger when they think about the ills and flaws of the world. While that criticism might be valid, sometimes changing the world for the better starts from within. In this 1987 classic, Michael Jackson simply stated if you want to make the world a better place, take a look at yourself and make a change. If those in leadership positions do not hold up their end of the bargain, then you step up and make a difference in your community.

“Free” by Prince—Although times in America can become difficult, especially for African-Americans, the United States is still the best country on the planet. We have rights that others around the globe do not have and Prince captured that beautifully on his 1982 song, “Free.” The late icon sang, “Be glad that you are free, free to change your mind, free to go most anywhere, anytime…Be glad that you are free, there’s many a man who’s not, be glad for what you had baby, what you got.”

“Smile” by Scarface featuring 2Pac—Two of the best lyricists in hip-hop history had a great rapport and fantastic relationship. As a result, hip-hops got a few classics from Scarface and 2Pac as a duo, before the latter’s passing in 1996. However, the best of the best had to be “Smile,” released in 1996. The song talked about even during the darker times, one has reason to smile and be thankful for their blessings. Pac rapped, “Against all odds, though life is hard we carry on, livin’ in the projects, broke with no lights on, to all the seeds that follow me protect your essence, born with less, but you still precious, just smile for me now.”

“Brotha” by Angie Stone—R&B is inundated with songs about how men are terrible, trifling and no good. But when former rapper (Angie B from Sequence) and R&B songstress Angie Stone dropped “Brotha” with a video celebrating the greatness of Black men, she created a timeless classic. Black men are some of the most misunderstood people on the planet, just look at how brothers are portrayed on conservative media outlets like Fox News. But Stone set the record straight about how brilliant her brothers truly are on the song, “Brotha.”

“U Will Know” by Black Men United—If USA for Africa made a song like “We are the World” to address issues in the Black community, that ensemble of music icons would have likely produced something like “U Will Know” by Black Men United. Although the term Black-on-Black crime is ridiculous because all people are more likely to get killed by someone from their own race because Americans still choose to self-segregate in many cases, the message in “U Will Know” is undeniable. Although Black men have it hard, nobody said life would be easy. Resorting to negativity will not solve the problems in the hood. But sticking with your plans, despite the obstacles, will eventually result in dreams coming true.

“Earth Song” by Michael Jackson—Although “Earth Song” by the King of Pop is not his most inspirational or uplifting song, it is among his most important. On the song, Jackson talked about how human beings are destroying the planet; he talks about children dying because of war. Throughout the politically driven song from 1995, Michael Jackson talks about things that still plague America’s political system from greed, apathy and climate change.

“Keep Ya Head Up” by 2Pac—Way back in 1993, rap icon Tupac Shakur spoke out against toxic masculinity. On his second solo album, Shakur made an anthem to show that not all men and rappers degrade women or do not appreciate the sacrifices that single mothers make for the sake of their children. Although some men like to beat women down and degrade them because of their sexist views, Pac told all of the sisters to just keep their head up.

“I Can” by Nas—Students should recite the words of “I Can” by Nas every morning because it is the best rap song geared towards children with its positive affirmations of what the youth can achieve. With trust in God and hard work, children can become architects, actors or even talk shows hosts like Oprah Winfrey. The song is especially positive for children of African descent because it teaches children about the positive contributions Africans made to this world, even though those contributions are often not taught in today’s classrooms.