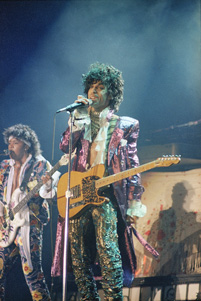 It is funny how someone can be on your mind that you don’t even know personally.

My sister and I talked about Prince’s musical catalogue on April 20.

For some reason, on the morning of April 21, I listened to Prince songs from the “Girl 6 Soundtrack,” including my favorite Prince song of all time, “Adore,” on the way to the gym.

Later on during the morning of April 21, Prince Rogers Nelson was pronounced dead at the age of 57 at his Paisley Park estate.

When a musician dies, news outlets like this one usually rank their best songs or their best albums.

Prince, whose music career began in 1978, has too vast a catalogue for RegalMag.com to insult him with a top 10 list or even a top 20 list.

Therefore, RegalMag.com has decided to honor Prince by picking our favorite song from each one of his studio albums.

We in no way think that our subjective opinion will do his genius justice.

However, it would be an injustice to his legacy if he were not honored in some way in our publication.

Paisley Park is now black, and in mourning, instead of purple.  But the Purple One’s music will live for eternity.

DIAMONDS AND PEARLS (1991)—“Diamonds and Pearls”

THE GOLD EXPERIENCE (1995)—“The Most Beautiful Girl in the World”

CHAOS AND DISORDER (1996)—“Dinner with Delores”

RAVE UN2 THE JOY FANTASTIC (1999)—“The Greatest Romance Ever Sold”