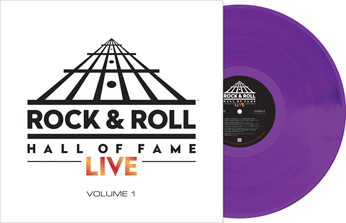 Prince had album covers with him in his birthday suit on the cover (“Lovesexy”).

He had album back covers in the same suit on a white horse with wings (1979 self-titled album).

And he had album covers with him in a blazer and underwear (“Dirty Mind”).

But one concept he did not have until now was a purple vinyl album.

“When iconic rocker Prince tragically passed away this April, he left behind a legacy as a singer, songwriter, multi-instrumentalist, record producer, and actor that may never be surpassed.  To commemorate the wildly talented icon, musical icon and 7-time Grammy Award winner… Time Life will release a special, limited edition of the recently released vinyl album, ‘Rock & Roll Hall of Fame Live—Volume 1…’

“The new pressing, which features Prince’s blistering and unforgettable guitar solo on ‘While My Guitar Gently Weeps’ from his 2004 Rock & Roll Hall of Fame induction, will be highlighted by purple vinyl in honor of the influential star,” according to an official press release from Time Life.

Songs include “Johnny B. Goode,” “(I Can’t Get No) Satisfaction,” “A Change is Gonna Come” and more classics by various artists.

In a performance in which Prince offers only his chops on the guitar, “While My Guitar Gently Weeps” by George Harrison of the Beatles is the perfect song to show his skills on his “axe” of choice.

The Minneapolis native takes over with his guitar solo halfway through the performance and carries the song the rest of the way like only he could, throwing his guitar over his shoulder and exiting stage left.

Those that are turntable challenged can purchase the video performance on iTunes for only $2.99.

“Following Prince’s passing, we recognized that we needed to do something truly special to commemorate his indelible musical legacy,” said Jeff Peisch, SVP of New Product Development & Marketing for Time Life.  “When the first run of ‘Rock & Roll Hall of Fame Live’ sold out immediately, the opportunity presented itself to do a purple vinyl pressing that perfectly captures the ‘Purple One,’ and is sure to resonate with those who loved his music and style.”

Style is the perfect word to describe Prince’s artistry from the music to the cover art and now even the purple vinyl.

Get your copy of “Rock & Roll Hall of Fame Live—Volume 1” featuring Prince today.