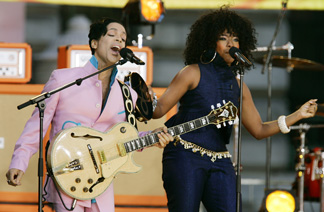 The man behind “Purple Rain” has gone by many monikers since his debut in 1978 such as Prince, The Kid, The Artist, Jaime Starr and an unpronounceable symbol.

However, after the riots in Baltimore following the death of Freddie Gray, Prince can borrow the moniker prince of peace because of a benefit concert held in the turbulent city.

The Minneapolis native’s catalog is much too vast to list his best songs.

Therefore, RegalMag.com has decided to focus on a part of his career that is often overlooked, his best socially and politically poignant songs.

Unfortunately, America is at such a divisive point in history that it needs music with a message more than ever.

“Ronnie, Talk to Russia” (1981)—Many of Prince’s songs contained various metaphors and hidden messages, but this song off the “Controversy” album was as straight forward as could be.  Released the same year as President Ronald Reagan’s first inauguration and in the midst of the Cold War, Prince expressed many American’s fears that nuclear attack from Russia was imminent.  The musical genius sang, “Ronnie talk to Russia before it’s too late, Before they blow up the world.  You go to the zoo, But you can’t feed the guerillas, Can’t feed the guerillas, Left-wing guerillas, You can go to the zoo, but you can’t feed guerillas who wanna blow up the world.”

“Free” (1982)—Packaged with songs about female body parts (“Little Red Corvette”) and songs about the apocalypse (“1999”), “Free” from the “1999” double album is one of Prince’s most beautiful songs because of its arrangement and message.  The song talked about the importance of freedom when people in other countries are not afforded the same luxuries. The lyrics state, “Soldiers are marching, they’re writing brand new laws, will we all fight together 4 the most important cause?  Will we all fight 4 the right 2 be free?  Free (Be glad that U r free), Free to change my mind (Free 2 change your mind), Free to go most anywhere, anytime.”

“The Ladder” (1985)—Casual Prince fans may not know this, but his religious faith has always played a big role in his music.  Yeah, yeah we know, how can one be religious with songs like “Sexy M.F.,” “Head” and “Cream” but “The Ladder” emphasized the necessity that is salvation of the soul.  The song even takes place in a land called “Sinaplenty.”  The lyrics read, “Everybody’s looking 4 the ladder, everybody wants salvation of the soul.  The steps u take are no easy road, But the reward is great 4 those who want 2 go.”

“Sign ‘O’ The Times” (1987)—The title track from “Sign ‘O’ The Times” does not get the same respect as Marvin Gaye’s “What’s Going On?” but it might have been the 1980s version.  The song talked about everything that troubled the world at that time from the AIDS epidemic, to crack abuse, gang violence, natural disasters and murdering one’s own children.  Unfortunately, the lyrics simply depicted the sign of the times.  Prince sang, “In France, a skinny man died of a big disease with a little name, By chance his girlfriend came across a needle and soon she did the same, At home there are 17-year-old boys and their idea of fun is being in a gang called the Disciples high on crack and totin’ a machine gun.”  Too bad for Prince and our society because the more things change the more they stay the same.

“Money Don’t Matter 2 Night” (1991)—This hidden gem from the “Diamonds and Pearls” album did not get much airplay outside of “Video Soul” on BET, but its message is just as relevant today as it was 24 years ago.  The message behind the song is sacred; money is temporary but your soul lives on forever.  In an era in music where opulence is celebrated, a song about the importance of one’s soul over one’s bank account is very much needed.  With his new band The New Power Generation, the purple one sang, “Money don’t matter tonight, It sure didn’t matter yesterday, Just when you think you’ve got more than enough, That’s when it all up and flies away, That’s when you find out that you’re better off makin’ sure your soul’s alright, ‘Cause money didn’t matter yesterday, and it sure don’t matter tonight.”