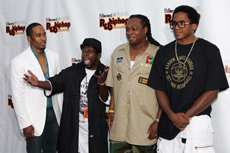 Anytime a hip-hop artist gets inducted into the Rock and Roll Hall of Fame it causes controversy.

However, the latest rapper to earn the coveted induction, Tupac Shakur, does need company in Cleveland, the location of the Rock and Roll Hall of Fame.

Therefore, RegalMag.com has five suggestions for the voters to consider in the coming years.

Keep in mind that in order to be considered for induction, an artist’s debut album has to be 25 years old.

L.L. Cool J—Queens, N.Y. native James Todd Smith is one of the few rappers from the first generation of hip-hop who is still relevant in Hollywood.  He was the first superstar on hip-hop’s most important record label, Def Jam, and has transitioned into a bona fide acting superstar.  L.L. won a Grammy Award for the 1990 classic “Mama Said Knock You Out” and is credited with recording the first successful hip-hop love song, “I Need Love” in 1987.  His career has also withstood battles from the likes of Kool Moe Dee, Ice-T and Canibus.

Geto Boys—Houston legends Geto Boys are most responsible for putting Dirty South rap on the national map via Rap-a-lot Records in 1991 with “Mind Playing Tricks on Me.”  The Geto Boys were to Houston what N.W.A was to Compton, Calif.  The group from the Fifth Ward neighborhood of north Houston was able to crossover without losing their identity.  Furthermore, they proved that the South had something to say thanks to the politically charged raps of Willie D, the charisma of Bushwick Bill and the clever lyricism of Scarface and Big Mike.

A Tribe Called Quest—Much is made about the N.W.A family tree, but A Tribe Called Quest’s style birthed the careers of some of the greatest hip-hop figures in history such as J Dilla, Kanye West, Common, Mos Def, Talib Kweli and Lupe Fiasco.  The group from the boulevard of Linden had hit after hit in the late 1980s and early 1990s such as “Bonita Applebum,” “Award Tour” and “Check the Rhime.”  The way Tribe fused jazz and hip-hop with intelligent subject matter created some of the most innovative sounds to come from rappers.  In 2016, the group released its final album with late member Phife Dawg, “We Got it From Here…Thank You For Your Service.”

Eric B and Rakim—2017 would be the perfect year for Eric B and Rakim to earn induction into the Rock and Roll Hall of Fame because the duo is reuniting in 2017.  The East Coast duo’s debut album “Paid in Full” ushered in the golden age of hip-hop and introduced an innovative style of emceeing.  Rakim’s lyrics on that debut album still stand the test of time with its complexities and internal rhymes.  The group had major hits such as “Don’t Sweat the Technique,” “Eric B is President” and “I Know You Got Soul.  The god M.C., Rakim went on to work with such legends as Jody Watley, Dr. Dre, KRS-One, Nas and Kanye West.

Big Daddy Kane—Big Daddy Kane does not get the respect he deserves outside of diehard hip-hop circles.  His style influenced the style of icons like Jay-Z.  He was one of the first rappers to bring a suaveness to rap music.  And he was one of the first rappers to become a movie star with roles in movies like “Posse” and “The Meteor Man.”  Kane brought a unique wardrobe and unique showmanship to go with such classics as “I Get the Job Done,” “Smooth Operator” and “Ain’t No Half-Steppin’.”  With Rakim, he was arguably the best lyricist of the late 1980s.  Kane’s popularity waned with the popularity of gangsta rap.  However, his talents and influence are undeniable.