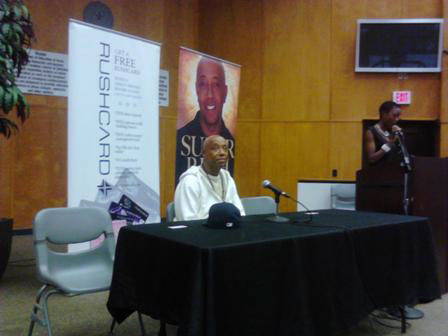 Russell Simmons Super Rich plunges deep into the spiritual practices that have become very important to Simmons as he continues to mature.

“I wrote the book primarily for people who felt locked out and threatened,” he told Regal Magazine.

Most people reading the title Russell Simmons Super Rich would assume that the book is about monetary growth.

Perceptions will change when readers discover that Russell Simmons Super Rich is about his personal transformation through different practices such as yoga and becoming a vegan.

Simmons gives many personal examples of himself when he talks about his own transformation from an out of shape carnivore, drug dealing, and cold hearted hustler to a charitable activist and multi-million dollar tycoon.

The most important message throughout Russell Simmons Super Rich is eliminating the feeling of neediness and devoting yourself to service and benevolence instead of success and depletion.

It becomes very noticeable that Russell Simmons Super Rich is not about materialism but rather discovering spiritual riches.

“Eliminating neediness which is the cause of suffering is a very attractive thing,” he added.

Russell Simmons Super Rich brings forth the power of Christ consciousness and becoming awake in order to be vigilant and enlightened.

“This idea of being awake is the goal of each person,” he said. “We all want to be able to drive through the street and see each flower as we see it and not to have the noise in our heads.”

Simmons target audience is not specifically for the businessman and company owners, but more of the less fortunate and under motivated individuals looking for a way to prosper and become more spiritually in tune with one’s self and a higher being.

“I wrote this book for the kids on the corner and the people in the prisons,” he explained.

“That they can have the courage to change their lives; something that they were doing that was hurtful to themselves and others that they will stop doing it.”

Simmons shared with Regal Magazine how he measures and maintains success.

Russell Simmons Super Rich is a must read, filled with powerful life changing techniques that alter what success or “super rich” really means.

Winston is a contributing writer for Regal Black Men’s Magazine, a publication dedicated to the African American community.