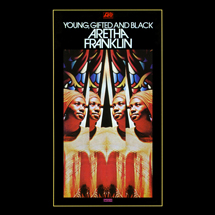 The queen has received her reward in Heaven, but RegalMag.com would like to take time to thank her for rewarding us with a treasure trove of classic albums to enjoy in perpetuity.

Everyone at RegalMag.com had their own favorite album by the “Queen of the Soul,” but “Young, Gifted and Black” won out as the favorite amongst those in the office.

Sure, Aretha Franklin’s “Who’s Zoomin’ Who?” received a platinum plaque for 1 million sales, and her 1972 album, “Young, Gifted and Black” only received a gold plaque, symbolizing 500,000 in sales.

Furthermore, albums like “Lady Soul” did better on the pop charts, but that 1972 album remains the standout album for the “Queen of Soul.”

On “Young, Gifted and Black,” the Detroit native combined the best of three worlds, blending soul, gospel and Black empowerment into a masterful body of work.

Before 1972, Franklin had made her presence known in the Civil Rights Movement and throughout the Black community by performing concerts throughout the country to raise money for Martin Luther King, Jr. and the Southern Christian Leadership Conference.

But at the height of her commercial success, she refused to shy away from the political messages of the day with her interpretation of the Nina Simone anthem, “To Be Young, Gifted and Black.”

Always a powerhouse singer, Franklin continued to show just how broadly her talent extended by writing classic tracks on the album like “Day Dreaming” and “Rock Steady.”

And she showed her crossover appeal, with renditions of songs written by John Lennon, Paul McCartney, Elton John and Burt Bacharach.

And what singer has the respect to have session musicians and background singers like Donny Hathaway, Billy Preston and The Sweet Inspirations help her out on an album.

With “Young, Gifted and Black,” Franklin gave the blueprint of how to make a crossover record without really crossing over or forgetting her Black roots.

And her 1972 performance on “Soul Train” while promoting the LP is nothing short of legendary.

So 46 years later, RegalMag.com looks back at the monumental piece of work from Franklin’s catalog entitled, “Young, Gifted and Black” track by track.

“Oh Me Oh My (I’m a Fool for You Baby)”—Franklin had the rare ability to cover a song and make it more popular than the original artist. Ask Otis Redding about “Respect.” Ask Simon & Garfunkel about “Bridge Over Troubled Water.” And ask anybody who sang “Amazing Grace” before or after the “Queen of Soul.” There’s no comparison at all. The same goes for Lulu’s 1969 hit, “Oh Me Oh My (I’m a Fool for You Baby).” The first track on Side A of “Young, Gifted and Black” is a song of how foolish one is willing to make themselves look for the one they love.  Even if people stop and stare, the singer does not care. To make their mate laugh, they would be a fool for you, baby.

“Day Dreaming”—Written by Franklin herself, “Day Dreaming” stayed at number one on the Hot Soul Chart for two weeks and peaked at number five on the pop charts. On the track, Hathaway plays electric guitar and Houston native Hubert Laws, from the Studewood neighborhood, plays flute on the single. Rumor has it that Franklin wrote the song about Dennis Edwards of The Temptations. The angelic opening of the song is priceless. And the song speaks to something people all over the world can relate to, finding the perfect mate and doing whatever it takes to please them. It does not matter what you do together, just as long as the two of you are together.

“Rock Steady”—“Rock Steady,” also written by Franklin and produced by Jerry Wexler, has to be one of the queen’s funkiest jams ever. On this track, which peaked at number two on the soul charts and number nine on the pop charts, Franklin again worked with Hathaway who plays electric piano and organ on the track. Additionally, Franklin also got a little help from The Memphis Horns. In the song, Franklin said, let’s call this song exactly what it is. And it is just a song that rocks steady from beginning to end. The song forces listeners to move their hips from side and side and it’s the perfect song to play when you take a ride. It’s a straight up funky and low down feeling. That’s what it is, what it is, what it is. In 1972, if friends or family members put that song on, a party would jump off. And in 2018, fans still party to this timeless funk classic.

“Young, Gifted and Black”—Although the title track was a cover of Simone’s classic, and James Brown had already dropped the classic, “Say it Loud (I’m Black and I’m Proud)” a few years earlier, “Young, Gifted and Black” was perfect for the Black is Beautiful movement during the early 1970s. The anthem reminded Black youth of their glory, potential and immense talent.

“All the King’s Horse”—The classic song is about a love lost and an irreparable relationship. All the king’s horses and the all the king’s men couldn’t put their two hearts together again, Franklin writes and sings. The relationship was happy, secure and like a fairy tale but it still failed. “All the King’s Horses” starts off in a mellow and melancholy way, but hits an emotional crescendo, which shows the passion the singer still has for her ex-lover. But the song returns to melancholy when reality sets in again that the relationship was officially over and done with.

“Brand New Me”—In “Brand New Me,” Franklin sings about having the same ole clothes and same ole shoes with the same ole blues. However, when she meets the special someone, she becomes a brand new person. This track that concludes Side A of “Young, Gifted and Black” is another example of covering a song and taking it to the next level. The song, which Dusty Springfield made a hit in 1969, was written by Kenny Gamble, Jerry Butler and Theresa Bell and has a jazzy and gospel feel that almost makes the song sound like a double entendre.

“April Fools”—Bacharach and Hal David penned such timeless classics as “Raindrops Keep Fallin’ on My Head,” “Walk on By,” and “I Say a Little Prayer.” Although “I Say a Little Prayer” became a hit for Dionne Warwick first, Franklin made another successful rendition of the song. Bacharach and David reunited with Franklin for “April Fools” in 1972, another cover of a Warwick classic. “April Fools” tells the story of a lady who thinks she is in love and has met the one, but can’t see the danger they will face down the road.

“I’ve Been Loving You Too Long”—Most singers do not have the chops to cover Warwick, Simon & Garfunkel and Redding. But Franklin is not most singers and very few have the singing chops that she possessed. While Redding’s “Respect” became Franklin’s song in pop culture history, Redding still owns “I’ve Been Loving You Too Long” because even Franklin cannot top Otis with this one. But not topping Redding is no diss. Furthermore, the song fits in with the other songs on “Young, Gifted and Black” about bad and failed relationships.

“First Snow in Kokomo”—Although “Young, Gifted and Black” contained its share of covers, Franklin returns as songwriter in “First Snow in Kokomo.” A true mellow groove, this song is great because of the vivid picture it paints of the characters in the story. One can almost see the actions of Chuck, Kenny, Jimmy Dee, Applegate, Reggie and Freddie playing out as the “Queen of Soul” narrates their story via song.

“The Long and Winding Road”—Very few can sing a Beatles song better than The Beatles. The only artists to come to mind are En Vogue (“Yesterday”), Boyz II Men (“Yesterday”), Michael Jackson (“Come Together”) and of course, Franklin herself. While the classic from The Beatles’ “Let it Be” album had an orchestra feel, Franklin took her fans to church on her version. Like her Atlantic Records brethren Ray Charles, Franklin is one of few artists that can give an R&B song a gospel feel. Later on hip-hop artist/producer Pimp C of UGK made it an art form for rappers as well with his use of organs.

“Didn’t I (Blow Your Mind)”—With all due respect to “Sister Soul”, the best rendition of “Didn’t I (Blow Your Mind)” still belongs to The Delfonics. Franklin came the closest with her cover, and Jackie Jackson of the Jackson Five came in third place. But first place still belongs to “mighty, mighty” Delfonics. Something about the falsetto of William Hart makes it the ultimate version. While The Delfonics and Jackson’s version had a pop feel to it, Franklin again takes us to the church house with her 1972 cover of the hit written by Thom Bell and Hart. Even New Kids on the Block covered this classic on their 1986 debut album.

“Border Song (Holy Moses)”—With the closing track of “Young, Gifted and Black,” Franklin again covered a legend in Elton John. And unlike The Beatles, John has chops almost as equal to the queen. While John is definitely soulful, no one brings the soul like the native of Detroit. What stands out throughout the album and on the closing cut is how phenomenal Franklin’s background singers were. Throughout her career she worked with some of the best background singers like Cissy Houston. But in 1972 she kept a lot of the backing in the family, working with her sisters, Carolyn and Erma Franklin among others.