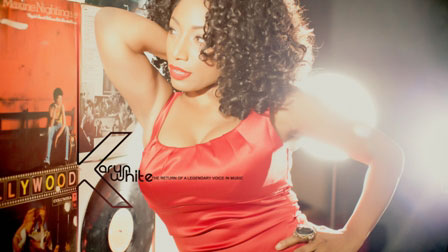 I’m not your superwoman

And think that everything’s okay

Boy, I am only human

It has been 24 years since Karyn White bellowed those lyrics to the world that previously lived in the back of most women’s minds. And now she returns with a new female anthem: “Sista Sista,” a rallying call for unity among women.

“I was talking to Bridget Kelly [newly signed Roc Nation singer] and she said there is no unity among us [R&B female singers] and asked if it was like that when I was in the industry,” White reveals to Regal. “The women today are like, ‘I’m hot, look at me.’ We’ve got to get beyond that.

“[With] ‘Sista Sista’ I’m trying to say to women that I’m like you, I’m no better. We are mothers of the Earth, we give life; we are the leaders.”

However she points out men are no less important.

“Please keep in mind that my songs are never intended to bash or batter men, and this song is no different; but ‘Sista Sista’ is for my ladies,” White tells R&B online radio station 106.3. “I want women to really look at themselves, as opposed to looking at others, point at themselves in the mirror and work on fixing themselves.”

The award-winning artist says her new album—out in March—couldn’t come at a better time.

“The title of the new album is ‘Carpe Diem,’ seize the day and that’s really what I’m doing, I’m living it and experiencing it. I feel like a new artist.”

After a 17 year absence from the stage, White finally feels like the superwoman she claimed she wasn’t earlier in her career.

It took a while for White to remember that despite an abundance of success she received on her platinum-selling debut album “Karyn White” (1989) and her follow-up “Ritual of Love” (1992) that went gold.

“I had all this success—a 30,000 square foot home—but why am I unhappy? I didn’t like who Karyn the person was. My spiritual person was off-balance.”

So in order to regain her footing she took time to be a mother (White’s daughter is enrolled at Howard University), friend and cook; as well as enduring two life changing events that shaped the woman she is today.

“Once I failed at marriage I thought this is not cool,” White recalls. “To lose an incredible human being [like] Terry Lewis (award-winning producer), that loss was devastating, it shook me up; it put things in perspective.

“When we divorced, I became a woman because my mom passed at that time, and I really depended on the Lord.”

Now White wants women to look to her as an example that comebacks are possible regardless of the obstacles.

“I hope someone will say if Karyn White can do it after 17 years, I can,” White says.

Her reluctance to enter the studio again was overpowered by her manager, Jay King reminding her of her greatness.

White, 47, says the encouraging words helped her realize that if you don’t believe in yourself let your success be measured by the success in your heart.

As White finishes up what is to be her fourth album she says she hopes it will bring more variety to soul music fans.

“When you put Michael Jackson, Whitney Houston, Aretha Franklin and Anita Baker all in the same group, they are all different. Give me a rainbow. I don’t like [that] radio is forcing this pop type music. Music is real, not manufactured.”

Prompting Karyn White to flex her entrepreneurial muscles—she currently has an interior design and real estate business—by launching her own Web site, karensworld.me that will include her new album for sale. In addition to the site, she will also have seminars for women, tutorials and a reality television show.

“I’m targeting women in their late 30s to 50s because [that range] is not young but not old,” White explains. “[They question] whether they can still achieve their goals. I want to express [to them] that the only thing that can stop you is you. And it’s never too late to be what you might have been.”