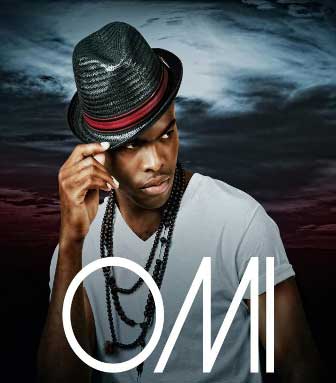 Music That Makes a Difference

“I come to make a difference.  I want to be one of the greats,” said OMI about his musical ambition.

The son of a Jamaican musical and visual artist, the musician born Omar Samuel Pasley found his early inspiration in his father’s artistic achievements and the diversity of the Jamaican musical movement.

After his father, known musically as Jah Ken, died when his youngest son was only nine years old, OMI found more inspiration to use his music to anchor his family and inspire all of those around him.

OMI’s musical roots come from his background of singing in the church to the diversity of Jamaican music.  He blends elements of all of his musical influences to create a sound that is all OMI.

“When you are from a culture where there’s so many different expressions, you start having an appreciation for all cultures,” said OMI.

One such culture that had a profound effect on a young OMI was the hip-hop culture that permeated the streets of America but even influenced those abroad.  He learned he had a special gift of creating melodies and storytelling while rapping in school with classmates providing the perfect beat for him on desktops and tables.

“I love to write.  I love the art of storytelling,” said OMI who finds his inspiration from everyday life and the experiences of others.  Like a journalist, OMI interviews people in his life in an effort to empathize with their experiences, which enables him to vividly depict their story in song.

The art of songwriting also allows him to see and experience things from a perspective that he has not seen in the same vein as an actor who becomes a character in film.

And like film, music has a certain power and influence over people and OMI is determined to use it to make a positive difference in the lives of others.

His gospel and Jamaican musical roots influence him to blend messages of love, hope and social change in his art, which he hopes will appeal equally to both the older and younger demographic.

More importantly, his musical and cultural background, combined with the support from his producers and record label, are allowing him to just be OMI, which is rare in today’s musical landscape, which is filled seemingly with more imitators than originators.

“What I want my fans to see is OMI being real, being myself,” he said.  And what OMI is and represents is diversity and fans will definitely see his diversity in his upcoming album, which is currently untitled.  His single “Cheerleader” is sure to be an instant classic on the radio waves.

Ideas are flooding OMI’s creative space in regards to the album title as well as his future and ultimate goals in the music industry.

OMI said, “I see myself being a producer.  I see myself helping other people who are in a position like myself, having the talent and love for the music.”

And he is sure that his fans will have “mad love” for his new project and that love will permeate to all aspects of life from relationships to the social issues that people face on a daily basis.

Simply put, if his career lives up to the high expectations others have for him, his music will definitely make a difference in the world for years to come.