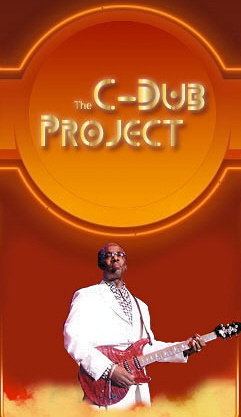 The Ohio Players’ lead guitarist, Clarence “Chet” Willis, steps away from the group’s legacy to release his solo debut “The C-Dub Project.”

Who better than one of the original architects of funk music to take us on a ride through the varied sound-scapes of R&B and jazz?  And that is just what Clarence “Chet” Willis does with his solo album “The C-Dub Project.”

But, now he’s creating his own musical twists and turns that differ from the Ohio Players’ “Love Rollercoaster”- like melodies.

“My [writing] partner [Harry “Harry O” McCloud] and I ventured out on this thing, and it [the “The C-Dub Project” album] doesn’t sound anything like the Ohio Players music and that felt good,” said Willis, who has been the lead guitarist for the Ohio Players, a nine-member (four original members still continue to jam together) band, for 38 years, a career longevity he jokingly compares to work at GM or Ford Motor Company.

“‘The C-Dub’ album has some resemblance to other things we heard, and we’d take the sounds and replicate them, rather than take a sample,” shared Willis, a Dayton, Ohio native turned Atlanta resident, about the value of creating original music, which was reinforced with the Ohio Players.

“That’s why we were called the Ohio Players because we played,” added Willis.

The band not only played soul music, the group set the Billboard charts ablaze with songs like “Sweet Sticky Thing,” “Funky Worm,” “Who’d She Coo” and “Fire” (sampled as the theme song for Fox’s “Hell’s Kitchen” reality competition show), which all topped the pop and R&B charts in the 1970s, and resulted in three consecutive Platinum records: “Skin Tight,” “Fire,” and “Honey” for the band.

Willis said the band still does performances throughout the country but rejects the idea the band is touring.

“We don’t say we tour; our concept of a tour is a string of dates. We do [shows] ever so, ever so…sporadically,” shared Willis.

And whatever performance dates the Ohio Players have in the coming year will unfortunately be without their lead singer Leroy “Sugarfoot” Bonner who died in January.

When asked if Willis imagined he would still be setting sirens off on stage performing “Fire” with the band, he gave a quick no.

“I can tell you right now, no. No, no I didn’t. There was one time after being in the band, Diamond (Ohio Players’ drummer James Williams) and I were saying once we turn so and so [age we’d leave], so and so [age] passed a long time ago,” revealed Willis with a chuckle.

What remains is his love of music that has been his motivation in creating “The C-Dub Project” (the album’s title is a remix on Willis’ first name) that was 14 years in the making after a major transition.

“I had recently moved to Atlanta and found folks to play with in church and had this idea to ease separation anxiety [I felt leaving] Dayton, Ohio,” explained Willis. “Got to doing that kind of stuff to keep myself…myself,” he added.

“The C-Dub Project” was birthed out of Willis and McCloud’s musical influences of the 1960s, and they labeled it “new music for the old school audience.”

“Old school doesn’t have to be on in their years. This music is for everyone. You put on each song and they all sound good,” assured Willis.

“The C-Dub Project” has an eclectic sound mix with a blending of the 1970s style with “Ride,” to a more jazzy and electronica-inspired track “Someday Sundai.”

Willis said he experimented with the inclusion of drums on the album that helped make it a departure from the band’s music.

However, out of the group’s shadow and into the solo spotlight caused trepidation, but not related to the music.

“Yes, I had trepidation because I’m a musician and there are things I’m not aware of; this thing called the Internet and now there are MP3s, digital downloads. I was learning what all of that was about,” confessed Willis.

This Ohio Player’s on-the-job training helped him see the value in the new technology.

“One thing about today’s technology, you can pull up stuff on the computer: iTunes, Amazon, and if you have an account you see where things are selling…rather than go to the recording company and ask to see the books.”

The technology also makes it possible to hear directly from his fans about the new album. Instant feedback for “The C-Dub Project” has garnered these comments:

“I read a few comments that said they like how it’s real smooth and jazzy…and reminiscent of something they like to get in their car and listen to while driving,” revealed Willis.

Willis promises another solo album in the near future and will continue to perform with the band until he does.

“I’m still motivated to see what the music is about. With the four original guys still left, we have the same attitude: we love the music.”