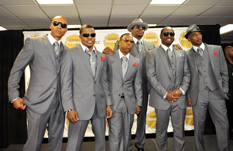 A Year to Remember

The year 2017 is shaping up to be the best ever for the original boy band New Edition.

First, BET will release a three-part miniseries on their turbulent but successful career.

Crooner Johnny Gill has hinted at a possible album to accompany the release of the miniseries.

Now, the Hollywood Walk of Fame will also honor the sextet with its own star next year according to an Instagram post by New Edition member Michael Bivins Tuesday.

New Edition burst onto the R&B scene in 1983 with their hit single and album “Candy Girl.”

After a split from Streetwise Records and the musician that discovered them, Maurice Starr, New Edition signed with MCA Records and released their self-titled album in 1984.

That album produced hits like “Cool it Now,” “Mr. Telephone Man” and “Lost in Love.”

Brown’s biggest solo hit was “My Prerogative” in 1988.

Tresvant went solo in 1990 with hits such as “Sensitivity.”

Bell Biv DeVoe formed a trio and released the hit album “Poison” in 1990.

And Gill reignited his solo career in 1990 as well, releasing such hits as “Rub You The Right Way” and “My, My, My.”

The group continues to pack concert venues throughout the world 33 years after they first burst onto the scene.