Losing Legends of the Motown Sound 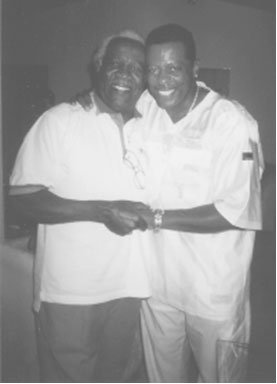 Bill Pinkney and Ali-Ollie Woodson: A Musical Legacy and Alliance Built on Love

For many of us watching documentaries about the Motown Sound and the musical giants in the spotlight and those behind the scenes brings back happy memories. For others, it reflects the relationships that took place among those performers who, at the end of the day, were just people.

In July 2007, when musical legend Bill Pinkney of the Original Drifters died suddenly, among his many mourners was another musical legend Ali-Ollie Woodson, former lead singer of The Temptations.

Woodson gave a heartfelt rendition of “Walk Around Heaven All Day” at Pinkney’s funeral service in South Carolina that drew attendance from the music industry’s elite.

Woodson always revered Pinkney and referred to him as a major figure in his life. Biographical references to Woodson, who lost his battle to leukemia in May 2010, include him considering Pinkney his father in the music business. Woodson is known for his role as part of the Motown Sound, but he got his start as part of the Drifters family with Bill Pinkney.

Pinkney, who had served this country with distinction in World War II earning a presidential citation with five bronze stars, returned from the war and returned to his musical roots which brought him in contact with the original members of the Drifters.

Often cited as inspirational trailblazers, they were voiceless without individual names and faces to still segregated mainstream America. They did not receive the media exposure afforded to later artists.

During Pinkney’s tenure with the group in the 1950s, prior to  the explosion of the Motown Sound in Detroit, his voice could be heard and is well remembered on songs such as ”Money Honey” and “White Christmas.”

In 1958, Pinkney was fired for allegedly asking for more money for the group members, who were consistently underpaid. The manager replaced him and other members who left in protest.

Pinkney, an astute businessman, immediately formed the Original Drifters with earlier members of the group and took legal steps to protect their name and legacy.

They toured the world providing entertainment to audiences of all ages and encouragement to aspiring singers and musicians. Pinkney blazed one of the deepest and most unique trails in music history.

Before he was a prominent lead singer with the Motown Sound sensation The Temptations, Ali Woodson became a part of the Original Drifters experience in the 1970s at the age of 19.

Woodson made his mark in the Motown Sound arena as the lead singer for The Temptations from 1984 to 1986 and achieved success with The Temptations that peaked in 1984 right at the start when he co-wrote, co-produced and sang the lead on “Lady Soul” and the group’s 1984 hit single “Treat Her Like A Lady” with a rousing introduction that invoke pleasant memories overall about the Motown Sound.

Woodson returned to his roots to work with Bill in 1996 on the Original Drifters’ gospel song “True Love.”  He never forgot the role that Pinkney played in his career and the importance of reaching back to help bring others forward.

Pinkney was preparing to perform and to do what he loved to do best, bring the message of love and togetherness to all people through music, when he was taken suddenly.

Woodson maintained a strong will to live despite the ravages of cancer and continued to inspire and to keep those he loved close and, when he could, he always returned to the music.

These two musical legends shared their musical talents with the world and a special friendship with each other that left a legacy of love for those who knew them.