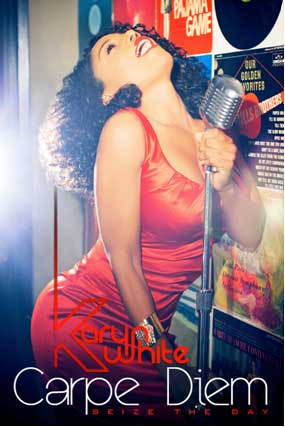 The woman who gave all women around the world a voice with the empowering song that became their anthem…”Superwoman” is BACK  and scores another anthem with “Sista, Sista!”

Karyn White, Grammy Award nominated singer/songwriter who has worked with super producers Jimmy Jam, Terry Lewis and BabyFace, just to name a few, will make her triumphant return with her three-night performance series at San Francisco’s famed Rrazz Room, located in the Hotel Nikko in beautiful Union Square. The special shows slated for March 1-3, will kick off her national tour.

White is returning with great new R&B/Pop music, led by her current single, “Sista Sista,” another anthem for the ladies, promoting female empowerment. The song is the first single off her highly anticipated CD “Carpe Diem” (Seize the Day), due for release on KW Entertainment in May 2012.

Fans can expect White to entertain them with  new songs and take them back in time with some of her smash hits including “Love Saw It,” “The Way You Love Me,” “Secret Rendezvous,” “Romantic” and of course the show wouldn’t be complete without “Superwoman.”

How appropriate for White, the champion of music that speaks to the ladies to make her long awaited resurgence in March. March is Women’s History Month with the 2012 theme being Women’s-Education-Women’s Empowerment.