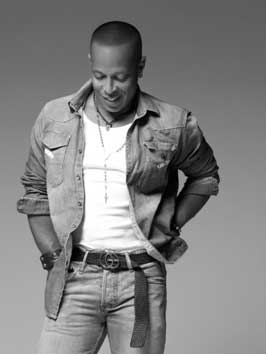 He is also infusing the social activism that was often highlighted in Gaye and Marley songs during their careers.

“In addition to their own distinctive musical styles, both of these legends influenced me in a number of ways,” stated David. “They made statements in their songs…they made people think about the world around them. I want to both entertain and to be thought-provoking in my music.”

David M, who was born in Jamaica and lived in New York for a year, lived and studied in Barbados.

His music is an eclectic mixture of rhythm & blues, reggae and pop. Many try to pigeon-hole David M as a reggae artist, especially when they hear that he was born in Jamaica but he prefers a broader view of his music and his lyrics.

“Actually, I think I am more R&B and it is not about the type of music that I make – it is more important for me to raise consciousness about world issues and connect it to the musical format that works the best,” he added.

In his debut album, “Here Comes Your Life,” David M brings a diverse array of musical styles that speak to a number of issues close to his heart.

A current issue that is high on his priority list is the circumstances in Haiti and how the problems of this island nation are long standing and started before the devastating earthquake.

“Haiti’s insurmountable misfortunes started well before the earthquake, which only added to the historic upheaval there beginning with its independence and the extreme debt that Haiti incurred to be free from France.”

David M’s emphasis on thought provoking issues and creating avenues for listening and discussion is only a part of his musical journey. He is most known for the social commentary track “Lest We Forget” that highlights the re-emergence of the Black movement and President Barack Obama’s election.

“While we have come far and have much to celebrate, there are still issues that we have to keep the focus on – the underdevelopment of Haiti is chief among them and educating our people about the real story is vital.”

However, even social commentary requires a lighter side. “Girls Night Out” has a R&B flavored mix that is good for dancing and the title track, “Here Comes Your Life,” provides a serious reminder about our past and how to make sure that you make the best out of your situation.

“My life had a number of stops and starts, but now that I am forging ahead and following, I would encourage anyone to follow their passion in making the decisions that are best for you and try to give yourself to something that is important.”

David, who began playing piano music at the age of six and credits his father’s motivational and musical background,  is focused on the completion of the album and the tour which will include the United States, the Caribbean and Europe starting this year.

When he does tour, David M wants his listeners to think and ask questions not just about their own circumstances, but the world around them. Having a global view is important to him and the goal for his music.

“I want to be a socially conscious writer and to engage the minds of those who listen to the music and let me know what they think.”

His album, “Here Comes Your Life” is the debut album of the current generation’s social activist who wants to keep our past in the forefront to positively influence our present and future.