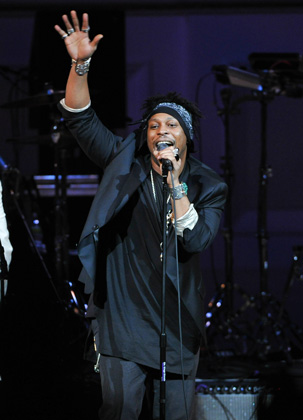 The return of D’Angelo to the music scene Monday with the release of “Black Messiah” has given many hope that the return of the Black male crooner is here (Photo Credit: Evan Agostini/Invision/AP).

The Return of the Black R&B Crooner?

“I think in the 2000s, mainstream R&B in its traditional sense became a dirty word because of the prominence of hip-hop. Making mainstream R&B wasn’t as cool anymore for some artists, and it wasn’t the commercially successful genre that it once had been starting around 2003-2005,” King said.

To reclaim those cool points some Black male R&B singers have abandoned the slow jams for catchy pop tunes that have recently blurred the lines between R&B and pop music.

“R&B singers like Ne-Yo were exploring more Euro dance-based sounds around 2007 or 2008. They were moving outside of traditional R&B instrumentation to explore a wider range of dance, pop and hip-hop sounds,” King explained, who cites artists’ fear of being pigeonholed along with their desire to crossover into the mainstream as reasons for the musical metamorphosis.

It’s a transformation most recently seen with Black male R&B singers like Usher and Chris Brown, both carved out of the bedrock of R&B, but steadily moving towards the pop genre with every new song they create.

“Chris Brown’s music… of late, it feels a bit all over the place. A couple of years ago he adopted a Euro dance style because that was commercially popular at the time,” King said.

“And now he’s doing songs like ‘Loyal.’ It seems like any number of R&B artists have been creating careers by chasing musical fads. While that works in the immediate, it doesn’t say much for a career over time.

“And my issue with Usher is that he’s got a great body of work, a great catalog of songs, but overall his work doesn’t always seem stylistically coherent,” King added.

It’s been two years since Usher dropped his telling “Looking 4 Myself” album, and to wet fans’ appetites for his unreleased eighth album “UR” he’s launched a North American tour.

But despite teaming up with popular rappers Juicy J and Nicki Minaj, his latest single “I Don’t Mind” is stuck in 54th place on the Hot 100 charts after debuting three weeks ago.

“Someone like Usher is stuck. He’s got sold-out shows, put out four or five songs that are in between a Chris Brown and Trey Songz style, when what we want is something more personal from him.

“I actually think male R&B stars are trying to figure out where they stand, especially R&B singers over 35 because you’re seeing one specific type of R&B artist, one particular image,” Kennedy continued.

And that one image is packaged as Black male R&B singer Trey Songz, a singer whose sixth album “Trigga” debuted at No. 1 on Billboard 200 chart.

“Trey Songz has zero endorsements…he did the horror movie (“Texas Chainsaw Massacre 3D”) and his album was No. 1. The movie was also successful. Even though it’s great, it’s not what most R&B, pop artists are getting,” Kennedy explained.

Pharrell Williams may be the exception to the rule for Black male R&B singers with the enormous crossover hit “Happy.”

He’s the latest chair-twirling music mentor on “The Voice,” he launched his second studio album “G I R L” in eight years that birthed a fragrance by the same name, and used “Happy” to challenge fans to express their joy in a 24-hour music video.

The marketing blitz aside, Los Angeles-based singer, songwriter and music producer Kashif pinpointed why “Happy” has been so addicting, while other song offerings from Black male R&B singers have come and gone.

“In 20 or 30 years from now will people be digging in the crates for a Chris Brown song? The answer is no because they have no timelessness. On the other hand, Williams’ ‘Happy’ has become an instant classic because it appeals to man’s most basic desire… to be happy. It’s more intelligent. You listen to those handclaps in ‘Happy’ and you’re going to church. It’s a cultural awareness,” Kashif explained

A style of music Kashif plans to highlight in a 10-part documentary on the history of R&B music. The documentary, with an expected release date of 2016, covers the emergence of the genre in the 1940s up until present day R&B singers.

The exclusive Black male R&B singers club is one Corey Kelly, of Cherry Hill, N.J., is striving to be a part of.

The choirboy turned R&B crooner envisions a thriving career as an R&B performer, despite the genre’s murky climate of uncertainty and limited exposure.

Kelly is wise enough to know upcoming Black male R&B singers that want to follow in the footsteps of Williams and John Legend need a following before they get a record deal.

“These days you’re not going to make it without social media. Your music and social media go hand-in-hand. If you have aspirations to be signed by a record label they won’t look at you if you don’t have followers already,” Kelly said.

And lately, record company’s attention span for Black male R&B singers has waned along with consumers’ interest in buying albums.

The music industry’s revamp to digital streaming platforms has left more than Taylor Swift shortchanged. Black male R&B singer Aloe Blacc reportedly made less than $4,000 for co-writing and singing on Avicii’s “Wake Me Up,” which is the most streamed song in Spotify history.

To make up for the loss, Black male R&B singers align with corporate sponsors to invest in what the record company’s won’t provide; hence, Usher’s dance-off with Honey Nut Cheerios bee in a commercial.

Kelly fears the likely possibility of compromising his music in order to build a mainstream brand.

“I think that would definitely be a fear.  For the machine (record labels) to force me to do something I’m not passionate about,” Kelly revealed. “I would have to remind myself what I’m passionate about and convey that. I know what my fans would actually want.”

Williams wants more of Legend’s “All of Me” and Miguel’s rich, sultry “Adorn,” songs that are too few and far between but are successful enough to know Black male R&B singers still have a pulse.

“What Miguel’s done particularly with that album, he had a nice mix of traditional and contemporary,” Williams said. “Maybe a blueprint for artists to follow.”

“I think what (Tank) was trying to say is you hear Timberlake, Thicke, Sam Smith, they’re doing Black R&B music. Black artists (who) have left that sound to get crossover appeal…need to get back to doing music that’s soulful. You can’t abandon your roots,” Williams said.

King said Black male R&B singers’ musical roots haven’t been neglected, but rather being nourished in other areas, until now.

“It’s interesting that Pharrell is having this second wind in his career because back in the late 1990s and especially in 2000s, he along with producers like Timbaland and Missy (Elliott) helped change the sound of mainstream pop. They staged a kind of urban assault on pop music where you had singers like Britney Spears and Justin Timberlake basically performing Black music styles,” King explained. “So now it’s a full circle moment where producers like Pharrell, who created the sound that’s dominating mainstream radio, have planted their flags to say, I’m still here, creating music, creating hits.”