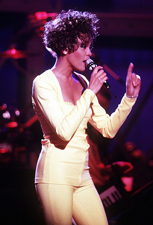 In 1998, Whitney Houston released “My Love is Your Love,” her first true studio album since “I’m Your Baby Tonight” in 1990.

The 1990s represented a golden age for urban music.

In the early 1990s, R&B musicians produced some of the best music the genre has ever seen from artists like Mary J. Blige, Jodeci, Boyz II Men, SWV, TLC, Silk and Shai.

And although the late 1980s began the golden age for hip-hop in the eyes of many critics, the early 1990s saw the commercialization of hardcore reality rap, or gangsta rap as the critics dubbed it at the time.

However, by the late 1990s, urban artists had turned pop music on its head from a creative standpoint to the business aspect.

Not only did rap and R&B artists dominate the pop charts, they also dominated in the boardroom with many artists like Master P, Jay-Z, Dr. Dre, Birdman and R. Kelly starting music imprints that became major forces in the entertainment industry.

The year 1998 became a very profitable year for urban music and a time of peaceful prosperity after the tragic deaths of 2Pac in 1996 and The Notorious B.I.G. in 1997.

Urban artists became more interested in making money and hit records than they were with making beef with rival artists.

In honor of the 20th anniversary of some of the most revered R&B and hip-hop albums of all time, RegalMag.com looks back at the top 10 urban albums of 1998.

“The Miseducation of Lauryn Hill” by Lauryn Hill—What happened to Ms. Lauryn Hill? Sure, she still performs live, but fans still await the studio follow-up to her 1998 debut album. “The Miseducation of Lauryn Hill” sold eight million copies in the United States alone. The album produced three gold singles (“Doo Wop (That Thing),” “Ex-Factor,” and “Everything is Everything”). “Doo Wop (That Thing)” reached number one on the pop charts as well. Hill received 10 Grammy Award nominations in 1999, winning five including Best New Artist.

“400 Degreez” by Juvenile—If you lived in Louisiana in 1998, you could not escape “400 Degreez” especially in the clubs of New Orleans and Baton Rouge, La. Juvenile probably became the first rapper to have a hit song by just asking questions on every bar with the classic song, “Ha.” Far from a one hit wonder, Juvenile’s most iconic song might just be the party anthem, “Back That Thang Up.” However, what set Juvenile and his Cash Money Records brethren apart from artists from Master P’s No Limit camp was that Cash Money’s music was authentically New Orleans, with no compromise. The slang, the bounce music beats mixed with the reality of street life is the epitome of the “Crescent City.”

“Vol. 2…Hard Knock Life” by Jay Z—Legendary status had already blessed Jay-Z before his third album, “Hard Knock Life.” His first album “Reasonable Doubt” remains one of the best debuts in rap history, but “Hard Knock Life” made Jigga a pop star without compromising his street credibility. The beats, many produced by Timbaland of Virginia, gave “Hov” the best of both worlds, which was East Coast lyricism with Dirty South music. Furthermore, anyone that can make a hit song out of a sample from the movie “Annie” is beyond brilliant as he did with the title cut.

It’s Dark and Hell is Hot” by DMX—Yonkers, N.Y. native DMX finally got his big break in hip-hop at an older age than some of his competitors. And that hunger to finally make it was apparent on his debut album, “It’s Dark and Hell is Hot.” The pain and anguish of life is apparent and believable with every verse that X spits. And while hip-hop had become very flashy and colorful thanks to the talent at Bad Boy Records like Mase and Puff Daddy, DMX wanted to become the anti Puff and take it back to the streets. He did just that with classics like “Get At Me Dog” and “Ruff Ryders’ Anthem.”

“Embrya” by Maxwell—Maxwell’s second album, “Embrya” earned him comparisons with the late, great Marvin Gaye. The album went platinum and produced classics like “Luxury: Cococure” and “Matrimony: Maybe You.” While the album did not receive as many favorable reviews as his debut, “Maxwell’s Urban Hang Suite,” the album saw him add to the neosoul phenomenon sweeping the urban music landscape at the time. The album peaked at number two on the Billboard R&B charts and number three on the pop charts. “Luxury: Cococure” reached number 16 on the R&B charts, while “Matrimony: Maybe You” reached number 79 on the R&B charts.

“Aquemini” by Outkast—The word classic and Atlanta legends Outkast go hand-in-hand. But even though “Southernplayalisticadillacmusik” and “ATLiens” established the dup as hip-hop royalty, “Aquemini” solidified their spot on the throne. The album went double platinum with over two million album sold. Singles “Rosa Parks” and “Da Art of Story Tellin’ (Pt. 1)” with Slick Rick reached numbers 19 and 67 on the Billboard R&B charts, respectively.

“Still Standing” by Goodie Mob—While Atlanta’s Outkast became the most commercially successful of the hip-hop acts signed to LaFace Records, their counterparts Goodie Mob became the conscious crusaders of the crew with songs about Black culture and politics. While their debut album “Soul Food” set the precedent for Goodie Mob, “Still Standing” added to their stellar reputation as artists. The song “Black Ice” featuring Outkast still jams to this day, as does “They Don’t Dance No Mo.” Like Outkast, with producers Organized Noize providing the beats, Goodie Mob could do no wrong.

“Enter the Dru” by Dru Hill—In 1996, Dru Hill established itself as the heir apparent to the throne vacated by Jodeci and Boyz II Men for R&B quartets.  However, 1998 saw them solidify that spot with the strong vocals from Sisqo and the crew from Baltimore. “Enter the Dru” went double platinum with over two million albums sold. And like their self-titled debut, the singles from their second album became R&B standards. Singles included “How Deep is Your Love, their cover of “The Love We Had (Stays on My Mind),” “These are the Times,” “You are Everything” and the anthem “Beauty.”

“My Love is Your Love” by Whitney Houston—By 1998, Whitney Houston had become just as well known for the tabloids as making hit records. Sure, she had hit songs on soundtracks like “Waiting to Exhale,” “The Preacher’s Wife” and the classic, “The Bodyguard,” but it had been many years since she had put out a true Houston studio album. But when she did drop the studio album “My Love is Your Love,” the old Houston had returned, selling 10 million records worldwide. With help from writers like Rodney Jerkins and Wyclef Jean, Houston dropped hit singles like “It’s Not Right, But It’s Okay,” the title song and “Heartbreak Hotel” with Kelly Price and Faith Evans. In addition, R&B and pop fans finally got a Houston duet with Mariah Carey on the song “When You Believe.”

“Lost” by Eightball—By 1998, members of the Memphis, Tenn. duo Eightball and M.J.G. had both released their first solo albums. While the duo, which called Houston-based label Suave House home, made a name for themselves by spitting rhymes about pimping, crime and drugs, “Lost” by Eightball stood out because of its raw look at ghetto life and its introspection. Songs like “My Homeboy’s Girlfriend” had lyrics that painted a picture so vividly that it sounded like a short film. At a time that saw fractions in the hip-hop community with the East Coast vs. West Coast rap beef from previous years, “Lost” included features from rappers from all over the country like Redman, Spice-1, Goodie Mob, Master P and Bun B. Despite the bangers like “Pure Uncut” and “Ball and Bun,” the vulnerability shown on songs like the title cut give the album its true essence.