From Nipsey Hussle to 2Pac: Honoring Lost Legends of Hip-Hop 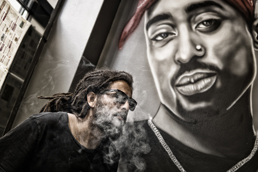 Murals honoring the memory of some of the greatest rappers have become too commonplace in the hip-hop community.

With the tragic murder of rapper Nipsey Hussle in Los Angles on March 31, hip-hop fans have flooded their social media timelines once again with Rest In Peace and other tributes.

But the tragedies in hop-hop seem to be never-ending.

After the murders of 2Pac and The Notorious B.I.G. in 1996 and 1997, respectively, some of the best and the brightest have gotten taken down before they could truly reach their potential.

For rappers like Nipsey and 2Pac, their impact extended far beyond the recording booth because they often used their fame to change the system and the African-American community for the better.

What people will continually ponder is what permanent impact would some of these rappers made if they had not lost their lives to senseless violence?

Many believe that 2Pac would have gotten involved with politics.

Nipsey began buying back his old neighborhood, providing jobs for the community and knowledge for the people.

Nevertheless, now Nipsey resides in “Thugz Mansion” to quote a song by 2Pac.

And unfortunately, “Thugz Mansion” is filled to capacity with rap legends taken too soon because of gun violence.

RegalMag.com looks back at some of the legends of hip-hop who lost their lives to street violence.

2Pac—Tupac Shakur might be the most beloved and revered rapper of all time. Many do not consider him the greatest lyricist. However, his lyrical content and passion remains second to none. Pac spoke to the have-nots and represented the revolution. But what did people expect from the son of a Black Panther? Although Pac flirted with violent and misogynistic themes in his music, he also released positive classics like “Keep Ya Head Up,” “Brenda’s Got a Baby” and “Unconditional Love.”

The Notorious B.I.G.—Biggie Smalls is a constant on the list of best emcees to ever bless the mic. The rise to stardom for Biggie remains the stuff of legends. Big made a name for himself free styling and battling on Fulton Street in Brooklyn, N.Y. He eventually made a demo tape for Mister Cee. That talent apparent on the demo made its way to The Source Magazine where Biggie earned the coveted spot on the Unsigned Hype List. That led to him meeting Sean “Puffy” Combs who made Big the flagship artist at his new imprint, Bad Boy Entertainment.

Big L—Big L has to be one of the biggest what-ifs in hip-hop history. Just like Sam Cooke died before “A Change is Gonna Come” dropped, Big L died before his song “Ebonics” dropped. Along with “I Miss H.E.R.” by Common, “Ebonics” has to be one of the most creative hip-hop songs ever produced. Before old folks could Google slang words to discover their meaning, Big L broke down almost every slang term that hip-hop heads used in New York. His death is so tragic because haters wanted to hurt Big L’s brother so badly that they killed Big L instead just to get to his brother, emotionally.

Nipsey Hussle—Nipsey Hussle epitomized the dream that Tupac Shakur had for the hip-hop community and the inner city. Shakur wanted to use the platform of hip-hop to make positive change in the African-American community. Nipsey put that plan into motion and succeeded in such a way that he has achieved legendary status in Los Angeles and beyond. Nipsey used his rhymes and his influence to change the mindset of many in the urban community. Nipsey had more interest in owning real estate than in owning jewelry and cars. He provided jobs for people in South Central Los Angeles. He provided STEM training for teenagers from the community. Nipsey defined the word legendary. RIP Nip!

Fat Pat—Fat Pat did not live to see his ghetto dreams come true. However, if you lived in Houston around 1998 you could not escape the classic song, “Tops Drop.” Taking a sample from a Yarbrough & Peoples classic called “Don’t Stop the Music,” the Houston emcee created a Dirty South rap classic that still gets people on the dance floor in H-Town over 20 years later. Fat Pat did not live long enough to benefit from the Houston rap explosion of 2005. But those rappers who blew up nationally in 2005 credit him for his impact on Screwston, Texas.

Soulja Slim—Whether a rapper represented Master P’s No Limit Records or Birdman’s Cash Money Records, the love and respect for Soulja Slim appeared universal amongst New Orleans rappers. Unfortunately, love from hip-hop fans can turn to hate from the people that never escaped the environment that certain rappers come from. Soulja Slim lost his life before the biggest hit of his career, “Slow Motion” with Juvenile. Although the album came out on Juvenile’s album “Juve the Great” via Cash Money Records, “Slow Motion” was actually Soulja Slim’s song. However, he knew releasing the album on a major label would give it the exposure it needed to become a classic. It did become a classic and it forever immortalized the New Orleans emcee.

Jam Master Jay—A time existed in the history of hip-hop when the deejay held a position more prominent than the emcee. Groups like Run-DMC epitomized that reality. When Jam Master Jay fell victim to senseless violence, Rev. Run and DMC retired as a rap group. The two emcees from Hollis Queens, N.Y., could not imagine going on stage without their “band.” And that’s exactly what Jam Master Jay represented for Run-DMC, a one-man band. Jay gave the group its sound. He gave the group their look and image. And he gave the group its soul. Although Jay reached his greatness as an artist, he did not get the chance to reach his full peak as the CEO of JMJ Records.