Why ‘Victory’ Is The Jacksons’ Best Album 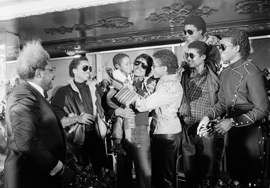 Why ‘Victory” Was Best Album by The Jacksons

This statement will offend all of the Michael Jackson fanatics, but The Jacksons’ 1984 album “Victory” is the best of their five studio albums.

Sure, “Victory” did not feature Michael enough on lead vocals, but that makes it the most endearing of their work on Epic Records from 1976 to 1989.

Although Michael had taken over the universe with the “Thriller” album, the reunion album featuring all six Jackson brothers allowed each brother to shine and showcase their immense talent.

The four previous albums under The Jacksons’ moniker simply gave Michael the spotlight like his fantastic solo projects.

That is why “Victory” is the best album by The Jacksons and not other fan favorites like “Destiny” and “Triumph.”

While classic Jacksons songs like “Shake Your Body (Down to the Ground),” ”Lovely One” and “Can You Feel It” all exist because of the brothers’ great writing ability, “Victory” let every member craft their own solo songs that showcase how brilliant the brothers had become in the recording studio.

“Victory” will remain historical because it is the only album to feature all six Jackson brothers as official members of the group.

RegalMag.com looks back on the eight tracks that made the “Victory” album and what made each one so victorious.

“Torture”—The magic of the Jackson Five revolved around the chemistry between Michael and Jermaine Jackson.  The song “Torture” became the first duet between the two Jackson Five lead singers on a group studio album since “Moving Violation.”  Although Jackie Jackson initially planned to sing it with Michael because of Jermaine’s contractual obligations to Arista Records, the Jackie-written song became the last song by the brothers to reach the Billboard Top 40.  Randy assisted by playing keyboards, synthesizers and percussion.

“Wait”—This jam also written by Jackie along with David Paich, gave the eldest Jackson brother a chance to shine without his signature falsetto from the Jackson 5 days.  “Wait” is an up-tempo danceable groove in which Jackie lets a lady know he cannot wait 100 years for her.  Jackie sings lead vocals but the song really kicks into high gear with ad-libs by Michael and Jermaine.

“One More Chance”—Youngest brother Randy Jackson is the most unsung of all of the Jackson brothers.  He writes, plays multiple instruments and is an underrated vocalist.  “One More Chance” is a slow groove that allows Randy to show off his vocal ability for the first time by himself on a Jacksons record.  On this song, Randy wrote and produced the track and played keyboards, synthesizers and drum programming.

“Be Not Always”—Mystery has always shrouded the song “Be Not Always.”  Michael Jackson stripped down this song to just strings and his vocals, but what in the world is the meaning of the song?  Since 1984, fans have debated the true meaning with publications like Jet Magazine even asking the King of Pop about the significance of the track.  The lyrics suggest a socially conscious message from a pop star that had just begun to use his platform to speak on issues of true concern.

“State of Shock”—The lead single from “Victory,” a collaboration with Mick Jagger from the Rolling Stones represents Michael at his best.  Initially planned for the “Thriller” album and to feature Freddie Mercury of rock group Queen, Michael decided to record it with Jagger, with his brothers providing background vocals.

“We Can Change the World”—Before Tito Jackson blessed the universe with his 2016 solo debut “Tito Time,” this track off of “Victory” was one of the only times fans could really hear his voice.  The second eldest Jackson brother had always viewed himself as the quiet Jackson and the guitarist of the group but “We Can Change the World” allowed him to become lead vocalist for a change.  The track stood out because it addressed problems and obstacles that people of different backgrounds experience trying to co-exist on Earth and preached that only via God could souls experience salvation from their errors.

“The Hurt”—While most of the tracks from “Victory” were actually solo songs by group members, “The Hurt” was more a collaborative effort.  Michael and Randy Jackson wrote the song with Randy handling lead vocals with his falsetto.  “The Hurt” is the only song on “Victory” that the entire Jacksons group produced along with David Paich and Steve Porcaro.  The lyrics on the song deal with the hurt experienced because of an unfaithful significant other whom one does not still want to leave.  All six members of the Jacksons sang background vocals.  Additionally, Randy Jackson played synthesizers and keyboards on the song.

“Body”—Sure Marlon Jackson had brief moments to shine with the Jackson 5, singing Jermaine’s parts live when the bassist went solo on such songs as “I Am Love,” but the song he wrote and produced called “Body” became his first real shot as a lead vocalist.  The video became a mainstay on BET’s “Video Soul” and the success of the song probably led to Marlon’s solo deal with Columbia Records, which resulted in his only solo album, “Baby Tonight” in 1987.