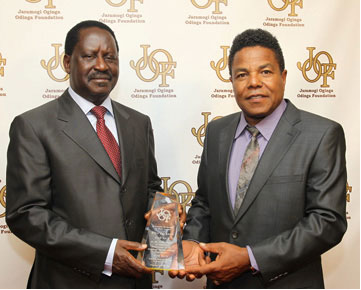 What comes to mind when you think of Tito Jackson?  Is it Rock and Roll Hall of Famer or is it famed guitarist for the iconic boy band the Jackson Five?

All of these adjectives describe the legendary musician, but they do not fully represent Tito Jackson’s impact on the music world and the world around him.  On April 16, Tito Jackson was named U.S. Ambassador to Kenya for the Jaramogi Odinga Odinga Foundation (J.O.O.F.) as well as an honorary citizen to the African nation.

Kenyan Prime Minister Raila Amolo Odinga made his first trip to Los Angeles to honor the musician and launch the J.O.O.F. in the United States.

“I am incredibly honored and humbled to be named J.O.O.F. ambassador and honorary citizen of Kenya by Prime Minister Odinga,” Tito Jackson said.  “I look forward to tackling the important issues of health and education in this east African country.  Kenya is battling a number of life-threatening diseases including HIV/AIDS, which has always been an important cause for my family and me.  Through a combination of education and resources these health issues can be prevented.  There is a lot of work to be done and I can’t think of a better organization than J.O.O.F. to spearhead the effort, so I am extremely proud and grateful to be a part of this lifesaving foundation.”

In his role as ambassador, Tito Jackson will work to bring global awareness to the organization and its initiatives in Kenya.  He will also perform at an annual concert, with his band, to raise funds for health initiatives and Kenyan children.

Jackson and the band are putting the finishing touches on his solo debut entitled “So Far, So Good.”  The lead single, “We Made It,” is an upbeat anthem of perseverance, which is a perfect for the Kenyan initiative and is receiving significant radio time on such outlets as “The Tom Joyner Morning Show.”

The Jackson family is no stranger to lending a helping hand to causes relevant to the people of Africa.  Brother Marlon is erecting a museum that will preserve the historical significance of the Middle Passage in Nigeria and Jermaine recently performed for the people of Gambia.  Now Tito Jackson can add his name to the list of Jacksons committed to philanthropic work, which also includes Michael raising money for famine relief in Ethiopia with the classic song, “We are the World.”

“We are absolutely delighted to honor Tito with this prestigious ambassadorship,” said J.O.O.F. Board of Trustees member and television personality April Sutton.  “We couldn’t think of a better individual to represent global unity and global awareness for the children of Kenya, and we look forward to what he will be able to contribute to J.O.O.F as a world-class entertainer, humanitarian and now an official ambassador.”

So whether you recognize Tito Jackson as a musician or a member of entertainment royalty, you must also recognize him and his family for representing more than just music.  They always represented what music could do to make the world a better place.  We salute you Tito Jackson!