The Late, Great Billie Holiday In Her Own Words 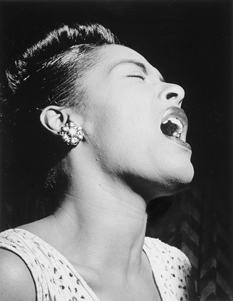 The legendary Billie Holiday is still regarded as one of the best jazz singers of all time.

The jazz great that became affectionately known as “Lady Day” never really had an easy day in her life.

But as her classic song said, “Mama may have, Papa may have, but God bless the child that’s got his own.”

Eleanora Fagan, better known as Billie Holiday, survived a poor and rough life to make it is as one of the most revered jazz singers of all time.

However, her life tragically ceased on July 17, 1959 after a successful career and a battle with heroin addiction.

But before her untimely death, Holiday beat the odds to become one of the most iconic singers of all time.

Holiday’s mother Sadie was only 13 years old at the time of her birth.

Her father was a successful jazz musician, but his involvement in her life was not frequent.

She spent time in a school for troubled youth.

She survived a rape.

She survived the Great Depression and poverty.

She worked in brothels.

And she ultimately topped the world of jazz music.

So in honor of Billie Holiday’s life and the 58th anniversary of her death, RegalMag.com staff writer Golden Herring has edited some of her most famous quotes, lyrics and interviews in order to let the late jazz great tell her own story.

RegalMag.com also recommends her autobiography and biopic starring Diana Ross, both entitled “Lady Sings the Blues,” for more information on her remarkable life and career.

So without further adieu, RegalMag.com turns over the microphone to Ms. Billie Holiday.

“I never had a chance to play with dolls like other kids.  I started working when I was six years old.”—(famous quote from Billie Holiday)

“[But] singing songs…is no more work than sitting down and eating Chinese roast duck, and I love roast duck.”—(famous quote from Billie Holiday)

“[Because] if I’m going to sing like someone else, then I don’t need to sing at all.”—(famous quote from Billie Holiday)

“[However], I think I copied my style from Louis Armstrong.  Because—I always like the big volume and the big sound that Bessie Smith got when she sang.

“But—uh—when I was quite young I heard a record Louis Armstrong made called ‘The West End Blues;’ and—he doesn’t say any words, you know?—and I thought, ‘This is wonderful,’ you know?

“And I liked the feeling he got from it.  So I wanted Louis Armstrong’s feeling and I wanted the big volume that Bessie Smith got.  But I found it didn’t work with me, because I didn’t have a big voice, you know?

“To me, jazz is good music and a good feeling.  And I like to say that everybody can’t play jazz.  No one person originated.  No one person created it.  You just have to have it in you…

“I [actually] don’t like many of my records though because there’s always something I should’ve did.  Some note I should’ve bent.  Some word I should’ve said.  I should’ve slowed down.  I went faster.  But I like other people’s records: Duke Ellington; I’m crazy about Ella (Fitzgerald); Louis Armstrong.  They’re my favorite…”—(unaired 1956 radio interview from KNX in Los Angeles)

“[Despite my success] if I don’t have friends, then I ain’t nothing.”—(famous quote from Billie Holiday)

“Money, you’ve got lots of friends.  They’re crowding around the door.  But when you’re gone and spending ends they don’t come no more.”—(famous quote from Billie Holiday)

“[In my spare time] I tried to learn to play golf.  My husband is a golf fiend.  But I like the other thing he likes and that’s fishing.”—(unaired 1956 radio interview from KNX in Los Angeles)

“[But as far as drug rumors], I never hurt nobody but myself and that’s nobody’s business but my own.”—(famous quote from Billie Holiday)

“[However], I’m always making a comeback, but nobody ever tells me where I’ve been.”—(famous quote from Billie Holiday)

Unfortunately before that comeback, Holiday died on July 17, 1959.

According to a New York Times article on July 18, 1959, “Billie Holiday, famed jazz singer, died yesterday in Metropolitan Hospital.  Her age was 44.  The immediate cause of death was given as congestion of the lungs complicated by heart failure…

“She is survived by her husband, Louis McKay.  A previous marriage, to Joe Guy, a trumpet player, ended in divorce.”