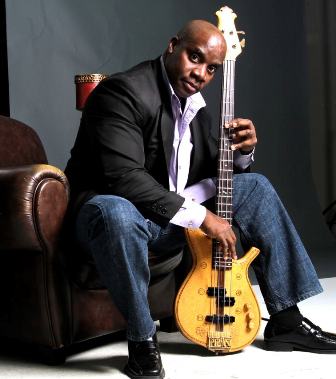 Bassist Russel Blake is attempting to increase the number of vocal men against domestic violence (Photo courtesy of Blake).

“We are married now.  May 27th was my 39th anniversary,” jazz musician Russel Blake reveals to Regal.

But he’s not referring to a romance made up of candlelit dinners and long stemmed roses; it’s his ongoing love affair with a curvy, four-string electric bass guitar that has had his hands working overtime for three decades.

“The bass has taken me to 65 countries and five continents,” says Blake, 51, who started playing on his 12th birthday when his father had a vision that his two sons would play bass professionally (Blake’s older brother Alex is also a renowned jazz bassist).

And beyond the limitations of what a four-string electric bass could do, in 1994, Blake developed a novel method, the Melodious-Chordal Technique, which blends harmony, rhythm and melody simultaneously to his bass playing.

So far the technique has helped Blake hold over 432 pieces within his repertoire including Beethoven, Mozart, Stevie Wonder and Elton John.

“I asked God to divinely guide me to play the four string electric bass as no man has ever played it before,” recalls Blake. “I studied 10 hours a day, learning how to combine and perform melody, harmony and rhythmic accompaniment simultaneously.

“I then began establishing a diverse repertoire of music from all genres, showcasing the best known songs from the innovators in each genre.”

“[It’s] four CDs with me performing, no overdubs, no special effects,” says Blake.

It’s not necessary when you have artists Sonny Rollins and South African jazz trumpeter Hugh Masekela collaborating with you.

However, he says the best lessons learned from “jazz giants” like these weren’t found on sheet music.

“Dizzy [Gillespie] was like a favorite uncle. Dizzy and Louie Armstrong [were] cultural ambassadors to foster goodwill in this country; [their music] helped soften diplomatic relations. It showed how powerful jazz music is; music opens door to healing,” says Blake.

And now Blake hopes to open doors to healing the hearts of women as he galvanizes men against domestic violence.

“Oftentimes it takes a poison to kill a poison,” says Blake, an advisory board member of Linda’s Voice, a nonprofit aimed at women working to end domestic violence. “Among domestic violence advocates, women are more visibly prevalent. There needs to be more visibility of men on this issue to both garner public support and effectively convey that domestic violence is wrong, especially in the Black community.”

Myra Spearman, founder and executive director of the National Domestic Violence Registry (NDVR)—a nonprofit modeled after the sex offender database (through the organization’s website men and women can search if their partner has a history of domestic violence or related crimes)—wanted Blake to partner with the NDVR because of his commitment to the issue and to attract more men against domestic violence.

Blake says the most effective way to get men against domestic violence is to have more male support.

“Female advocates are very effective, (but) males can be that much more effective,” says Blake, who penned As Men We Can Do Better: 12 Principles of Effective Change against Intimate Partner Violence (tentatively scheduled for release later this year.) “A man can reach a man.”

Otherwise the vicious cycle of domestic disputes will recur, only it won’t be the father’s hand raised against a female, it will be his son’s.

According to the National Coalition against Domestic Violence, boys who witness domestic violence are twice as likely to abuse their own partners and children when they become adults.

Blake believes the only way to change that statistic is for more men that are against domestic violence to step out of the shadows and raise awareness, specifically high profile celebrities that boys are influenced by.

“The most frustrating thing is getting celebrities to sign on as domestic violence advocates,” Blake reveals. “[They’re] afraid they will be perceived as victims or past abusers. They don’t want to be stigmatized.”

While Blake admits the media attention from the domestic violence disputes between R&B stars Chris Brown and Rihanna and more recently between former NFL player Chad “Ochocinco” Johnson and reality star Evelyn Lozada can raise awareness for the issue, it fails to shine a light on how women and men against domestic violence can find solutions.

“Ochocinco and Lozada have a fabricated love; two famous people getting involved in nonsense. How many women were beat down that same week or since that time? Why is it that (the media) don’t camp outside a hospital and talk to women about their domestic dispute?” rants Blake. “The ramifications these incidents have on the community…we have real families and children being affected by this issue.”

All the more reason to view domestic violence as a serious epidemic plaguing our communities says Blake, who draws similarities to a tumor left untreated.

“Men shouldn’t wait until he makes his wife or daughter a victim of his own hands,” says Blake. “We try to find justification for why we’re beating our women.”

However, the justification for men to intervene in domestic disputes is very rare.

“Black men instinctively want to shun (domestic violence), it’s repugnant to them,” explains Blake. “[Men] don’t want to be associated with it.”

But he behooves men against domestic violence to be an interventionist.

He advises men against domestic violence to offer education, counseling and a nonjudgmental ear to victims.

Blake’s rallying cries aren’t the result of a childhood of domestic disputes; it’s quite the opposite where his parents were both loving and supportive to each other and his two siblings.

Blake’s catalyst to become one of the few vocal men against domestic violence is testimonies he’s heard from women that experienced it firsthand.

And his ultimate goal is to have both women and men against domestic violence stand together as a community and develop solutions to end it.

“[When I was younger we] never allowed anyone in our community to be abused,” says Blake, a Brooklyn, N.Y. native and current Los Angeles resident. “The dynamic we see now (is) every woman for herself is foreign. It shows we may be decaying as a community. Too many are about uprooting women, we need to stand behind her, protect her, and let her know she’s not going through this on her own.”

And the best way to reach anyone is through the power of song.

Blake hopes his love of music will translate to a rallying call to help women affected by domestic violence.

He’s working with NDVR to develop concerts where proceeds will go to the organization, and working on a single called “Cry Freedom” about domestic violence.

“Not too many artists will sound a rallying cry against domestic violence,” says Blake. “But, I am.”

Goode-Henry is a contributing writer for Regal Magazine, a publication dedicated to the African American community