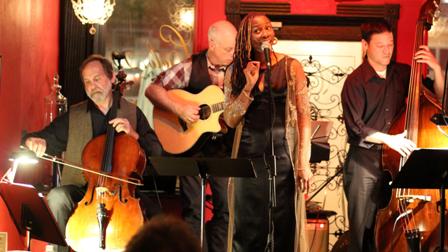 Jacqui Sutton and the Frontier Jazz Orchestra have created their own sound called “JazzGrassChic,” which blends the sounds of jazz, bluegrass, R&B and classical music (Photo courtesy of Medley, Inc.).

Jazz, blues, rock and roll, rhythm and blues as well as hip-hop are all established Black musical art forms.  But is bluegrass?

When music fans think of bluegrass artists they usually think of country ho-downs and not music that comes from people of color, but is that assumption necessarily accurate?

“I think ‘our people’ have a negative view of the predominant instrument in bluegrass, which is the banjo,” jazz-bluegrass singer Jacqui Sutton told Regal Magazine.  “I think there’s a plantation holdover feel; and couple that with the fact that White musicians have lovingly embraced the instrument, and I think there’s a cultural resistance to playing or listening to what might be thought of as ‘hillbilly’ music.  The reality is that the prototype for the banjo is African.”

Her two favorite female vocalists are jazz great Billie Holiday and the iconic Dolly Parton.  Sutton named her debut CD “Billie and Dolly,” which gave fans a glimpse of her unique style of blending various genres of music into one pot to form a delicious dish.

Sutton, whose favorite instrument is the banjo, has found a way to marry the sounds of jazz and bluegrass music, along with classical and R&B, forming her own unique genre of music, which she calls “JazzGrassChic.”

“My fusion of (bluegrass and jazz) comes after many years of listening to and loving both styles in parallel,” said Sutton.  “I started out as a jazz singer…but about the same time in my life, I was introduced to bluegrass through contra dancing.  The live musicians would accompany the dancers, and I just loved hearing the banjo, mandolin, piano, violin live while I was dosey-doe-ing around the dance floor.”

Despite the true artistry of jazz and bluegrass artists like Sutton and her band the Frontier Jazz Orchestra, the modern music industry is not always receptive to music that goes against the grain.  That dilemma makes it hard for jazz-bluegrass artists to have a voice on modern radio.

“Some jazz stations have a hard time fitting it in because it’s ‘uncategorizable,’ although the jazz reviewers have responded very strongly to it,” Sutton said.  “The Roots stations are having an even tougher time with it because (of) the jazz influence.”

Furthermore, urban music over the last 20 years has distanced itself from live instrumentation on records, which can also have an effect on musicians from jazz artists to bluegrass artists.

“I am disheartened by the lack of enthusiasm for not only instrumental technique, but for vocal excellence as well,” Sutton explained.  “I appreciate a lot about the rhythmic focus in contemporary music—it takes major chops to rap with the kind of speed and articulation that a lot of musicians achieve.  But after awhile, I want to hear a melodic line; I want to hear a horn or a voice or a piano arc through the air with a line that stops my heart.”

Luckily for Sutton, she found true musicians, the Frontier Jazz Orchestra, that allow her to blend the style of jazz artists and bluegrass artists seamlessly into her own self-created genre.

“I was extremely fortunate to encounter musicians who were not only highly-skilled in either jazz or classical arenas, but who trusted me enough to experiment with the stylistic fusion.  They are also ‘generous’ with their talents, and collaborate easily with me. Openness is key to working in the Frontier Jazz style,” said Sutton.

On their latest CD entitled “Notes From the Frontier,” Sutton and her band delve into cover music such as the Nat King Cole classic “Nature Boy.”

However, for their upcoming third CD, which will be entitled “American Anthem,” the jazz-bluegrass artists will produce original compositions that delve into the issues of politics, class and sexuality.

“I started thinking about the segments of American society that seem ‘left out’ of the National Anthem paradigm—which to me, while a stirring and patriotic song, doesn’t seem to really reflect all American experience.  I wanted to explore different Americans and what a specific anthem would sound like,” said Sutton.

In essence, the sounds of jazz-bluegrass artists, as well as rock and roll, blues, R&B and hip-hop artists are the American anthem, and musicians like Sutton and the Frontier Jazz Orchestra are making sure that music lovers appreciate the artistry in all genres.