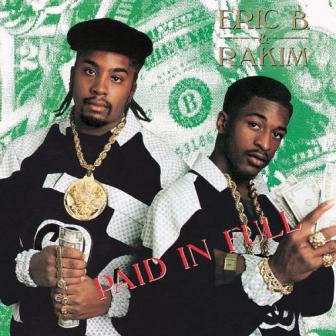 Eric B. and Rakim were literally ahead of their time with their debut album (Photo Credit: Island Records).

According to Lord Tariq and Peter Gunz, “If it wasn’t for the Bronx, this rap s*** probably never would be going on.”

Although some might say that rap started with Georgian James Brown or even the drummers of Africa, hip-hop culture as a whole undoubtedly started on the East Coast.  The b-boys pop-locking, the graffiti artists representing their hood, and the deejays spinning the records all started on the block in the Bronx.

Furthermore, East Coast rappers perfected the art of emceeing from the Cold Crush Brothers to Cassidy; from Big Daddy to Big L; and from The Treacherous Three to Treach from Naughty by Nature.

10) “Get Rich or Die Tryin’” by 50 Cent—When the song “Wanksta” dropped, it symbolized the beginning of the 50 Cent era in hip-hop and the ending of the Ja Rule era.  For an underground legend, hooking up with Dr. Dre and Eminem made it almost impossible not to craft a classic.  So, for beginning a new era in hip-hop, “Get Rich or Die Tryin’” makes our list of top 10 East Coast rap albums.

With Dr. Dre on the beats, songs like “In Da Club,” “If I Can’t” and “Back Down” made 50 a legend after one LP.  What made the Queens, N.Y. born rapper such a genius was like 2Pac he was able to appeal to women and the “fellas” in the streets without compromising his street “cred.”

“21 Questions” was a song that ladies and gentleman could both enjoy and a song like “P.I.M.P.” is the perfect formula for a club banger.

9) “Fear of a Black Planet” by Public Enemy—Not since the days of Marvin Gaye’s “What’s Going On” and Stevie Wonder’s “Fulfillingness’ First Finale” had Black music been able to combine political activism with commercial success.

However, Public Enemy’s “Fear of a Black Planet” dropped at the perfect time, when South African apartheid was the topic of conversation and Malcolm X hats were the latest fashion trend.

The title cut talked about the fear that White fathers had about their daughters possibly hooking up with a Black man.  Flavor Flav’s “911 is a Joke” criticized first responders’ apathy toward the Black community.  “Welcome to the Terrordome” warned Black people that every “brother” wasn’t actually a “brother” and “Pollywanacracka” tackled the taboo subject (at the time) of interracial relationships.

Chuck D’s militancy and Flavor Flav’s comedic antics made for the perfect combination of consciousness and commercialism.  That balance allowed them to attack subjects like Hollywood’s stereotypical portrayal of Black America in “Burn Hollywood Burn,” while virtually cussing out American icons like Elvis Presley and Bruce Wayne in “Fight the Power.”

For having the guts to challenge the American establishment, “Fear of a Black Planet” makes Regal’s list of top 10 East Coast rap albums.

8) “The Score” by Fugees—Ready or not, here they come.  The Fugees represented a breath of fresh air for hip-hop in 1996.  In the midst of the media perpetuated East Coast-West Coast rap rivalry, the music of Wyclef Jean, Pras Michel and Lauryn Hill represented the opposite of beef.  “The Score” represented real music from rap, R&B and dancehall, and for its diversity it has to make Regal’s list of top 10 East Coast rap albums.

Very seldom are two musical geniuses a part of one group.  One probably has to go back to the 1980s when musical geniuses Jimmy Jam and Terry Lewis ended their tenure with The Time to find two in one band.  But ingenuity is the perfect adjective to describe Hill and Jean.

The Fugees perfected covers and samples by remaking The Delfonics’ “Ready or Not,” Roberta Flack’s “Killing Me Softly” and Bob Marley “No Woman, No Cry.”

Furthermore, “Fu-Gee-La,” which sampled “Ooh La La La” by Teena Marie, proved that the trio was real lyricists despite their ability to produce hits in genres other than hip-hop.

“The Score” was such a trendsetter that fans are still hoping to score a real reunion.  Maybe the Fugees can get their “Family Business” together to give us one more classic album.

In the age of guest features in hip-hop, ‘The Blueprint” was unique because Jay Z did not share the spotlight with any rapper except Eminem on “Renegade.”

When the album was released on Sept. 11, 2001, Roc-a-Fella Records ran the rap game, with lyricists like Jay Z and producers like Kanye West and Just Blaze.  The mix was the perfect pop-hop combination with songs like “Izzo,” which sampled “I Want You Back” by the Jackson 5 and the Timbaland produced “Hola’ Hovita.”

Despite Kanye currently having the bigger name, Just Blaze was not to be outdone on “The Blueprint,” producing classics such as “Girls, Girls, Girls” and “Song Cry.”

6) “Life After Death” by The Notorious B.I.G.—Biggie was simply sicker than your average like he proclaimed on the 1997 hit “Hypnotize.”

Unfortunately for B.I.G., he did not live to see his sophomore LP top the charts, but if The Source can give it five mics, it definitely deserves to rank amongst the top 10 East Coast rap albums.

There is no doubt that Biggie Smalls is one of the best wordsmiths ever to grace hip-hop.  He was able to switch up his flow on “Notorious Thugs” featuring Bone-Thugs-n-Harmony, and also give the ladies what they liked on “Lovin’ You Tonight” with R. Kelly.

Although fans criticized this album for being too commercial, he gave the streets what they wanted on hood classics like “What’s Beef?” which epitomized the state of affairs in the rap game in 1997.

5) “Paid in Full” by Eric B. and Rakim—“I’m thinking of a master plan, because ain’t nothing but sweat inside my hands.”

That classic bar from the album’s title cut, summed up Rakim’s struggle to break into the rap game.  By 1987, he had hooked up with producer Eric B. and the duo released a classic that is the epitome of the golden age of hip-hop.

Because the album changed the game forever lyrically, “Paid in Full” comes in at number five on Regal’s list of top 10 East Coast rap albums.

The god M.C. popularized the use of internal rhymes and gave hip-hop heads some of the coldest verses ever.

His verses on songs like “I Ain’t No Joke,” “My Melody,” “I Know You Got Soul” and “Eric B. is President” could still hold their weight against emcees in 2013.

Thanks to Puffy, the album did contain some commercial hits for the radio like “Big Poppa” and “Juicy,” but B.I.G.’s 1994 debut album was virtually about the struggle of young men trying to make it on the means streets of Brooklyn, N.Y.

Songs like “Everyday Struggle” and “Suicidal Thoughts” were dark, but they truly depicted Biggie’s state of mind before the millions.

Furthermore, “Warning” put other rappers on notice that Brooklyn was definitely back in the house.

3) “Enter the Wu-Tang (36 Chambers)” by Wu-Tang Clan—In 1993 the East Coast needed a hip-hop revival and that is just what they got from the slums of Shaolin.

The RZA, the GZA, Ol Dirty Bastard, Inspectah Deck, Raekwon the Chef, U-God, Ghostface Killah and Method Man changed the rules for rap groups forever.  Wu was nine members deep, and as Ice-T said every one of them could rap.

Masterminded by RZA, the group’s sound combined old soul records with audio from classic martial arts films to create a sound all their own.

Raekwon’s opening verse on C.R.E.A.M., “I grew up on the crime side, the New York Times side, staying alive was no jive,” was enough proof that he was one of the coldest emcees ever to bless the mic.  Additionally, Ghostface and Meth were right up there with him when it came to lyrical skills.

They singlehandedly put Staten Island, N.Y. hip-hop on the map when the other boroughs had long established their place in hip-hip history.

For bringing the East Coast back and proving that Staten Island could hang with Brooklyn, the Bronx, Queens and Manhattan, Wu-Tang’s debut album makes Regal’s list of top 10 East coast rap albums.

2) “Illmatic” by Nas—Hands down “One Love” from Nas’ debut “Illmatic” is the epitome of storytelling.  It is basically a “love letter” to his incarcerated friend, letting him know that he still had his back.  His letter informed his friend of what was going on in the neighborhood since he left, and the fact that he had a son now.

His storytelling skills were reminiscent of Slick Rick with more of a street style to it.  Upon the album’s 1994 release, Nasir Jones immediately became one of the most respected lyricists in the game.  Even if one was not from the Queensbridge Projects, Nas’ storytelling made you feel like you were.

Songs like “Life’s a B” showed the mentality of those living life without purpose who believed that life was all about chasing money then dying.  “The World is Yours” gave hip-hop one of its most quotable lines when Nas said, “I’m out for presidents to represent me.”

Nas’ music was unique in that it was basically street and philosophical.  He gave nods to street legends like the Supreme Team on “Memory Lane,” but made listeners think on songs like “It Ain’t Hard to Tell.”

Many argue that it is the best hip-hop album ever, but it comes in at number two on Regal’s top 10 East Coast rap albums.

1) “Reasonable Doubt” by Jay Z—Like Rakim and Nas before him, Jay Z’s 1996 debut LP benefitted from his hunger to make it in the rap game.  Although “Hov” obviously had better selling albums, “Reasonable Doubt” was his “Songs in the Key of Life.”  For being the best work by one of the best rappers ever, it earns Regal’s number one spot on the list of top 10 East Coast rap albums.

Jay was one of the rare rappers who realized that being gangster did not necessarily mean being a thug or hood.  One could be laid back in a business suit, and exude “gangsteerism.”

The song “Feelin’ It” showed how a smooth groove could fit into the arena of “gangsta” rap.

“Can’t Knock the Hustle” with Mary J. Blige was the perfect rap-R&B collaboration and “Brooklyn’s Finest” with Biggie epitomized the friendly rap competition even amongst friends.

“Dead Presidents II” turned Nas’ hot line into a hot song.  Furthermore, the Brooklyn-born emcee was able to get philosophical on “D’Evil,” which talked about how money and power changes people for the worse.

Jay Z should have his own top 10, but for now he has to settle for number one on Regal’s list of top 10 East Coast rap albums.