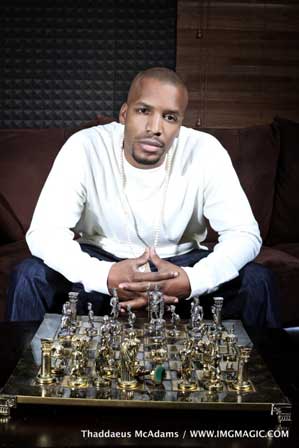 You are not a true Southern hip-hop fan if you did not grow up jamming UGK (Pimp C and Bun B).  From “Something Good” to “International Players Anthem,” UGK let it be known that they did not make hip-hop records, they made country rap tunes.  And those country tales with that Southern drawl, made everyone below the Mason Dixon Line proud to be country.

Growing up in Houston, Cory Mo was no different than anyone else because UGK constantly banged from his speakers.  But unlike most hip-hop heads, Cory’s brother Mike Mo became friends with UGK while attending Lamar University in Beaumont, Texas.  And unlike most, Cory Mo had a passion for rapping, which led to producing beats because he could not afford to pay for beats, which eventually led him to become one of the of the most sought after producers in the South, and a member of the UGK family.

“Really, it’s just a blessing because I had no idea that I was gonna be doing a lot of the stuff that I did with UGK,” explained Cory Mo.  “I didn’t really just go into it like ‘man, I wanna work with UGK.’  I was just doing stuff, just making beats and trying to figure out the game myself… (But) me working with UGK was just off the chain.  I couldn’t believe it.”

However, anyone who knows Cory Mo’s production talents can believe it and after the usual setbacks that any artist faces, he has definitely figured out the game.  From early obstacles like losing “Freestyle Friday” on “106 and Park” to making a name for himself as an independent businessman, Cory Mo has gone on to produce many country rap tunes such as UGKS’s “Top Drop Dyne” to “Everybody Wanna Ball” and “She Luv It.”

The success of those tracks has led Cory Mo to become an in-demand producer in the South, working with such Houston heavyweights as Slim Thug, Big HAWK, Lil KeKe, Big Pokey, Devin the Dude, Big Mike and Scarface.

Nevertheless, Cory Mo is a true musician and his travels and experiences as Bun B’s hype man, has exposed him to different sounds and different cultures, enabling him to produce beats for every genre from pop and R&B to techno.

“Whenever I’m on the road with Bun, it just opens me up to a whole new atmosphere,” the producer explained.

And now that M.A.D. Studios, his company with his brother Mike Mo, has opened another studio in Atlanta, his horizons are continuing to broaden.

“It definitely opens up my ears and thought process to different things whenever I go to different cities, different towns…I come home and cut the beat machine on and my music sounds different…because I hear different elements.”

Although music is his passion, Cory Mo realizes music is not the money maker it was a decade ago when platinum record sales was an everyday thing.  He is now venturing into the clothing game, with a T-Shirt line called “Jus Sayin,” which can be purchased online.  He is also producing a DVD entitled “Classic Footage” that will feature footage of artists who have recorded at M.A.D. Studios like Too Short.

Regardless, it is clear that Cory Mo-produced beats will not be disappearing anytime soon.  Blessed with great mentors like UGK and Rap-a-Lot Records founder J. Prince, C. Mo has learned from the best.

“(J. Prince) taught me and my brother a lot about just staying independent…He would teach us (to) keep building.”

And Cory Mo advises up-and-coming artists to keep on building despite the obstacles.  He also emphasized the need to have thick skin because everyone will not like your art, but you cannot let it discourage you.

He is a living testament of what can happen if you do not get discouraged and continue striving towards your dreams.  Because he had that perseverance, he is now a household name in Southern rap better known as country rap tunes.  Furthermore, he is determined to be known as a great producer who understands and knows music and a proud offspring of the UGK family tree.