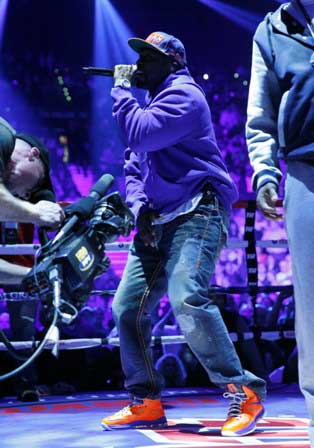 50 Cent built his career by crafting some of the best diss songs like “How to Rob” and “Back Down” (Photo Credit: AP Photo/Eric Jamison).

While Regal Magazine always promotes unity and harmony between “brothers,” competition has never been a bad thing.  Sometimes competition sparks a renaissance in someone’s career like it did for Nas in the early 2000s.

True rap battles stayed on wax and back in the day, during hip-hop’s golden era, disses were only related to an emcee’s skills or lack thereof.

From Busy Bee and Kool Moe Dee’s epic battle in the 1980s to Ja Rule and 50 Cent’s war of words, the competition for rap’s throne has always been fierce and career altering.

But even before rap, Black children would play the dozens with the objective of clowning a friend and his/her family, but in a respectful way.  To some degree, battle rap is just an extension of the dozens, but done on wax and video and broadcasted for the entire world to see.

While many are called, few are chosen as Regal Magazine ranks the 10 best diss songs in hip-hop history.

After Dr. Dre decided to leave Eazy’s Ruthless Records, he allegedly had Suge Knight of Death Row Records persuade Eazy to let Dre out of his contract.  That move ended the run of one of rap most influential groups, N.W.A., and left a lot of bad blood between the Compton, Calif. natives.

Despite losing one of his flagship artists, Eazy was smart enough to not let Dre go to Death Row and not be compensated.

The hip-hop mogul born Eric Wright rapped, “I hope that your fans understand when you talk about playing me, the same records that you make is paying me.”

Furthermore, Eazy and his new protégés Dresta and B.G. Knocc Out when on to diss Dre’s wardrobe selection during his time with the World Class Wrecking Cru.

Unfortunately, the two could not make amends until Eazy was on his deathbed, dying from AIDS complications in 1995.

9) “How Ya Like Me Now” by Kool Moe Dee—Kool Moe Dee is the perfect example of why winning a battle does not necessarily mean winning the war.  Along with KRS-One of Boogie Down Productions, nobody wanted to battle Mohandes Dewese in the 1980s; Busy Bee and M.C. Shan can attest to that.

But even though Moe Dee ripped L.L. Cool J to shreds in 1987 (sorry LL’s comeback “Jack the Ripper” was not up to Moe Dee’s caliber), James Todd Smith’s career soared, while Moe Dee eventually faded into obscurity.

However, what makes this one of the best diss songs ever was that it was purely lyrical and not personal.  Cool J stated that he was the best rapper of all time while still a teenager and O.G.’s like Kool Moe Dee took exception to it.

With one verse Moe Dee let the younger emcee know that it was on by stating, “I’m bigger and better, forget about deffer.”

Unfortunately for Moe Dee, L.L. had a bigger and better career, but this battle showcased Moe Dee’s skills to a growing hip-hop universe.

8) “Control” by Jay Sean featuring Jay Electronica and Kendrick Lamar—For awhile, the new generation of rappers seemed to be too friendly.  They must’ve been watching too much basketball and football where opponents seem more interested in taking their opponent out to dinner as opposed to taking their teeth out.

However, Compton’s newest hip-hop savior proved that there must be something in the California water because he added to the city’s list of best diss songs with his verse on Jay Sean’s “Control.”

The attack was so vicious because Lamar even went after his friends in the rap game like Drake, J. Cole and even Jay Sean and Jay Electronica.

With one song, hip-hop’s competitive nature was back thanks to Kendrick Lamer.

7) “South Bronx” by Boogie Down Productions—BDP’s KRS-One’s battle with M.C. Shan was so one –sided, even Shan’s Juice Crew comrades admitted that Kris dogged Shan out.

“South Bronx” is one of the best diss songs ever because it basically ended one rapper’s career, while jump-starting the career of the other artist.

KRS-One went from homelessness to being one of the most influential wordsmiths in the rap game because of one song.  His career longevity can be attributed to his deep intellectual capacity, because the “teacha” could teach any emcee that tried to disrupt his classroom.

KRS-One told Shan, “Party people in the place to be, KRS-One attacks, Ya got dropped off MCA cause the rhymes you wrote was wack.  So you think that hip-hop had its start out in Queensbridge, if you popped that junk up in the Bronx you might not live.”

Almost 30 years later, this song is still an anthem for the birthplace of hip-hop, the Bronx, N.Y.

While the lyrics were not particularly vicious, they were effective.

Furthermore, “Dre Day” is one of the only diss songs to be a danceable, crossover hit.

Dre raps, “Yeah it’s me so I’ma talk on, stompin’ on the eaziest streets that you can walk on.”

5) “Takeover” by Jay-Z—“Takeover” would have been higher on our list if it had accomplished what Jay-Z wanted it to accomplish and that was to humiliate then-rival Nas.  However, Nas’ response “Ether” was so brutal, many people have forgotten how good “Takeover” was.

The song did not end Nas’ career, but it had to make his entire crew and all of Queensbridge nervous for a minute.

Jay rapped, “Went from Nasty Nas to Esco’s trash, had a spark when you first started, but now you’re just garbage.”

4) “Hit ‘Em Up” by 2Pac featuring the Outlawz—No matter how educated or holy one is, you could not be a hip-hop head in the 1990s and not like “Hit ‘Em Up,” despite how ratchet the song was.

2Pac was out of line for violently attacking Biggie and his wife Faith Evans the way he did, but all is fair in rap wars one has to assume.

Kudos to Biggie for taking the high road and not responding, but the song is still evil genius.

Pac rapped, “Now it’s all about Versace, you copied my style, five shots couldn’t stop me, I took it and smiled.”

3) “How to Rob” by 50 Cent—Many careers have been established because of beef.  After all, 50 Cent became a rap icon because of his battle with Ja Rule, but for him to be genius enough to attack the entire urban music (rap, R&B and gospel) industry in 2000 was brilliant, giving him instant name recognition and an underground cult following.

“How to Rob” was one of the best diss songs because it dissed everybody from Diddy to Kirk Franklin.

The diss placed his name in the limelight after established artists like Jay-Z came back with their own diss songs in retaliation.

Nevertheless, “How to Rob” was classic and probably 50’s most clever song ever.

He rapped, “Caught Juvenile for his Cash Money piece, told him I want it all he said ‘even my gold teeth.’”  Absolute ingenuity.

2) “Ether” by Nas—Nas was criticized for comparing himself to Jesus Christ in the “Hate Me Now” video, but his beef with Jay-Z resurrected a seemingly dead career.

Everyone thought Nas’ career was over when one of the most powerful figures in hip-hop dissed him on “Takeover,” but “Ether” humbled “Hov” and established itself as one of the best diss songs in rap history.

Nas dissed Damon Dash and all of Roc-a-Fella Records stating, “Is he Dame Diddy, Dame Daddy or Dame Dummy?  Oh, I get it, you Biggie and he’s Puffy.  Rockefeller died of AIDS, that was the end of his chapter and that’s the guy y’all chose to name your company after?  Put it together, I rock h***, y’all rock fellas.”

Not only did the song resuscitate Nas’ career, the entire “Stillmatic” album contributed to his renaissance with songs like “One Mic” and “Got Ur Self A…”

1) “No Vaseline” by Ice Cube—When Cube left N.W.A. many people thought he was insane.  Despite the harsh feelings between him, Eazy-E, Dr. Dre, M.C. Ren and D.J. Yella, Cube vowed not to attack them on his solo debut.  But when N.W.A. mentioned him on “100 Miles and Runnin,’” they “set it off” like Cube said on “No Vaseline.”  Genius is not always initially celebrated, but the other members of N.W.A. eventually saw Ice Cube ‘s perspective.  In the diss, he blasted their business dealings with Eazy-E and manager Jerry Heller.  Cube criticized the group for having a White manager stating, “White man just rulin’, the n***** with attitude, who ya foolin’?  Cube alleged that Heller was cheating N.W.A. out of their money and bragged about owning his own company.  Cube branded the group as house Negroes because they had the same bank account as their manager.  Eventually, Dr. Dre would see eye-to-eye with Cube and he too left Ruthless Records to start his own company.  And years later, Cube is just as celebrated for his business acumen as his wordplay.