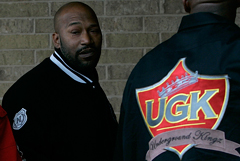 Rappers Bun B (left) and Pimp C (not pictured), better known as UGK, made some of the best country rap music to come out of the South during their tenure together (Photo Credit: AP Photo/Pat Sullivan).

From the Trill to the Trillest: Ranking UGK’s Six Studio Albums

With the 25th anniversary of UGK’s national debut album “Too Hard to Swallow” coming this year, the staff at RegalMag.com began debating the merits of the rap duo’s six studio albums on Jive Records.

While many Dirty South rap fans will vote “Ridin’ Dirty” as Bun B and Pimp C’s masterpiece, how do the other albums rank?

After all, the Port Arthur, Texas duo barely had any weak verses let alone a weak album.

With Bun’s lyrical prowess and Pimp’s swag, voice and production skills, UGK was the perfect combination.

Nevertheless, RegalMag.com has to keep it all the way trill and rank the worst to the best albums by the Underground Kingz, better known as UGK.

“UGK 4 Life”—The final studio album from UGK entitled “UGK 4 Life” was bittersweet from the beginning.  Fans had just celebrated UGK releasing their first Billboard number one pop album with “Underground Kingz” in 2006 when Pimp C was found dead in a Los Angeles hotel room in 2007.  The boys from Gulfway Boulevard, however, had already begun working on “UGK 4 Life” prior to Pimp’s death.  And while many iconic hip-hop legends wanted to be a part of the final project, Bun kept the album features to known UGK alumni like Boosie and Webbie and frequent collaborators like Big Gipp and Too Short producing another great project.  The first single from the album, “Da Game Been Good to Me,” was the perfect swan song for UGK.

“Dirty Money”—UGK’s fourth national studio album “Dirty Money” ranks so low because of the time it took to release it after “Ridin’ Dirty” came out in 1996.  Because of financial disagreements with Jive Records, “Dirty Money” came out about three years after its initial release date.  Even after its 2001 release, the album still contained instant classics like “Let Me See It” and “Choppin’ Blades” despite also containing older songs like “Take it Off,” “Wood Wheel” and “Pimpin’ Ain’t No Illusion.”

“Super Tight”—The sophomore jinx is a real thing in the music business, but it did not affect UGK.  Although fans knew it would be hard to follow-up their national debut, “Too Hard to Swallow,” Pimp C let it be known from the jump what time it was with his first verse on “Return.”  The album “Super Tight” kept the momentum going with tales of street life, and more specifically Southern street culture.  The album goes about eight songs deep before a fan would even think about skipping a track.  Songs like “Feds in Town,” “Pocket Full of Stones, Pt. 2,” and “Front, Back & Side to Side” are still three of the most played UGK songs 23 years later.

“Too Hard to Swallow”—There are very few people in the Houston urban market that can say that UGK’s first hit “Something Good” was not one of their favorite songs of 1992.  When people found out that they were from Texas, many automatically assumed they were signed to Houston’s Rap-a-lot Records.  But when it was discovered that UGK had signed to Jive Records after a short stint with Bigtyme Recordz, fans knew the sky was the limit.  However, many were upset to discover that the explicit version of “Tell Me Something Good” from their “The Southern Way” EP was replaced with the radio version.  Regardless, the new hits that accompanied the new LP, like “Cramping My Style” and “Feel Like I’m the One Who’s Doin’ Dope” fit perfectly with older songs like “Pocket Full of Stones” and “Short Texas.”

“Underground Kingz”—With “Underground Kingz,” UGK was able to achieve the mainstream attention that their fans so desperately wanted for them without compromising their vision.  Country rap tune fans got to see UGK on a second record with Outkast with “International Players Anthem.”  Furthermore, UGK fans got to see how much love the O.G.’s of hip-hop had for the group with collaborations with Big Daddy Kane and Kool G. Rap.  With Pimp spending time in prison after the “Dirty Money” release, the subject matter became more profound with songs like “Heaven” and “Shattered Dreams.”  Also, the group was able to embrace the new generation of Houston rap stars like Slim Thug and Z-Ro while also collaborating with East Coast titans like Talib Kweli.

“Ridin’ Dirty”—UGK’s 1996 album “Ridin’ Dirty” is hands down one of the best southern rap records to bless the public.  The production was perfect.  The verses were perfect, especially Bun’s verse on “Murder.”  And the stories UGK told on their masterpiece painted the perfect picture of life in Texas.  While Geto Boys had a universal sound, UGK’s sound was so unapologetically Texas that the boys from Port Arthur, Texas became many Texans’ favorite rap group of all time.  “Ridin’ Dirty” epitomized the style of music UGK wanted to make, which was country rap tunes. With no video and very little radio play, the album went Gold selling over 500,000 units.  Songs like “One Day,” “Diamonds and Wood” and “Hi Life” are some of the crown jewels of UGK’s tenure.