Despite Naysayers Like Gene Simmons, N.W.A Deserves Rock and Roll Hall of Fame 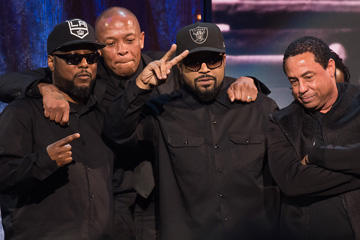 
N.W.A Deserving of Rock and Roll Hall of Fame Induction

Legendary KISS singer Gene Simmons recently stated, “Respect NWA, but when Led Zep(ellin) gets into Rap Hall of Fame, I will agree with your point.”

Simmons’ point emphasized his problem with gangsta rap pioneers N.W.A recently entering the Rock and Roll Hall of Fame and Ice Cube’s comments that rock and roll is more than just the music.

He said, “Rock ‘n’ Roll is not an instrument.  It’s not even a style of music.  It’s a spirit that’s been going on since the blues, jazz, bebop, soul, rock ‘n’ roll, R&B, heavy metal, punk rock, and yes, hip-hop.  Rock ‘n’ roll is not conforming to the people who came before you, but creating your own path in music and life.  That is rock ‘n’ roll and that is us.”

By Cube’s criteria, N.W.A definitely fits the definition of rock and roll because they changed hip-hop and life forever.

They taught people that it was OK to speak their mind.

They taught people that it was OK to dress the way they dressed.

And they taught people that even though they came from the inner city, they could take their intelligence and talent and change the world.

However, the most important reason that N.W.A meets the criteria for inclusion in the Rock and Roll Hall of Fame is that the honor has been bestowed upon non-rock singers for decades so it is peculiar that Simmons has a problem with their induction and not the induction of other hip-hop, pop, R&B and blues artists from the past.

Did Simmons complain when Michael Jackson (even though songs like “Beat It” were rock songs) was inducted twice, once as a solo artist and a member of the Jackson 5?

Did Simmons complain when The O’Jays were inducted or Earth Wind and Fire?

What about Stevie Wonder or Muddy Waters?

Did he have a problem with Clive Davis getting in?  Davis is one of the best music executives around but he’s not even a musician.

What about Dick Clark?  Was Clark ever on a record?

Berry Gordy is in the Hall of Fame but at least he wrote many hit records for artists like Jackie Wilson and the Jackson 5.

The Rock and Roll Hall of Fame stopped being about just rock and roll many decades ago.

For many years, it has honored the best the music industry had to offer regardless of genre, talent or job title.

The name Rock and Roll Hall of Fame has a catchy ring to it but a name change may have been necessary years ago.

Simmons said that rappers should not get in because they did not sing or play instruments.

Jackson never played an instrument as well but he still got in as a solo artist.

Grandmaster Flash and the Furious Five and Run D.M.C only had a turntable as an instrument and they made some of the most important songs in pop history.

However, rap groups like The Roots and Stetsasonic did consist of musicians who played live instruments on record and on stage.

Although Cube handled the criticism with class, for old times sake fans probably wish he would resort to a four-letter word directed towards police back in 1988.

That same four letter seems like it would be apropos if directed at Simmons.