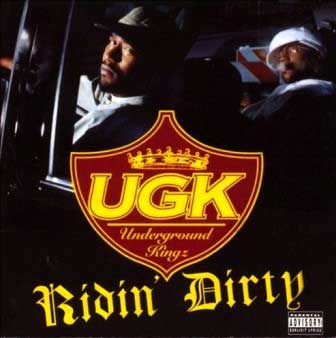 What You Know About the Dirty South?

Southern rap has possibly created the most polarizing music of all regions of hip-hop.

Critics have sometimes labeled Dirty South rappers as country or sophomoric in their wordplay.  But like it or not, the South is where music gets its soul whether it is blues, jazz, R&B, country or hip-hop.

Furthermore, by the late 1990s if a rap song was a hit, often it came from below the Mason-Dixon line.  There have been so many classic southern rap albums, but Regal Magazine attempts to rank the top 10 Dirty South rap records of all time.

While the production is simplistic and outdated when compared to other top 10 Dirty South rap records, Eightball & M.J.G.’s ability to make classic Southern funk is undeniable.  Few actually remember that Eightball was the original “Mr. Big,” not Ronald Isley, and not simply because of his size.

Although some of the songs were negative and not uplifting like some of OutKast or Scarface’s material, songs like “Armed Robbery” and “Pimps” were the high school soundtrack for many current adults who can remember when Memphis seemed as far away from hip-hop classics as Alaska.

9) “The Fix” by Scarface—Uncle Face, as Ludacris calls him, has been dropping classics since his days with the Geto Boys in the late 1980s.  Unlike stereotypical Houston rap, Scarface’s musical themes were always universal, which resulted in acclaim from hip-hop heads in every corner of the world.

“The Fix” represented the spiritual maturation of Brad Jordan, and his desire to inspire others like God’s Word had inspired him.

However, he still had typical Face bangers such as “Guess Who’s Back” featuring Jay-Z and Beanie Siegel, and produced by a relatively unknown producer named Kanye West.

Nevertheless, no matter how universal Scarface’s themes were, he never forgot where he came from and for that reason, “The Fix” makes Regal’s list of top 10 Dirty South rap records.

The song “On My Block” was one giant shout out to the Southside of Houston, putting places like Reed Road, Belfort and Scott Streets in the spotlight for the entire hip-hop community.

8) “Lost” by Eightball—Eightball proved that he could survive as a solo artist with his 1998 double-disc solo debut “Lost.”  The Memphis, Tenn. rapper showed a deeper side of his personality than many of the songs that he produced with sidekick M.J.G., and for that reason “Lost” makes it onto our list of top 10 Dirty South rap records of all time.

Despite being introspective on many songs, the “fat mack” did not stray too far from club bangers with songs like “Pure Uncut” featuring Mystikal, Master P and Silkk the Shocker.  He also brought his partner-in-rhyme, M.J.G, along for the ride with songs like “Let’s Ride” and “Put Your Hands Up.”

Furthermore, Bun B of UGK delivered one of his coldest verses ever on Eightball’s “Ball and Bun.”

However, it was songs like the title cut, which was a call to God to help him clean up his life, to “The Artist Pays the Price” that compared the music industry to slavery that allowed the rapper to shine fully.  And “My Homeboy’s Girlfriend,” the true album standout, lamented on friendship, betrayal and lust and the stress it can cause on one’s life.

7) “Trill O.G.” by Bun B—Bun B has been a legend, as one half of UGK, since 1992.  His tight lyrics and Pimp C’s swagger and production made the Underground Kingz Texas’ favorite rap group for decades.  But after Pimp C’s untimely death, his partner-in-rhyme had to find his own voice as a solo artist.

While his first two solo efforts were definitely jamming, Bun really hit the mark with “Trill O.G.,” and for that reason the Port Arthur, Texas native makes the list of top 10 Dirty South rap records ever.

With help from current hip-hop icon Drake, the veteran M.C. fully expresses himself as a solo artist without forgetting the UGK legacy.  He features Pimp C and 2Pac on “Right Now” and teams up with another Texas legend D.J. Premiere on “Let Em Know.”

However, the classic album shines most on the Drake assisted songs “Put it Down” and “It’s Been a Pleasure.”

The album has something for everybody from hip-hop heads to Houston screw-heads like “Ridin’ Slow” featuring Slim Thug, and it truly cemented Bun’s status as a solo star.

6) “The Carter 3” by Lil Wayne—Weezy has been putting it down since he was a fresh-faced teenager with the New Orleans super-group Hot Boyz, but all of that God-given talent finally peaked into his greatest LP in 2008.

Critics like 50 Cent have always said Wayne could create a great guest verse on other artists’ material, but could not make a hit song for himself.  Well, he made plenty of hits with “The Carter 3” such as “A Milli,” “Mrs. Officer,” “Lollipop,” “Got Money” and “Comfortable.”

The diminutive rapper also permanently became the voice of his hometown on the song “Tie My hands” featuring Robin Thicke, which was a sharp criticism of politicians in the aftermath of Hurricane Katrina.

While the album can sometimes be disjointed, Wayne showed his true artistry by including musical vibes from jazz, soul and reggae.  “Dr. Carter” feels like spoken word that he would perform at a jazz club.

“The Carter 3” showed that Wayne is a true performer and his artistry knows no boundaries.

Although this was OutKast’s bestselling album, it was basically their introduction as solo artists, and it unfortunately was apparently the beginning of the end for the Atlanta duo as a group.

Big Boi’s “The Way You Move” was a prototypical hip-hop banger, while Andre 3000’s “Hey Ya” helped cross the group over into pop territory, and was probably the main reason the album went Diamond (10 million in sales).

However, the double disc had more than two jams on it.  It was a complete album, with very few filler songs.

“Roses” and “Prototype” were smooth classics by Andre 3000 and “Ghetto Musick” had an up-tempo “B.O.B.” type vibe, but a mellow Patti LaBelle inspired hook.

Unfortunately, the group has not been the same since, with both members doing separate projects.  But their 2002 classic will always remind us how potent that duo once was.

At the fraternity and sorority parties, you couldn’t escape hearing “Back That Thang Up,” the title cut or “Juvenile on Fire.”

And no disrespect to Master P and his No Limit army, but the Cash Money Millionaires epitomized the New Orleans sound, boasting a roster of some of the Crescent City’s most talented M.C.’s.

The collaborative effort of Juvenile, the Hot Boyz and Big Tymers was a true family affair, and was the first time the world was exposed to such hip-hop heavyweights as Juvenile, Lil Wayne and Birdman.

Cash Money Records hasn’t looked back since the 1998 release of “400 Degreez,” still dropping hot music and finding the hottest artists.  For that reason, this classic LP makes our list of top 10 Dirty South rap records of all time.

3) “Urban Legend” by T.I.—The self-proclaimed “King of the South” might be just that and he reminds you of his royalty at the beginning of the “Urban Legend” LP.   The only problem with Tip’s reign is singling out one of his albums as the best, but “Urban Legend” basically cemented his superstardom in hip-hop circles permanently.

“Urban Legend” was not a concept album for the rapper born Clifford Harris, but in some sense it was.  Many of the songs dealt with the concept of jealousy and envy that comes from any form of success.

The fact that T.I. was dealing with so many haters and hip-hop opponents at that time is proof that his star was ascending into rarefied air.

Songs like “Motivation,” and “U Don’t Know Me” were songs that let his enemies know that their jealousy was not going to stop his blessings and battle songs like “A.S.A.P.” basically ended the careers of rappers like Lil Flip.

Furthermore, using a Jay-Z sample on “Bring Em Out” was fitting because many called him the “Jay-Z of the South.”

What makes T.I. such a successful artist and businessman is the fact that he was able to go pop, without forgetting his roots in the streets.  “Get Loose,” which featured Nelly, the perfect rapper at that time to assist in a hip-pop record, did not take away from the streetwise lyrics of other songs.

2) “Aquemini” by OutKast—Prince is said to be a big Andre 3000 fan and if that is the case, then “Aquemini” is OutKast’s “Purple Rain.”  It is also one of the top 10 Dirty South rap records of all time.

The Source gave one of the top 10 Dirty South rap records five mics (symbolizing a classic) and the LP is the perfect symbol of the group’s refusal to be boxed in to a stereotype of Southern hip-hop.

Their debut album, “Southernplayalisticadillacmuzik,” was the stereotypical rap album boasting of womanizing, partying and Cadillacs.  However, by their third album they let people know they were a totally different breed and their music was different and refreshing.

Having Raekwon on “Skew It on the Bar-B” indicated how much respect their East Coast brethren had for them.

Songs like “Return of the G” attacked their critics who despised the group’s musical evolution.  “Rosa Parks” was a controversial classic because of its name and “Da Art of Storytellin” was pure hip-hop ingenuity.

In addition, OutKast showed just how deep they were with songs like “Synthesizer,” which criticized unethical medicine and science.

1) “Ridin’ Dirty” by UGK—What you know about them Texas boys?  Well, if anyone wanted to know what life was like in inner city Texas in the 1990s, then UGK’s third major label release painted the perfect picture.

While the Geto Boys was the first group from Texas to achieve national acclaim, UGK epitomized the Texas sound more than their predecessors.  “Ridin’ Dirty” was the closest thing to a concept album to come from Texas hip-hop and for that reason it earns the highest spot in Regal’s top 10 Dirty South rap records of all time.

From “One Day,” and “Hi Life” to “Diamonds and Wood,” this classic did not contain any pop sounds, just pure country rap tunes.

On “Murder,” Bun B spits one of the coldest verses in rap history, while Pimp C gives the album its sound, swagger and style.

The album was so well-received that it went Gold without a video or much national radio play.  That is why UGK are still kings of the underground hip-hop scene despite the untimely death of Pimp C.

Our list is complete.  What did you like or dislike about it?  What album did we leave out?  Let us know your top 10 Dirty South rap records of all time!