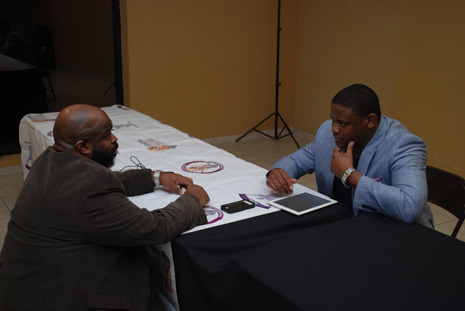 From Feb. 18-20, the biggest names in gospel music gathered at The Community of Faith Church in Houston for the 2016 Gospel Heritage International Worship Summit.

The conference was a way of honoring the legends of the industry while also teaching newcomers to the industry how to use praise and worship not just to entertain but also to edify.

During the conference, RegalMag.com caught up with iconic music producer Asaph Ward who has worked with everyone from Mary J. Blige to Amber Bullock and Smokie Norful.

Asaph Ward discussed everything from the backlash of Kirk Franklin collaborating with Kanye West on the track “Ultra Light Beams,” criticism of Christian rapper Lecrae and his critiques of the gospel music industry as a whole.

Asaph Ward: It’s my opinion, it’s not fact but I’ve been doing it for some time and have worked in secular (music) back in the 90s and prior to Kim Burrell “Everlasting Life” I was doing secular because gospel wouldn’t allow me to express myself musically.  No labels would let me produce nothing.  None of the artists would let me work with them.  So then, the Jodecis and the Boyz II Mens and all of those kinda people were like “you come on.  We want that.”  So I learned a lot of my production savvy that way.  Secular artists do things very professionally.  They do not do things the way [gospel producers and musicians] do it.  We have a way of throwing stuff together.  And because we’re anointed, it’s accepted.  We get a hall pass to just put it out.  Gospel music is one of the only genres where the artists do everything.  They write and produce their own album.  So what happens is when you get a Kirk Franklin who the world knows as a gospel giant works with a Kanye West or something like that, that is really a personal type of thing.  Let me put it this way, there are two types of secular artists.  The kind that do not care or do not fear God, then there’s the ones that do fear God but they still do secular.  I’ve actually only worked with the ones that don’t play with God.  They don’t wanna play with that.  They stay over there, they do that and if they wanna do gospel, they do gospel.  But they all have a passion for reverencing who God is.  That’s their relationship with God.  I cannot really judge that.  I don’t know what Kanye be thinking so I can’t judge that situation.  I personally don’t have a problem when secular artists merge and do things with gospel artists if the respect is there.  I’m not gonna work with secular artists that don’t fear God.

Regal Mag:  Why wouldn’t they let you do gospel initially?

Asaph Ward:  Because it’s not really business to tell the truth.  I’m sorry.  It’s about your friends, who you know.  Cliques.  I was really serious about the production aspect and labels wouldn’t really trust me.

Regal Mag: I’ve heard some people criticize Christian rappers like Lecrae, saying they don’t have the anointing.  How do you describe anointing?  And what do you say about that criticism?

Asaph Ward: We’re just judgmental people.  We’re habitual people.  We say things just because we were told things. But (my mom) let me see this documentary on Thomas Dorsey who wrote “Precious Lord.”  One of the things that people don’t know, and I wish that people would ask and find out, but Thomas Dorsey he had to start a community choir because the church wouldn’t let him sing his songs in the church.  We’re talking about the “Precious Lords” and those old-timey songs we sing now and say that’s gospel now.  They wouldn’t let him do it in the church.  They said it was R&B; it was bebop.  The point is he wasn’t respected back then.  He was being judged that it wasn’t anointed music.  Now we say what he did is anointed music today and if we ain’t doing it, it ain’t right.  It’s all about evolution.  Music is changing.  Kirk Franklin is gonna be Thomas Dorsey.

Regal Mag: Society seems to be distancing itself from God.  How do you approach that as a producer?  Do you want to write music about what’s going on in society right now or timeless music like Dorsey?

Asaph Ward: Some songwriters write timeless music.  And then some songwriters write right now music.  Everyone is not gonna write timeless music.  You’re still listening to Richard Smallwood music.  You still listen to Andrae’ Crouch’s music and the Hawkins’ music.  Believe it or not, BeBe and CeCe (Winans).  They were really criticized because they were on the R&B charts for years writing all kinda songs about God.  Because it didn’t sound like the organ and the other things, they got judged.  God says, “His ways are not like our ways.”  And because of that we really can’t say what God is putting His hands on and what He’s not putting His hands on.  I’ve seen artists that are incredibly anointed not draw the young people.  I know people who go to church now because of Mary Mary.  They would’ve never gone to church without Mary Mary and their music isn’t real gospel, gospel like that.  We just judge too much as a church.